Accessibility links
Tongan Skier Finishes Strong In Olympics After Just 12 Weeks Of Training In Snow : The Torch Shirtless flag-bearer Pita Taufatofua, a Rio taekwondo competitor turned Pyeongchang cross-country skier, came in 114th on Friday. His goal was simply to finish the race (and not hit a tree). 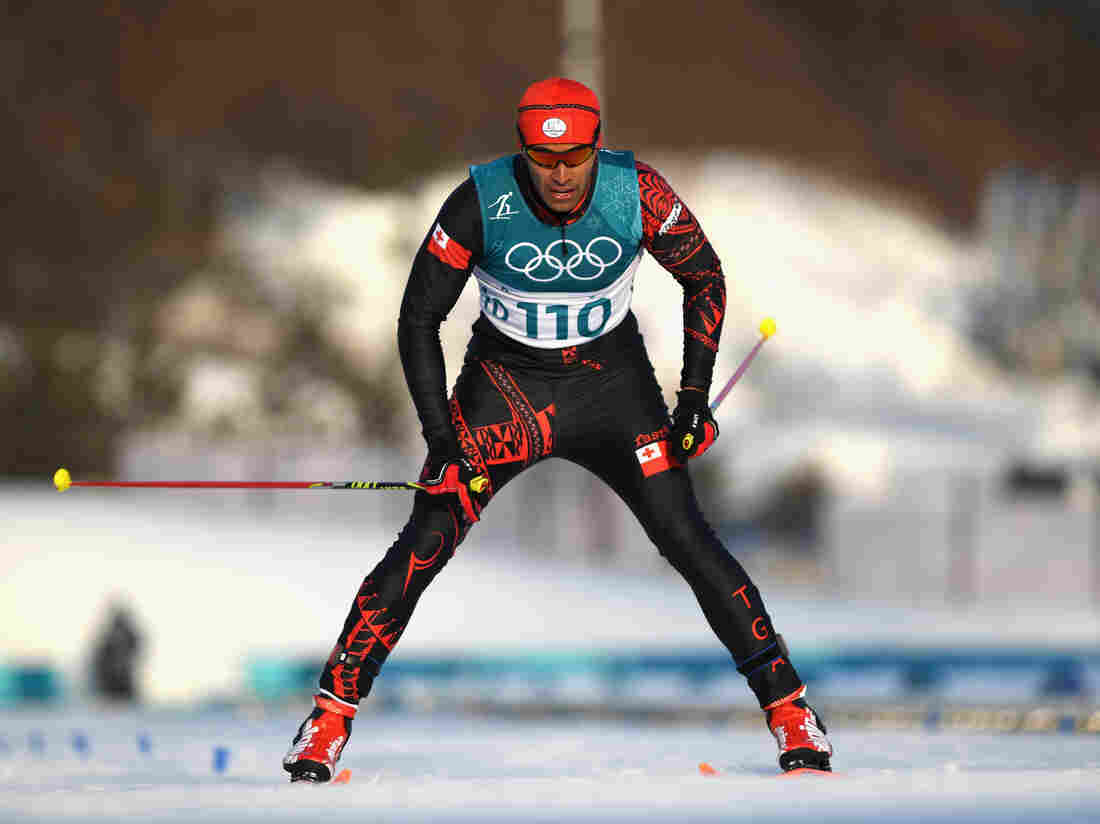 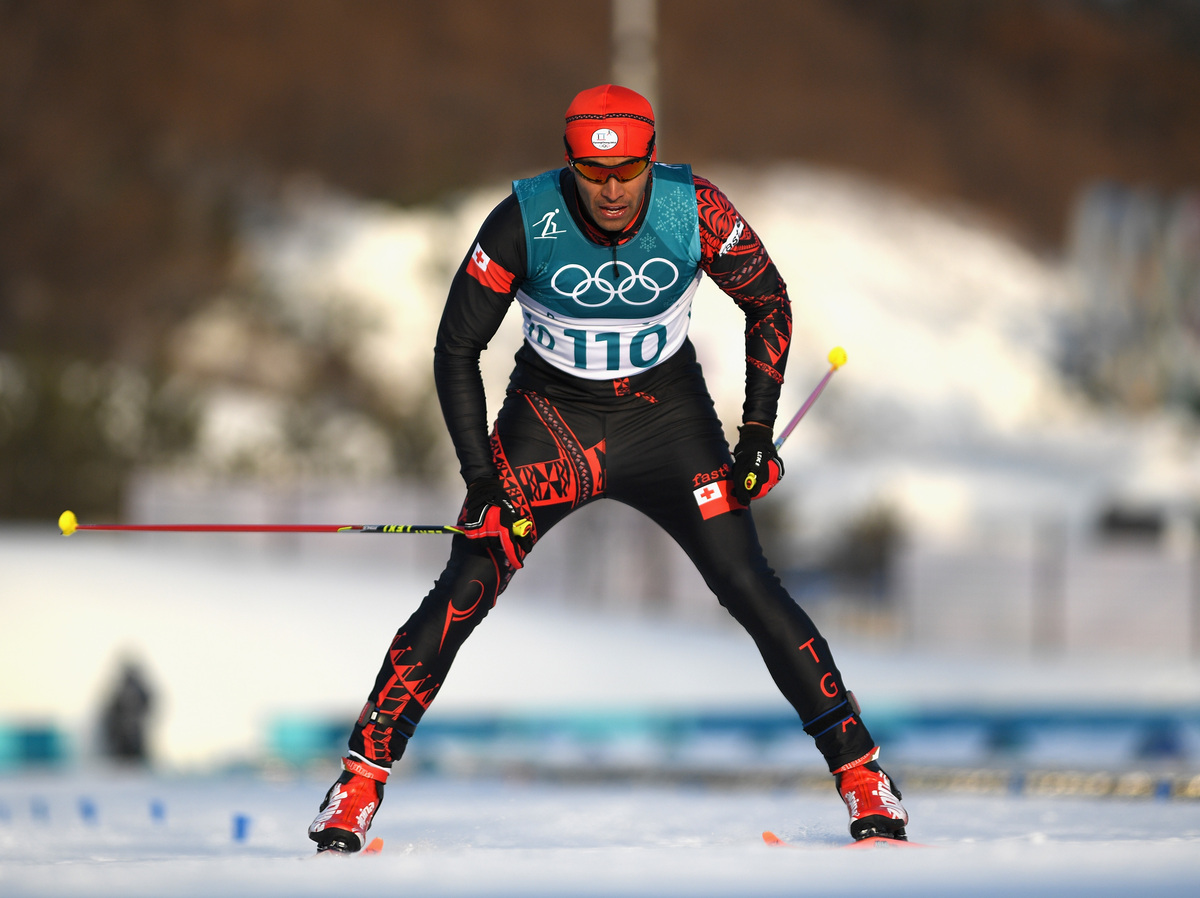 Pita Taufatofua of Tonga crosses the finish line during Friday's 15-kilometer cross-country ski competition. His goal, he'd said earlier, was to finish the race — and not hit a tree.

Pita Taufatofua, who lit the Internet on fire with his coconut-oiled, shirtless walk as Tonga's flag-bearer during the Pyeongchang Winter Olympics opening ceremony, had two goals for his cross-country skiing event on Friday.

They were not lofty — but that makes sense for a man who has tried skiing on snow for only three months.

"First step, finish before they turn the lights off," the 34-year-old told reporters. "Don't ski into a tree, that's No. 2." 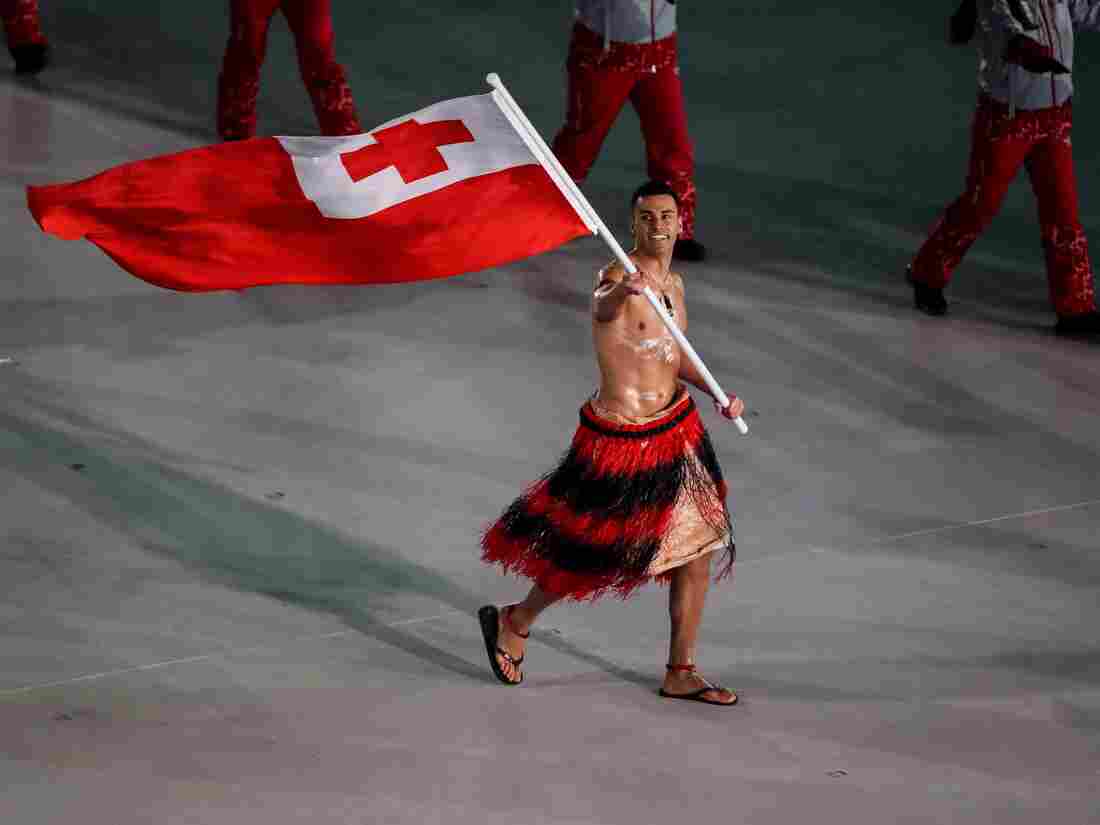 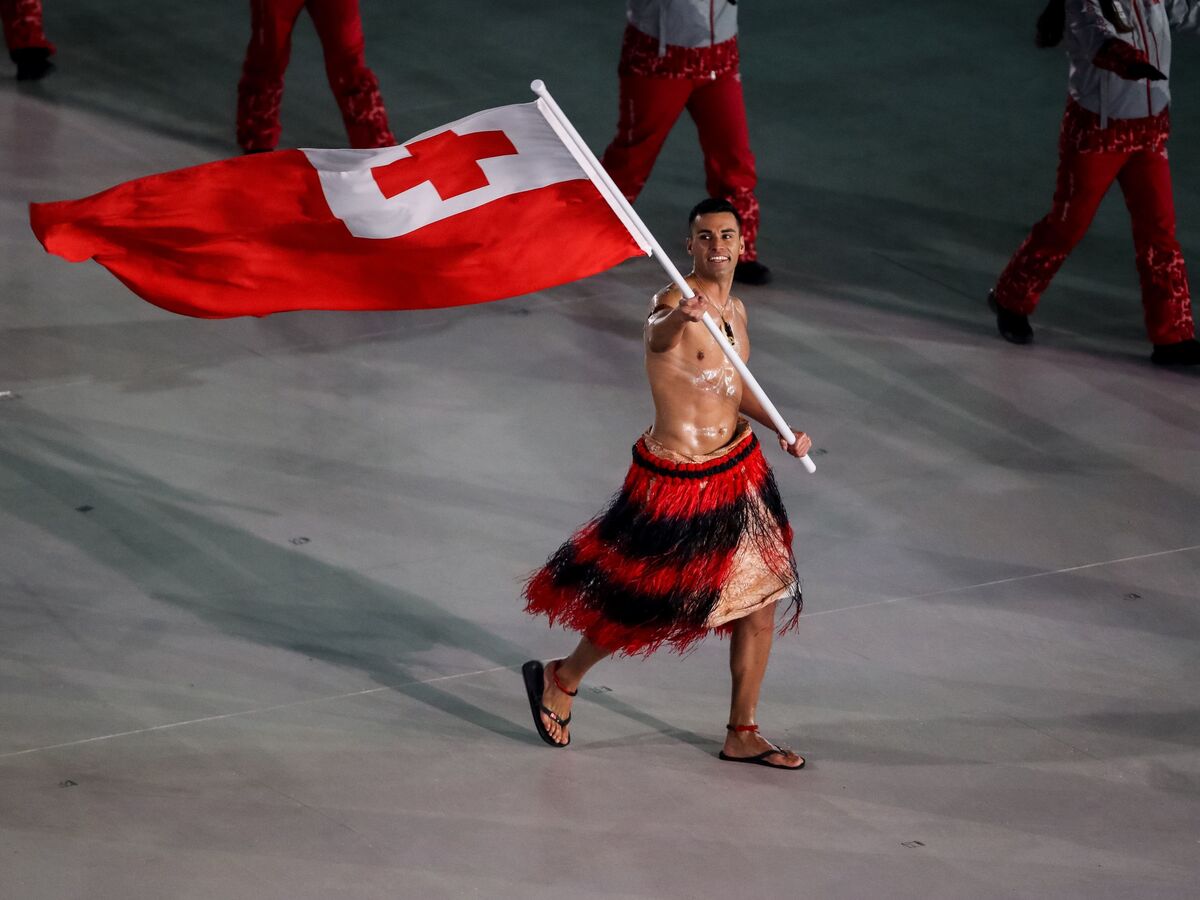 Taufatofua leads his country's delegation during the Feb. 9 opening ceremony of the Pyeongchang 2018 Winter Olympic Games.

He met both goals — and actually beat four other competitors — in the 15km cross-country skiing event.

Highlights Of The Pyeongchang Olympics Opening Ceremony, In Photos

Taufatofua competed in taekwando at 2016's Rio Olympics and was similarly a crowd favorite when he appeared shirtless at that opening ceremony. He is the first athlete from Tonga to compete in both the Summer and Winter Olympics. The Pacific island nation, located near Fiji and American Samoa, has a population of about 106,000.

In a promotional video set to a score of sweeping music, Taufatofua gives a sense of what a long shot it was for him to qualify in cross-country skiing at all.

"Here was this guy who had never put skis on in his life, from an island of sand and coconut trees," he says. "And I thought if I could do this, then anyone who's following this journey could achieve anything they want to achieve."

Couldn’t be happier! Got my best time, finished the race and didn’t ski into a tree! But more importantly I got to share the experience with all our friends from the other exotic countries who never gave up! Soo much respect to them, the medalists and all athletes from around the world who represented their countries with pride!

Naturally, Tonga's lack of snow was an obstacle in his training.

"When you've got no snow, it's really hard to learn a snow sport," he told CNN. He was attracted to the difficulty of the brutal endurance event. "The goal was to do it within a year, and we just made it within that year, but it wasn't easy."

Taufatofua studied YouTube videos of skiers and tried to find ways to mimic the feeling of being on snow, like strapping planks of wood to his feet and sliding across a beach or using roller skis. Once he got to real snow in Germany, according to his fundraiser page, he trained on rental skis that "felt like dragging a sack of sweet potatoes through the snow."

It was tough going, he told CNN, adding that roller skiing is "quite possibly the worst thing ever invented." He added: "You can't stop. ... The only way to stop is to fall. And I learned that the hard way many, many a time." One of those times was captured on his Instagram feed:

And For My Next Trick 😅 @tongaskiteam

The most intense part of this experience came as he was trying to qualify for the Olympics in January. He felt "a lot of relief" when he met the criteria — just one day before the deadline, according to NBC.

Ahead of competing in Pyeongchang, he told CNN that he felt he was "going in there without pressure."

He certainly looked happy as he started the course Friday, which is about 9 miles long. And he didn't come in last. 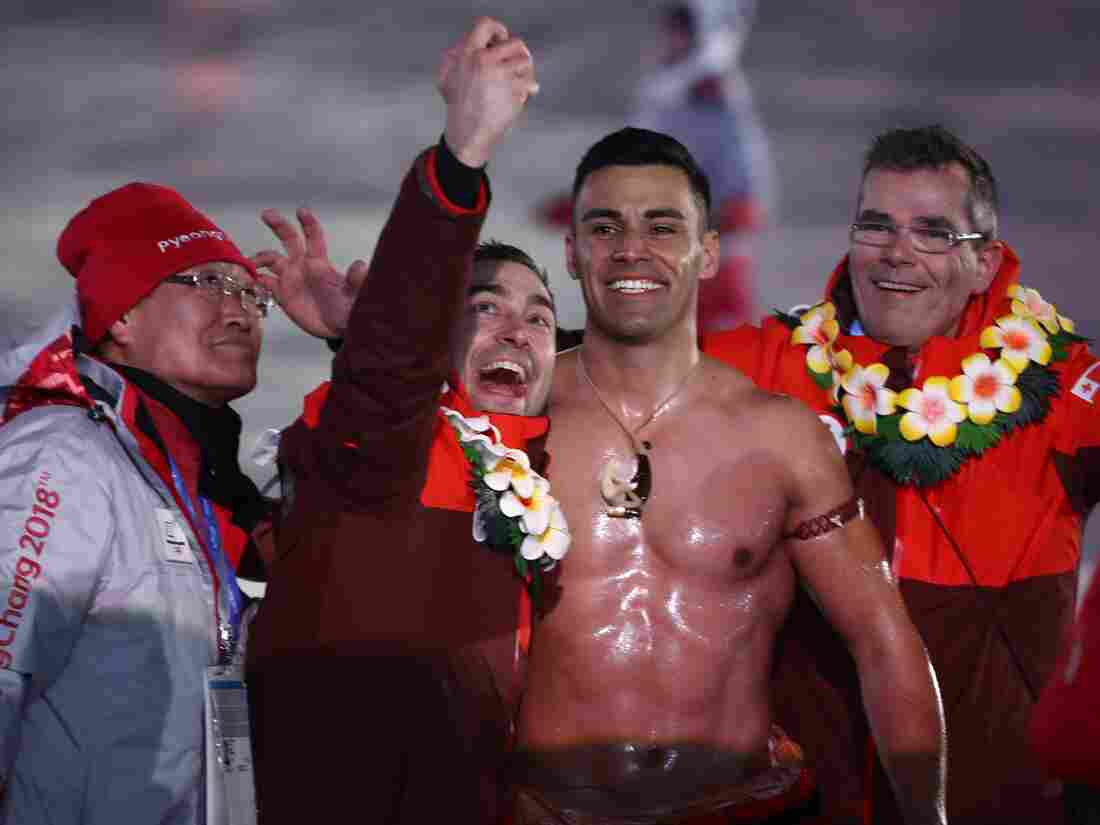 Taufatofua and another participant take a selfie during the opening ceremony. AFP/Getty Images hide caption 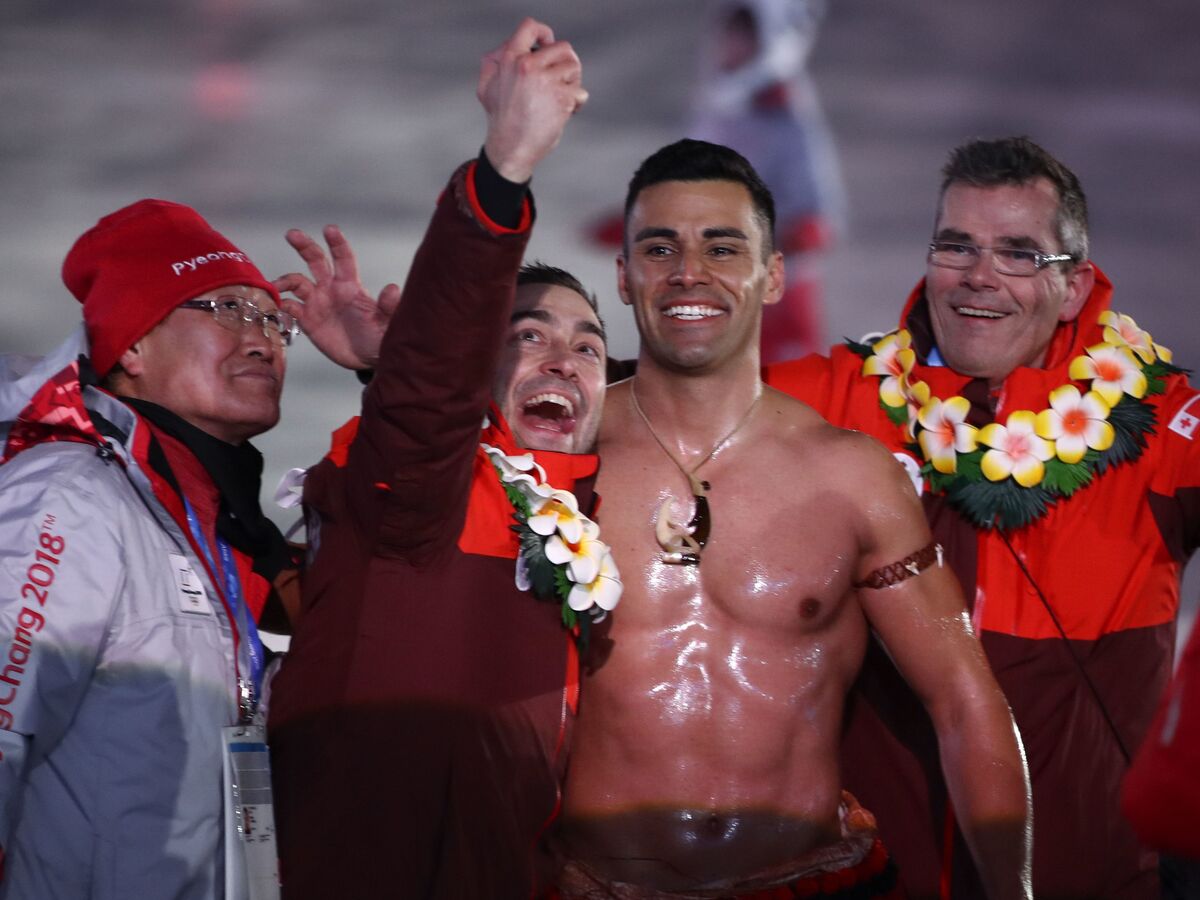 Taufatofua and another participant take a selfie during the opening ceremony.

"He looks pretty good for how long he's been skiing," the NBC announcer commented. "Twelve weeks."

Up and down hills, in red metallic glasses and a red cap, the Tongan battled through fatigue and cold temperatures.

He grinned as he surged forward to the finish line, clocking in at 56:41.1 — 22 minutes and 57 seconds behind the gold medalist, Switzerland's Dario Cologna.

What Does A Newly Born Pacific Island Say About Life On Mars?

Taufatofua was faster than a skier from Colombia and one from Mexico, and two others did not finish the race at all.

"This has always been about challenging myself, but also opening doors for the next generation ... of youth that come up from Tonga and the Pacific," he told CNN, "so that they can see that there's more opportunities outside of what they're currently exposed to."

His road to the Summer Olympics in Rio also took serious perseverance. According to his Olympic profile, he qualified for the Summer Games in taekwondo on his fourth attempt. He was the first athlete to compete for Tonga in the event. 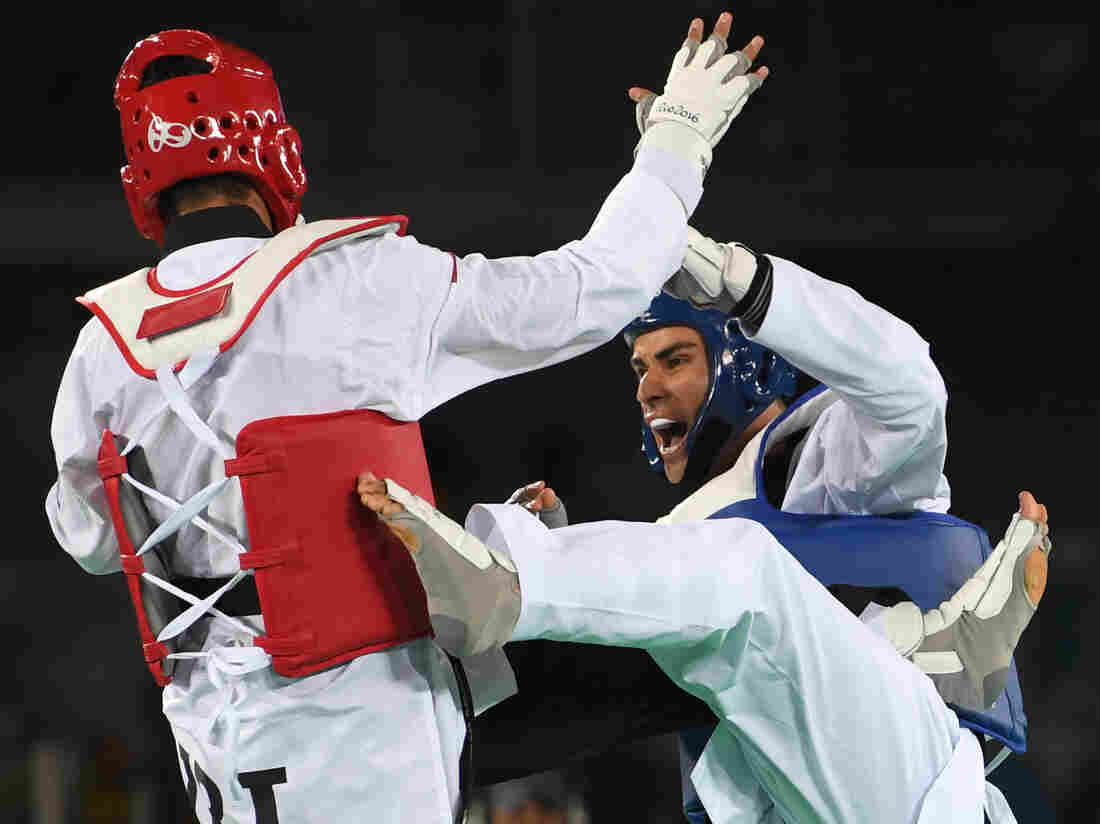 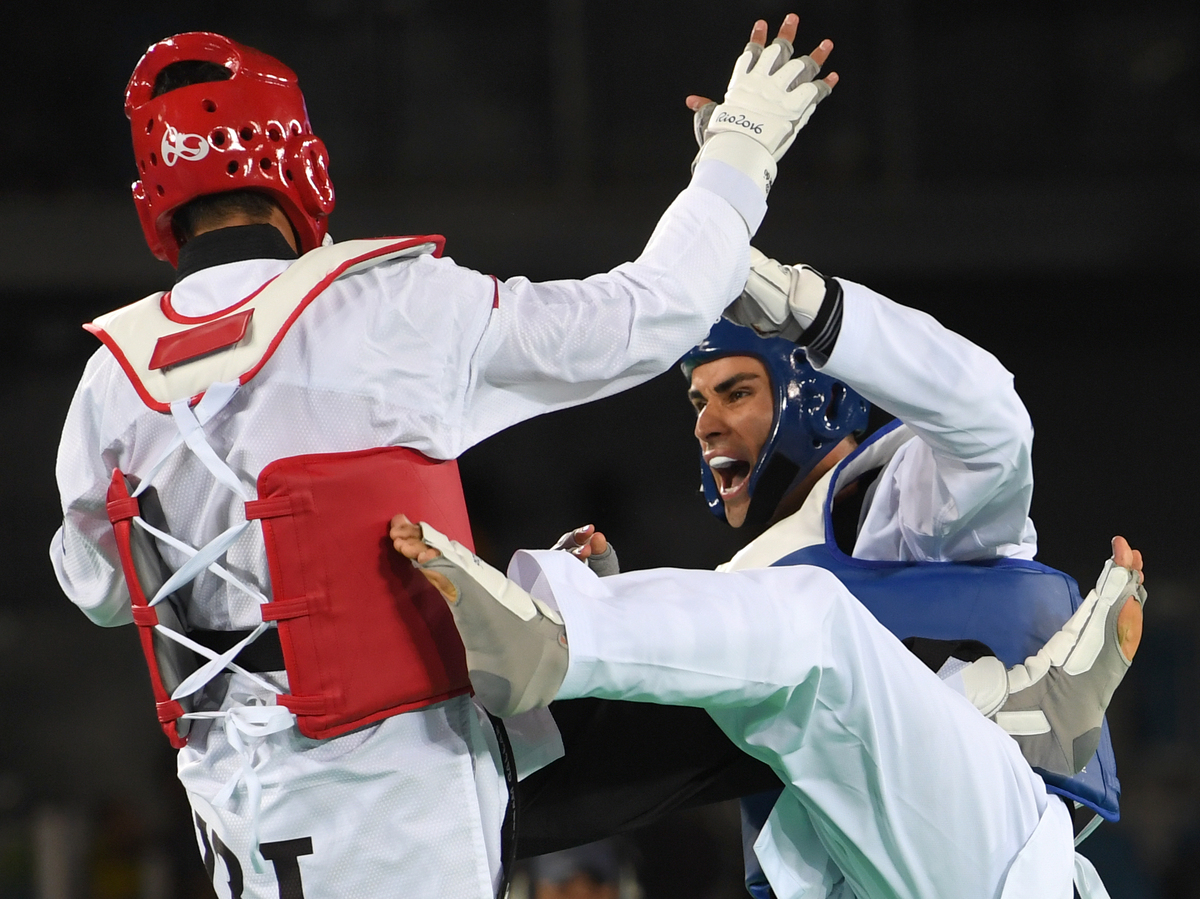 And while he seems to welcome marveling at his feat of qualifying for the Winter Games, he put his shirtless, freezing walk at the opening ceremony into perspective at a recent news conference.

"If my ancestors could sail across the Pacific Ocean for a thousand years, not knowing where the next piece of land was going to be, not knowing where their next meal was going to be, going to war, then I can walk for 25 minutes through an opening ceremony without a shirt on [in the frigid cold] and represent a thousand years of heritage," he said, according to The Washington Post. (For the record, he also notes that coconut oil is superior to olive for oiling the body.)

And luckily for all his fans around the world, Taufatofua has suggested that he is thinking ahead to the 2020 Summer Games in Tokyo.

"Maybe water is the next thing," he said. "Stay tuned."