Accessibility links
On Eve Of Olympics Debut, Jamaican Women's Bobsled Team Loses And Finds A Sled : The Torch As their head coach left the team, she threatened to take the sled with her. But Jamaican beer makers volunteered to pay for a new one just in time for training on site. 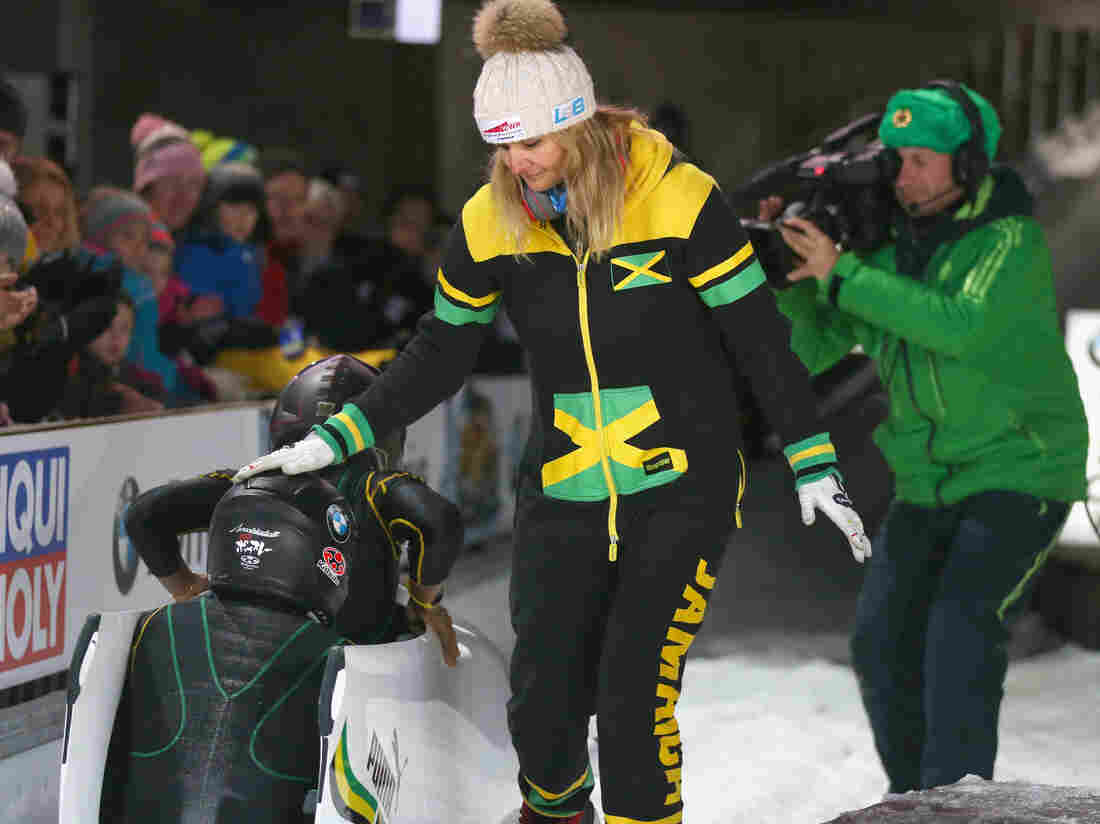 Head coach Sandra Kiriasis threatened to take the Jamaican women's bobsled with her after getting fired from the team. Alexander Hassenstein/Getty Images For IBSF hide caption 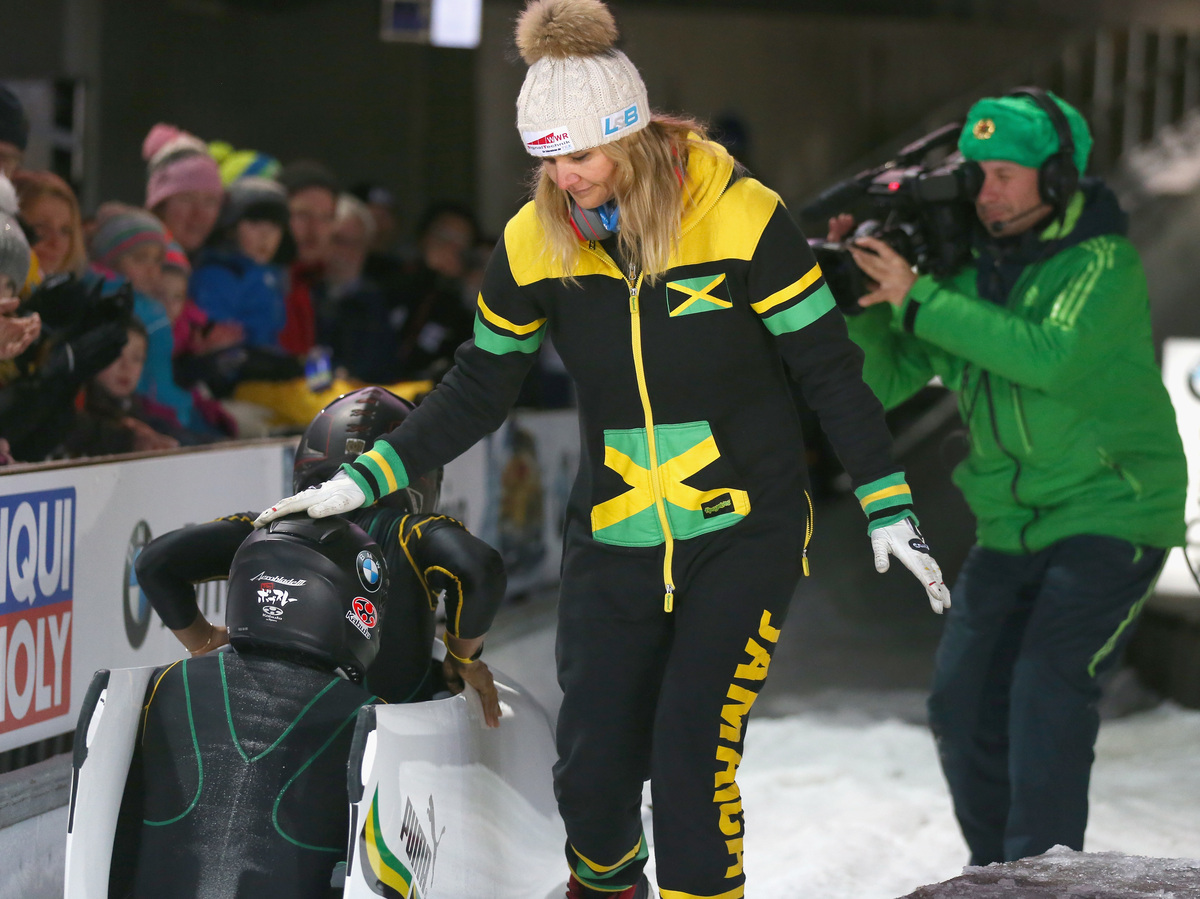 Head coach Sandra Kiriasis threatened to take the Jamaican women's bobsled with her after getting fired from the team.

The story of the Jamaican women's Olympic bobsled team was already rife with cinematic drama and imbued with a fairy tale-like quality.

Just like their male counterparts of 30 years ago — who first made it to the Calgary Olympics in 1988 and on whom the movie Cool Runnings is based — Jazmine Fenlator-Victorian and Carrie Russell are hoping to become the first Jamaican women competitors in their winter games debut.

But on Wednesday that narrative began to unravel, mostly over social media, and the team's participation in the Pyeongchang Olympics appeared to be in jeopardy.

"We are deeply disappointed in her decision to leave the program," the organization wrote, adding "Kiriasis's departure will not impact JBSF or its [athletes'] performance in the [Olympic Winter Games]."

That diplomatic messaging was almost immediately undermined by JBSF President Christian Stokes, who told Reuters, "The lady was a hugely destructive force on the team."

"Now that she is off the team, synergy is much better, tension is down and athletes are now able to focus in a much healthier environment," he added.

Meanwhile, Kiriasis claimed to have been blindsided by the announcement and when asked by the BBC about her decision she said, "I've never known such disappointment in this sport, in my life."

Kiriasis continued explaining her side of the story saying she was forced to quit after refusing to change roles from driving coach to track performance analyst. The shift would have eliminated her access to the athletes, she argued.

She insisted that she and the women on the team shared an intimate and friendly bond.

Just a few days earlier, bobsled driver Fenlator-Victorian posted a picture of the two on Instagram moments before the opening ceremony.

"Thank you Sandra for your passion, friendship, contributions, selflessness, love, support and more," she wrote in the caption." We wouldn't be here making history without your efforts and I am honored to call you my dear friend. You are forever in my heart!"

Had to get a picture with #Soohorang and my coach, the legend #SandraKiriasis at the holding area before the parade of nations for Olympic Opening Ceremony. This is when it really hits, the journey to get to this moment, the meaning behind it, the mental/physical struggles and a flood of emotions that overwhelm you in a second. . I have grown so much in the last few months, surprising myself with my abilities, reactions, adaptations and performance. Thank you Sandra for your passion, friendship, contributions, selflessness, love, support and more. We wouldn't be here making history without your efforts and I am honored to call you my dear friend. You are forever in my heart! . The White Tiger mascot Soohorang has such a significant meaning of protection, trust and strength as well as is regarded the sacred guardian animal for the Republic of Korea. It was only fitting we took a picture with him with our #passionconnected 😍💚💪🏾 . . . #pyeongchang2018 #olympics #coach #athlete #friends #famiky #strong #olympians #jambobsled #jamaica #smiles #mascot #whitetiger #korea #peace #passion #connect

The situation became even more acrimonious when Kiriasis insisted she would have to take the team's sled with her upon her departure. It was on loan to the team through a connection of the coach who said she was "legally responsible" for its use, according to the BBC.

If the team wanted to continue using it, they'd have to pay, she told the outlet.

A day later, Fenlator-Victorian posted the following message on Instagram: "Life will test your capacity to adapt before advancing you. So if you're doing all you can and the road still gets rough, you're going the right way. Push."

#embracethestruggle . Use failure as a stepping stone forward, learn from every experience and opportunity and most of all fight for yourself! . #adapt #capacity #roughroads #pavetheway #trailblaze #beyou #resilience #keepyourheadhigh

On Friday the Jamaican beer company Red Stripe offered — over Twitter, of course — to buy the team a new sled.

"No bobsled, no problem, if you need a new ride @Jambobsled, put it on @Red Stripe's tab. DM us and we'll be in touch," the company said.

The JBSF disputes Kiriasis's version of the facts and insists the team can compete with the sled they originally took to South Korea.

In any case, much of the world will be watching to see what sled the team ends up using for their historic run.

Training is getting started in South Korea and the opening heats begin on Tuesday.