Accessibility links
Nathan Chen Turns Page, Makes Olympic History By Landing 6 Quads : The Torch In a huge comeback, Nathan Chen spun around four times in the air during six jumps on the second and final day of the men's singles figure skating competition. 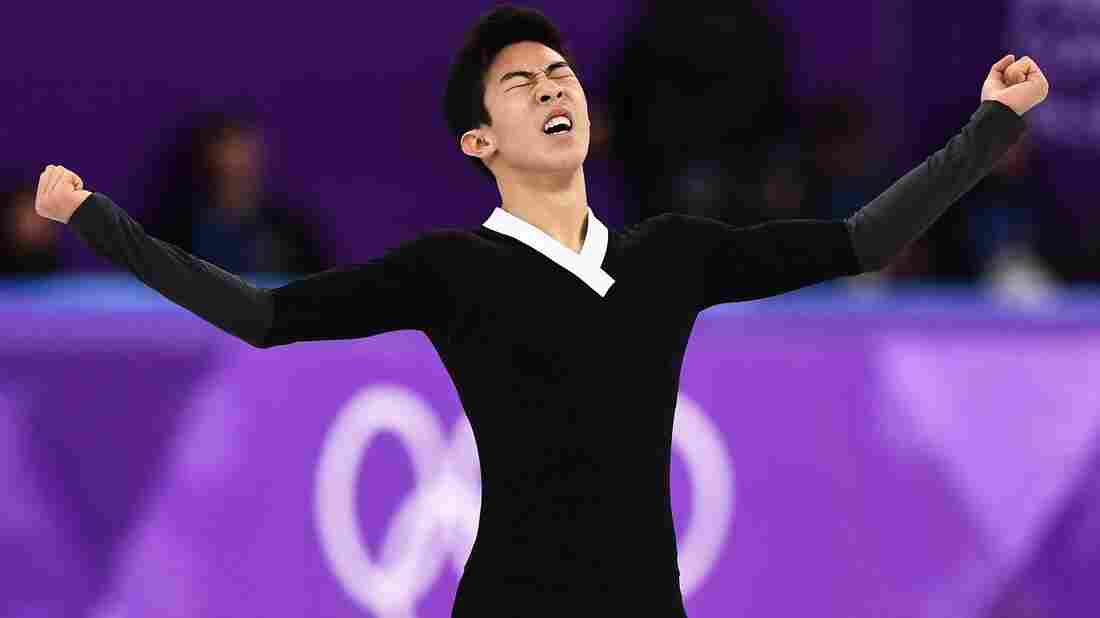 "I just wanted to leave here satisfied with what I have done and I definitely am," Nathan Chen said, after rebounding from a rough short program to make a personal-best score in the men's free skate. Aris Messinis /AFP/Getty Images hide caption 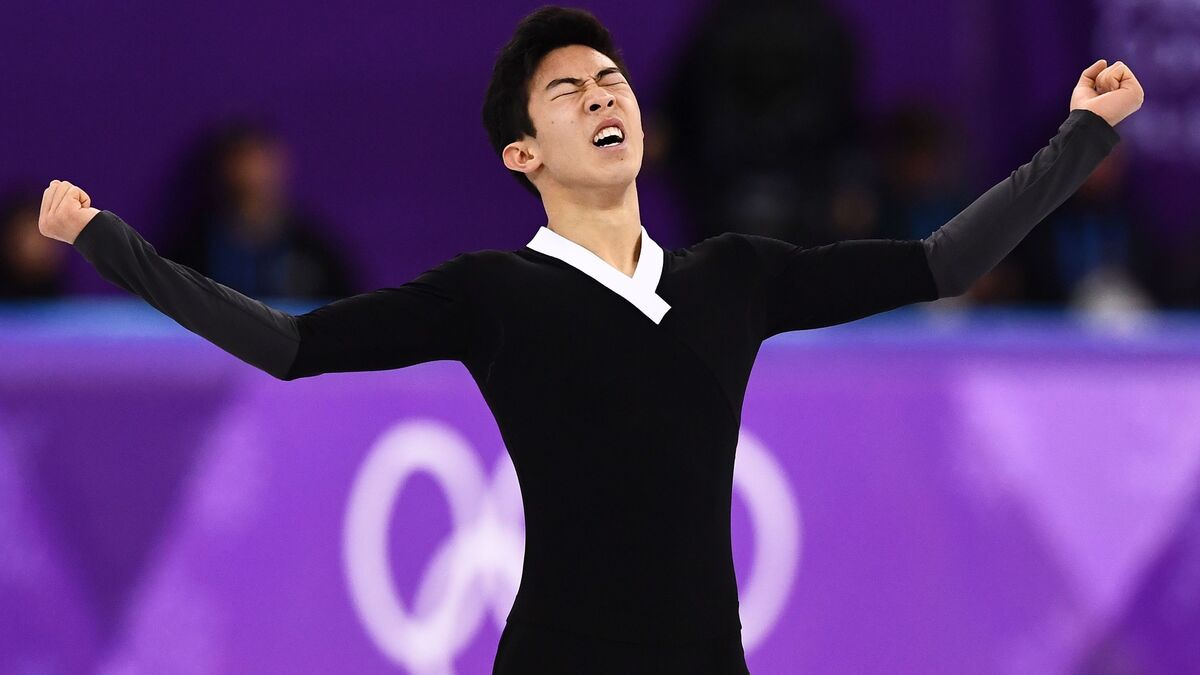 "I just wanted to leave here satisfied with what I have done and I definitely am," Nathan Chen said, after rebounding from a rough short program to make a personal-best score in the men's free skate.

Nathan Chen rewrote the story of his Pyeongchang Winter Olympics, performing an unprecedented six quad jumps in his free skate and launching himself from 17th place and nearly winning a medal in the men's singles competition.

Hanyu also made history, becoming the first male figure skater to repeat as the champion since 1952, when Dick Button accomplished the feat.

Chen finished in fifth place, after making up for his problem-plagued first skate in the men's short program the day before. All three Americans were in the top 10: Vincent Zhou was sixth and Adam Rippon 10th.

Coming into the free skate, Chen trailed Hanyu by nearly 30 points. He finished 20 points below him, with a score of 297.35 to Hanyu's 317.85. Only the three medalists topped 300 points in their combined scores.

For his final skate, Chen had planned five quads. Then he decided that he would try to spin around four times in the air during six jumps — and he pulled it off.

As Chen told NPR's Melissa Block, "Screw it. I have nothing to lose."

The six quads made history as an Olympic first; they also helped Chen earn a score of 215.08 — a personal best and the highest score of any skater on Saturday. Later, Zhou followed with a 192.16, using five quads to put himself just below Chen on the overall leaderboard.

The men's final was held at midday Saturday in South Korea — and at night Friday for the continental U.S.

With the last group of skaters remaining, Chen was in the lead with 297.35 cumulative points. China's Jin Boyang finally unseated him; Jin was eventually edged out of a bronze medal.

The skaters and spectators alike were eager to see what the top contenders — especially Japan's Yuzuru Hanyu — would do. Hanyu led all skaters coming into the second day of competition.

Hanyu, 23, did not disappoint, turning in a performance that was full of the grace and emotion he's known to create on the ice. His free skate included four quads and earned him 206.17 points — more than enough for a gold medal, when combined with the huge lead he brought into the second day.

After Hanyu's skate, fans tossed Winnie the Pooh bears onto the ice — the character is his personal favorite (and NBC reports that he donates all of the stuffed animals).

DID YOU KNOW? Yuzuru Hanyu donates all those Winnie the Pooh bears that get thrown on the ice to local charities wherever he's skating. #WinterOlympics pic.twitter.com/GJjkrND3fp

For Chen, the fifth-place finish followed a disastrous short program; he later admitted to being affected by nerves. But, he said Saturday, all that pressure was gone.

"I no longer felt like I was striving for that first-place spot," Chen said. "It mostly was just me being out on the ice an enjoying myself, playing to the crowd and really soaking in the Olympic experience."

In Chen's comeback skate, he pulled off a quad toeloop-triple toeloop jump that the judges awarded with more than 17 points.

"Definitely, there was a lot about redemption," Chen said. "Honestly, I just wanted to leave here satisfied with what I have done and I definitely am."

The 18-year-old needed to wow the judges to rekindle any hopes of a medal, after turning in an uncharacteristically raw short program the day before that left him far down the leaderboard, with 82.27 points. By contrast, Hanyu scored 111.68, with an elegant and powerful skate that put to rest any doubts about his recovery from a recent injury. 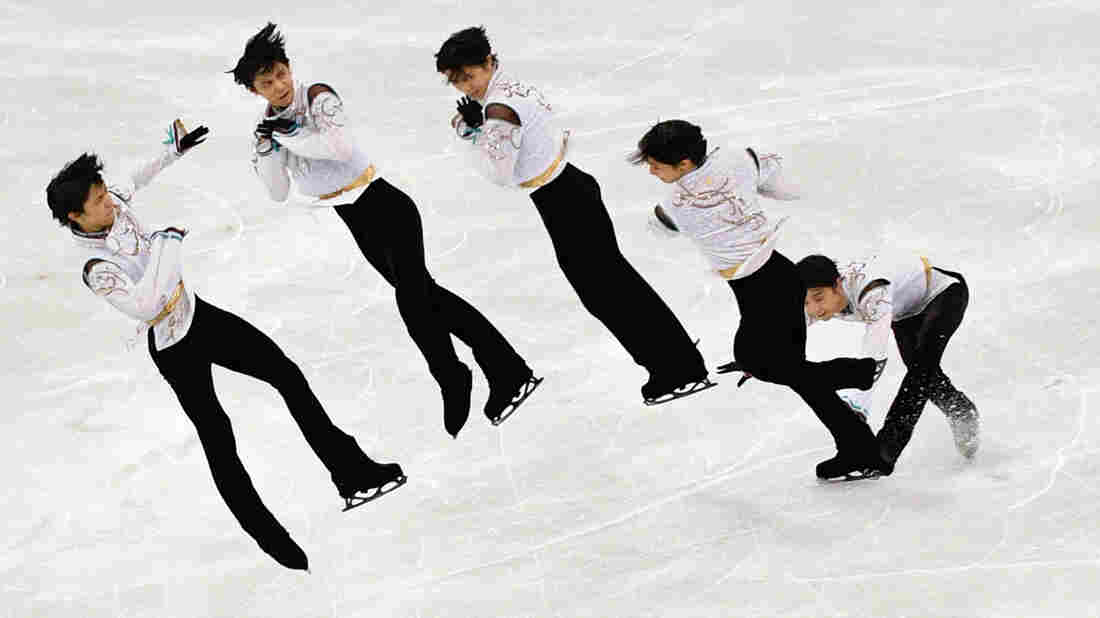 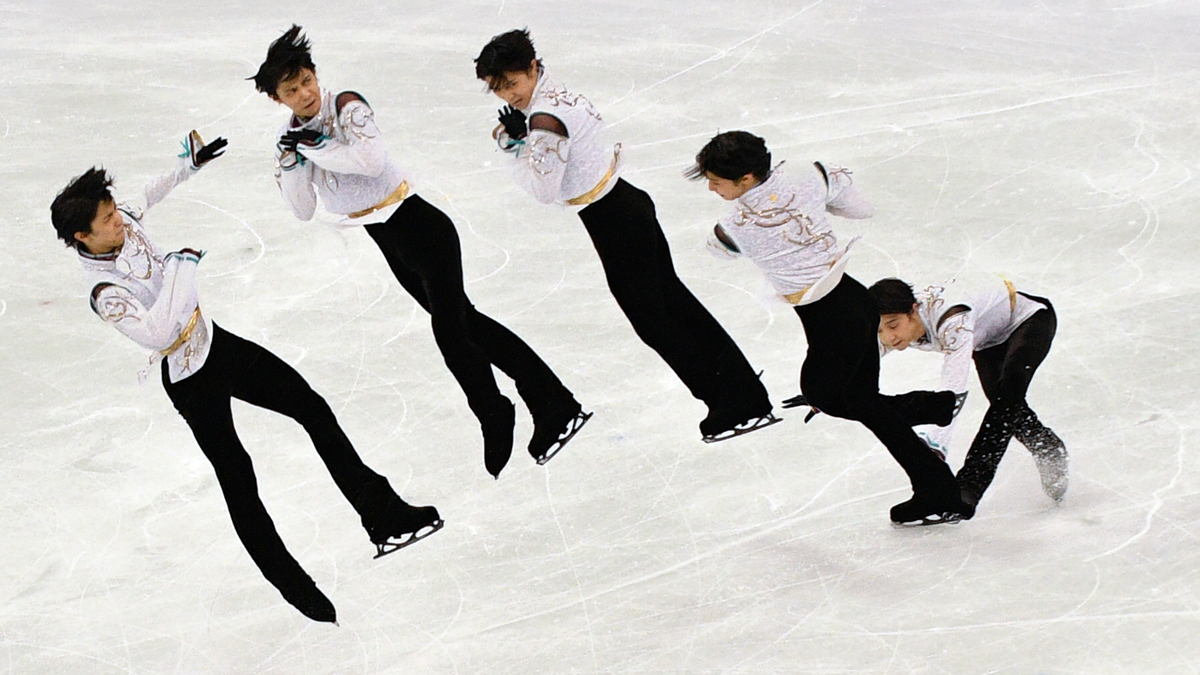 A multiple exposure image shows a portion of the free skate by Japan's Yuzuru Hanyu, the first man to repeat as Olympics figure skating champion since 1952.

Chen's performance prompted questions about his ability to handle the intense pressure of competing in the Olympics; he had similarly failed to shine in his part of the team competition. He answered those questions on Saturday in South Korea.

After Chen's skate, his teammate Zhou, 17, followed with a powerful performance of his own, setting the tone from the start with a quad lutz / triple toeloop combination that the judges awarded with more than 19 points.

Coming into the free-skate portion of the competition, the top-ranked U.S. skater was Adam Rippon, who turned in another poised and artful performance to secure his 10th-place finish.

On both days of the men's singles competition, Rippon didn't attempt any of the pyrotechnics — especially the soaring quads — that earn the highest technical scores. But the judges loved his opening triple flip — triple toeloop combination, and they also gave high marks for his skill and the way he crafted his performance.