Accessibility links
Kikkan Randall Wins Her 1st Medal In Cross-Country — A Gold — After 18 Tries : The Torch Kikkan Randall and Jessica Diggins are the first American women ever to win a medal in cross-country — and they made it gold. 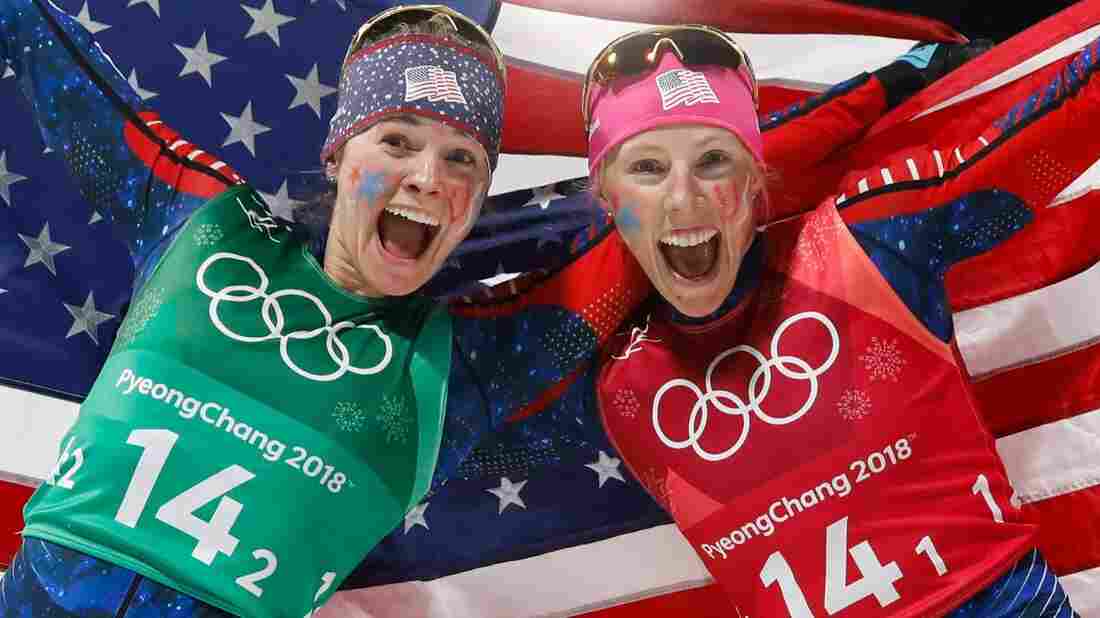 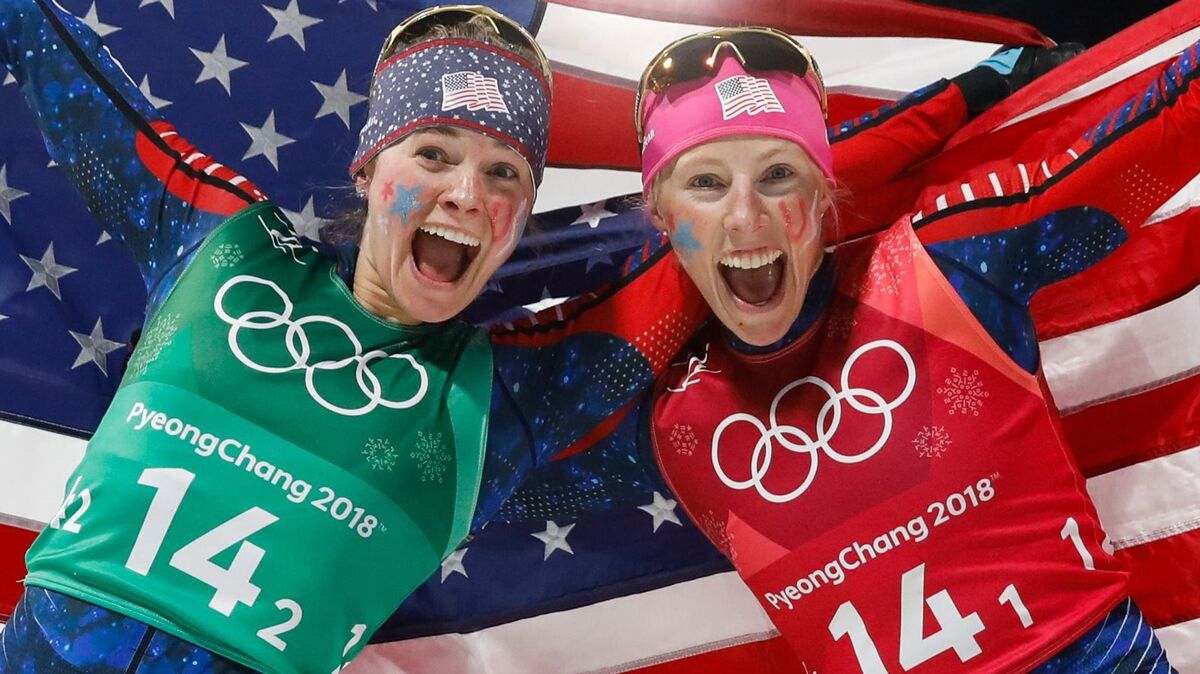 Jessica Diggins (left) and Kikkan Randall celebrate winning their gold medal in the women's cross-country team sprint free final at the Pyeongchang 2018 Winter Olympics. Randall, 35, is retiring from Olympic sports after the games.

In the last event of her last Olympics – she has been to five – Kikkan Randall finally did what no American woman had ever done: win a medal in cross-country skiing. And she made it a gold, as Randall and her teammate Jessica Diggins won the team sprint free final at the Pyeongchang Winter Olympics.

Randall and Diggins snared gold by a nose, with Diggins sprinting to the finish 0.19 seconds ahead of the Swedish team of Charlotte Kalla and Stina Nilsson, with whom they had been dueling for the entire race. The Americans covered the race's hilly 7.5 kilometers (4.66 miles) in 16:22.56.

It was also historic day for the Norwegian team that finished third – with that bronze medal, Marit Bjoergen, a cross-country legend at 37, became the most decorated Winter Olympics athlete of all time, with 14 medals in her career.

Randall had never finished higher than sixth place at the Winter Games, dating to her first Olympics back in 2002 in Salt Lake City — a string of 18 attempts, counting Wednesday's start. With plans firmly in place to retire and make a new home with her family after the 2018 Games, it seemed possible that Randall, 35, might see her career end without an Olympic medal.

Heading into Wednesday's race, all of Randall's other events in South Korea were already over, with her best showing a fifth-place finish in the women's 4x5-kilometer relay.

But Randall and Diggins pulled out a victory in the team sprint free, a grueling event in which two racers pass the relay back and forth three times. The "free" in the event's name refers to the technique used: In free, racers can use their skis' edges to skate and propel themselves, rather than relying only on the skis' center, as in the "classic" format.

Discussing her strategy, Diggins said that she wanted to push the pace early, to try to take some energy from the sprinters she was up against.

"So the last lap I was just going as hard as I could and I wanted to come behind because downhill is my favorite," Diggins said.

Then it was a matter of putting all of her own energy into the finish – and Diggins said that when she saw Randall at the finish line, "I was so excited and so happy, and also I couldn't feel my legs."

After the race, Bjoergen, who like Randall started her Olympic career in 2002, said she might not fully comprehend her medal total until she is retired.

It was a fitting race for two gritty and strong racers whose lives and careers have long been lived in parallel – from making their debuts in Salt Lake City, to having children within months of each other around two years ago.

"I'm very, very happy for Jessie and Kikkan today taking a gold medal," Bjoergen said. "I feel that it's also special that Kikkan is there, who also started her Olympic [career] in Salt Lake with me. I'm really happy for them and I also think that it's important for our sport too that they are there."

As we mentioned in our profile of the U.S. Olympic team, Randall is the only mother on Team USA. She is also one of the first women to compete in five Olympics, along with Kelly Clark, who is also in Pyeongchang.

Randall's gold medal may finally take the sting away from her experience in the Sochi Olympics in 2014, when she lunged across the finish line in a quarter-final sprint — only to learn she had been beaten. Team USA had been hoping that the cross-country drought would finally break; instead, it continued.

"Randall still chokes up when she talks about Sochi," Emily Russell reported for NPR, in a recent profile about Randall. "But another beauty of the Olympics — they come around every four years. And the American team is deeper now. Spending months together racing in Europe every year means they're closer than most teams. And they're more confident than ever."

In that story, which ran at the start of the Pyeongchang Games, Diggins told Russell, "We definitely have a chance at a medal."