Accessibility links
Sweet Redemption As Men's Curling Team Brings Olympic Gold Home To Duluth : The Torch "The Olympics are great and all," but returning home was "way cooler than the Olympics," declared John Landsteiner, an engineer in Duluth, Minn. 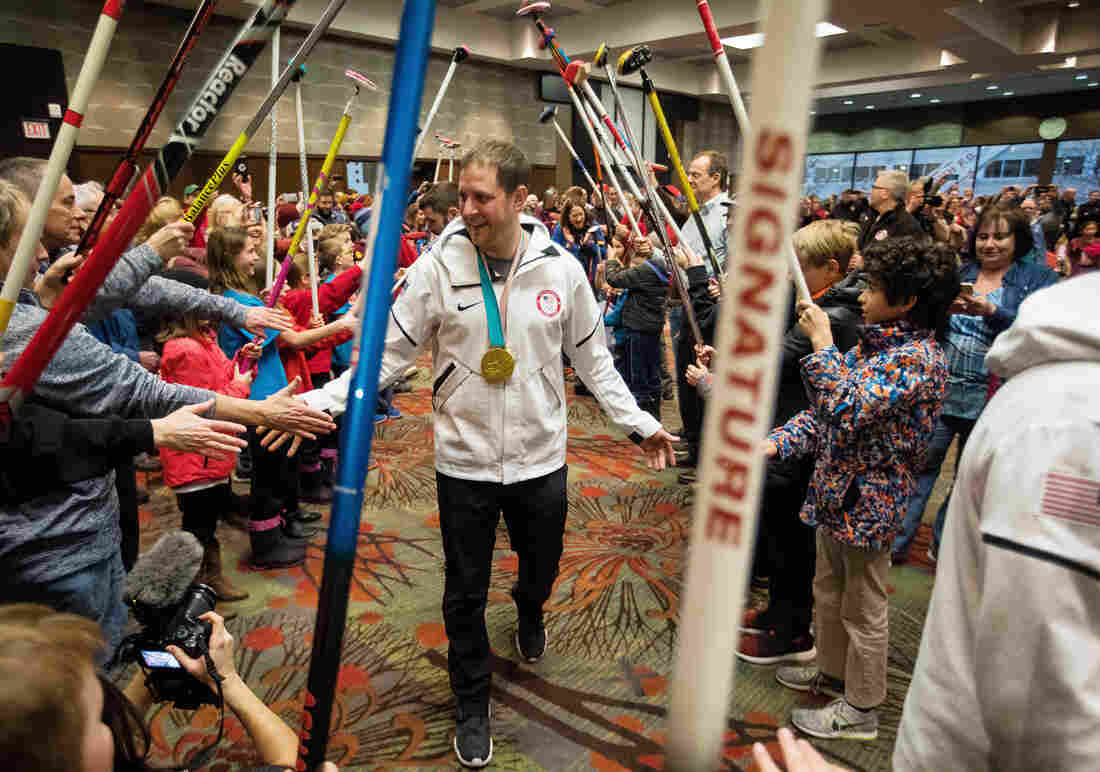 U.S. men's curling team member John Shuster is welcomed and cheered on by hundreds of curling fans under a canopy of curling brooms during a public recognition program for Twin Ports Olympians in Duluth, Minn., on Tuesday. Derek Montgomery for MPR News hide caption 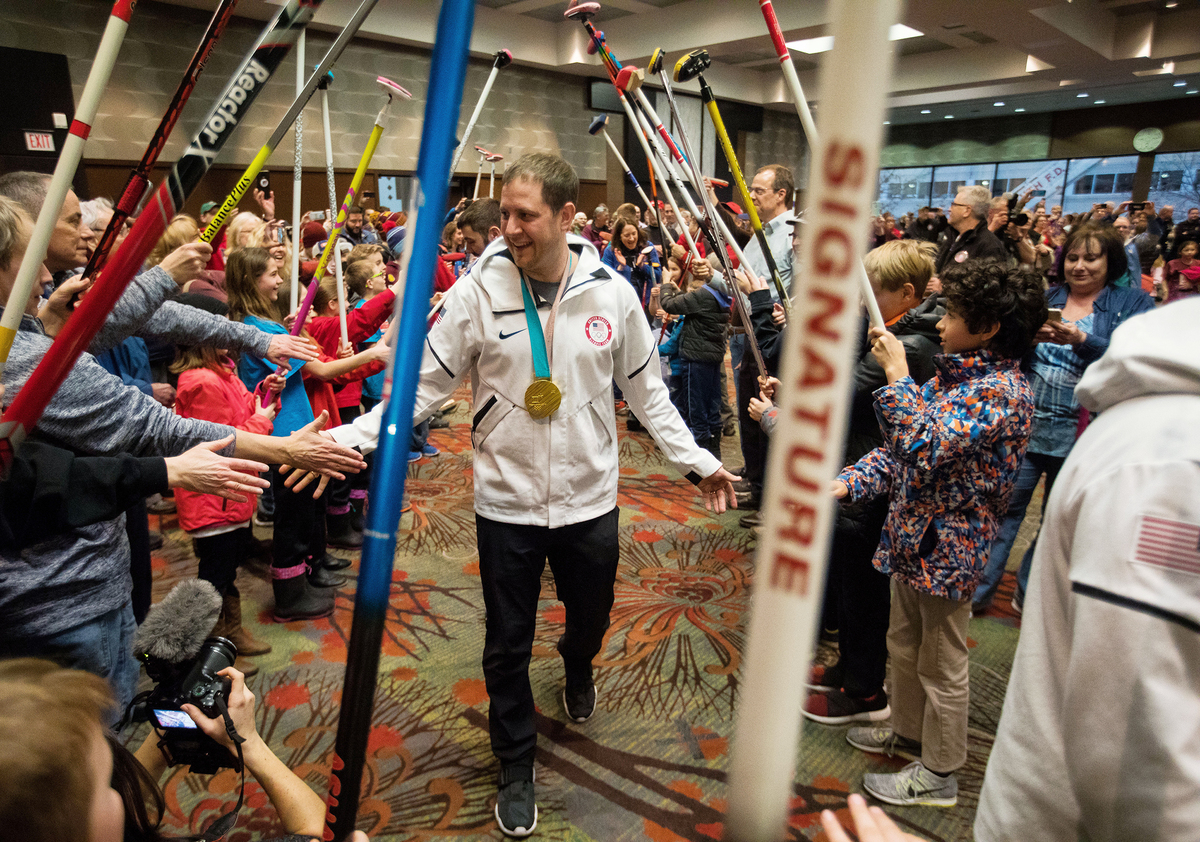 U.S. men's curling team member John Shuster is welcomed and cheered on by hundreds of curling fans under a canopy of curling brooms during a public recognition program for Twin Ports Olympians in Duluth, Minn., on Tuesday.

The gold medal-winning U.S. men's curling team received a hero's welcome Tuesday night in Duluth, Minn., sweet redemption for a team that finished last and second-to-last in the last two Olympics. They brought home the first-ever curling gold for the U.S.

To chants of 'U.S.A', four gold medalists from the men's team, along with two women's team members, followed a bagpiper into a packed ballroom through a canopy of curling brooms held up by local players.

They seemed overwhelmed by the reception.

"Well, first of all, I'm way more nervous now than I was to play for a gold medal," declared John Landsteiner, an engineer in Duluth when he's not curling. "The Olympics are great and all, but this is way cooler than the Olympics right now."

Tyler George, who owns a liquor store in Duluth, said he felt a lot of responsibility representing Team USA.

The Duluth Curling Club, where four out of the five team members are based, has been getting bombarded with phone calls.

"I love the club, love these guys, they have worked so hard to get here," said Zandy Zweibel, whose 13-year-old daughter also competes at the club.

"The juniors are incredibly excited," Zweibel said. "My daughter has done really well this year, but this has totally heightened her enthusiasm. She's totally motivated." 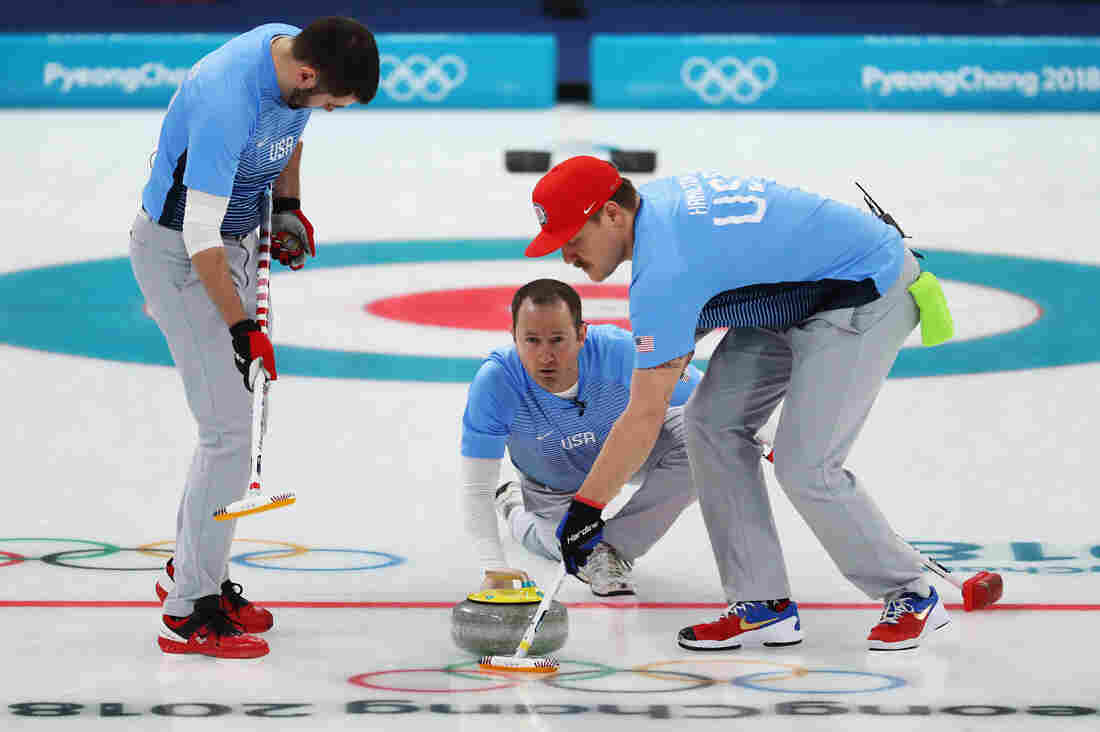 And it's not just that Team USA won. It's how the team won that has motivated so many people in Duluth and beyond.

Shuster was cut by USA Curling. But he stuck with it, formed his own team, and qualified for the Olympics again.

After a slow start in South Korea, the team improbably strung together five consecutive victories, including two over powerhouse Canada.

Shuster said this team was different.

"We always knew we had something special, and we thought that we had it in us to get up on a podium and maybe even on top of a podium," he said.

And he credited another Minnesotan for jumpstarting the team's run.

"It started with that unbelievable kick by Jessie Diggins," he said, referring to the cross-country skier's come-from-behind gold medal victory along with her teammate Kikkan Randall. "I can't tell you how much that fueled us.

"Then the ladies' hockey finally coming out triumphant, again same deal. When we got to the ice that night, you could feel it in the air."

The team even got a pre-game phone call pep talk from Mr. T.

"It was pretty awesome, he didn't give us, a pity the fool, or anything like that, but you definitely can tell, if you didn't know who was giving the speech, you could tell it was T," he said.

John Shuster lives in neighboring Superior, Wis. And he was presented with honorary keys to the city for Superior and for Duluth, from Mayor Emily Larson.

"It wasn't just that you won, it's how you won, with class, and grace and persistence, by working hard, by digging deep, sticking together, remembering who you are, by pushing against the odds, it's a beautiful, amazing story," Larson said.

As one fan in the crowd put it, it's a story so amazing, they should make a movie out of it.