"Yesterday I visited the National Archives and the hall that holds our Constitution, Declaration of Independence and the Bill of Rights," President Barack Obama just told graduates at the U.S. Naval Academy.

"I went there because as our nation debate on how to deal with the security challenges that we face proceeds," Obama said, "we must remember this enduring truth: the values and ideals in those documents are not simply words written into aging parchment. They are the bedrock of our liberty and our security."

The president added that:

"Because when America strays from our values, it not only undermines the rule of law, it alienates us from our allies, it energizes our adversaries and it endangers our national security and the lives of our troops.

"So as Americans, we reject the false choice between our security and our ideals. We can and we must and we will protect both. And that is just what you will pledge to do in a few moments when you raise your right hand and take your oath."

The president and former vice president Dick Cheney engaged in something of a rhetorical duel yesterday over the issues of torture and national security. 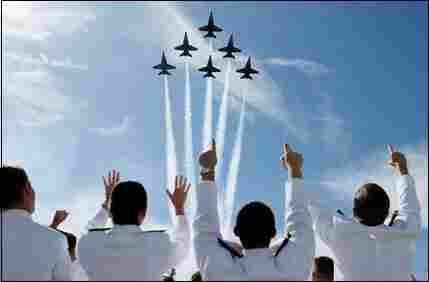