Accessibility links
150-Year Sentence For Madoff The Swindler : The Two-Way 150 years in prison for Bernard Madoff.

The sentence just came in: Bogus financier Bernard Madoff, 71, has been given a sentence of 150 years in prison for swindling investors out of billions of dollars in what's thought to be the largest Ponzi scheme in history.

That was the maximum sentence Madoff faced. His lawyer had argued for much less -- 12 years in prison.

One of Madoff's victims is Burt Ross, the former mayor of Fort Lee, N.J. He just told reporters outside the courthouse that Madoff's attempt to apologize today was "pathetic."

As he sentenced Madoff, the Associated Press reports, U.S. District Judge Denny Chin said the estimate that Madoff has cost his victims more than $13 billion was conservative because it did not include money from feeder funds.

"Here the message must be sent that Mr. Madoff's crimes were extraordinarily evil and that this kind of manipulation of the system is not just a bloodless crime that takes place on paper, but
one instead that takes a staggering toll," Chin said.

Update at 11:50 a.m. ET. The New York Post does not disappoint with its headline: 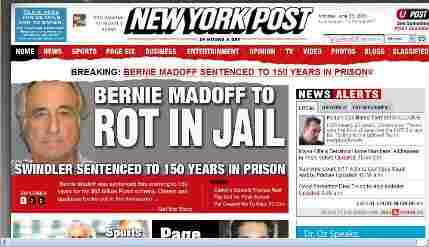 As he handed down the sentence, the Associated Press writes, U.S. District Judge Denny Chin called the fraud "staggering" and noted that it spanned more than 20 years. He said "the breach of trust was massive."

Reuters says that when Chin announced his decision, "cheers and applause came from the courtroom as Madoff stood facing the judge with his hands clasped in front of him."