That lawyer, Abdolfattah Soltani, spoke with Davar just yesterday -- telling her that the Iranian government should recount all the votes in last Friday's disputed presidential election, in which President Mahmoud Ahmadinejad was declared the winner by a 2-1 margin.

"Once they were inside they immediately confiscated his computer and other documents and they arrested Mr. Soltani," Ebadi said in today's interview. "As far as we know, they did not have an arrest warrant." (You'll hear Davar's voice doing the translation):

Ebadi, now in Switzerland, said her aides in Tehran tell her other human rights activists have been rounded up as well. (Update at 3:30 p.m. ET: She said others who have been arrested include Abdolreza Tajik, a journalist and member of Ebadi's Human Rights Defenders Center; Saeed Hajjarian, a prominent reformer; and Mohammad Ali Abtahi, another leading reformer.)

Also during the interview, Ebadi appealed to her fellow Iranians to remain calm and not give authorities any excuse to use violence against them:

And, she called on the Iranian government to do three things:

-- Free all those, such as Soltani, who have been arrested.

-- Stop the "aggressive use of force" against peaceful demonstrators.

-- Void the election results and have a new presidential vote "under the auspices of an independent body."

More from the interview with Ebadi is due on tomorrow's Morning Edition. Click here to find an NPR station near you. 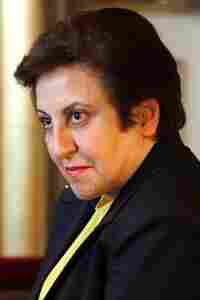 Ebadi on Jan. 30, before a meeting with France's foreign minister in Paris. Christophe Ena/AP hide caption

Ebadi was awarded the Nobel Peace Prize in 2003 "for her efforts for democracy and human rights." The Nobel committee also said that:

As a lawyer, judge, lecturer, writer and activist, she has spoken out clearly and strongly in her country, Iran, and far beyond its borders. She has stood up as a sound professional, a courageous person, and has never heeded the threats to her own safety.

According to her Nobel autobiography, Ebadi was "the first woman in the history of Iranian justice to have served as a judge." But, after the 1979 revolution:

Since the belief was that Islam forbids women to serve as judges, I and other female judges were dismissed from our posts and given clerical duties. They made me a clerk in the very court I once presided over.

As Davar and NPR's Jacki Lyden reported in February in a story about the women's movement in Iran:

Of those who tried to bring awareness to the plight of women trying to create a civil space for themselves in a theocracy, no one attracted as much attention as Shirin Ebadi. ...

In 2006, she published a book in English called Iran Awakening.

"It is not religion that binds women, but the selective dictates of those who wish them cloistered," she wrote. "That belief, along with the belief that change in Iran must come peacefully and from within, has underpinned my work." ...

Perhaps because Ebadi had become such a powerful symbol, it was almost inevitable the government would crack down on her. Ebadi has experienced intensified harassment. In December, her office dedicated to the defense of human rights was shut down and her computers seized.

Human Rights Watch says it fears for her life.