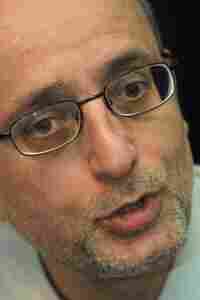 One of the founders of Iran's Revolutionary Guard, who's also a former deputy prime minister, tells Weekend Edition's Scott Simon that what amounts to a "military coup" has occurred in his country. And he claims authorities know the election was rigged.

Right after the election, 11 o'clock at night, was a military coup because they went to (presidential candidate Mir Hossein) Mousavi's headquarters -- five persons from the Revolutionary Guard -- and told him that, 'Yes, the leader says that this is true, you have won the election, you are the elected president, but you can't be the president. (Mahmoud) Ahmadinejad should remain in the position.'

"And then they started to invent those fake numbers in Ministry of Interior. And right after that they started to arrest the people, to disconnect the country, to dismiss the reporters, and that is the reason that we call it a military coup."

Here's Scott's interview of Sazegara, who became a leading dissident in Iran -- leading to his arrest in 2003 -- and now lives in the United States: