Accessibility links
'He's Really Awesome,' Girl With Presidential Excuse Says Of Obama : The Two-Way The president is "awesome," says 10-year-old who got a note from him excusing her from school. 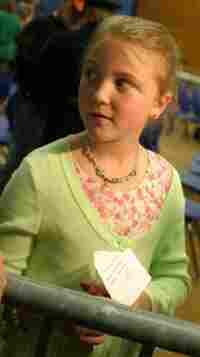 Getting the president of the United States to write a note for your teacher when you're not in school is quite a thrill. As the Green Bay Press-Gazette reports, 10-year-old Kennedy Corpus thinks President Barack Obama is "really awesome."

According to the newspaper, the note reads: "To Kennedy's Teacher -- Please excuse Kennedy's absence ... she's with me. Barack Obama."

Kennedy tells the Press-Gazette that she "plans to take it home and frame it, but she might make a few copies first, including one for her teacher."

Here's a photo of the note itself: 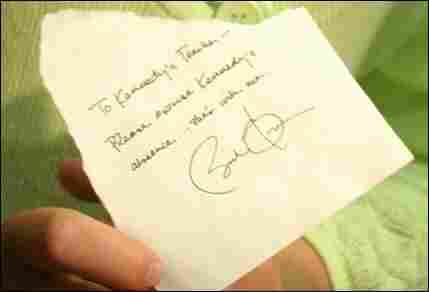 And here's how it all came about at yesterday's town hall meeting in Green Bay: