Accessibility links
Ex-Minister Yazdi Was Taken From Hospital To Prison : The Two-Way The son of one of Iran's former revolutionaries speaks about his father's arrest.

Ex-Minister Yazdi Was Taken From Hospital To Prison

Ex-Minister Yazdi Was Taken From Hospital To Prison 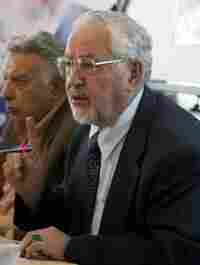 Ebrahim Yazdi, once a close adviser to Ayatollah Ruhollah Khomeini, was Iran's first foreign minister in the years immediately following the 1979 revolution. But as NPR's Mike Shuster reported in February, Yazdi broke with Khomeini and for most of the past 30 years has not been allowed to practice politics in Iran.

This week, Yazdi -- like many other opponents of President Mahmoud Ahmadinejad's government -- was arrested as authorities tried to crack down amid the protests over last Friday's disputed presidential election. Yazdi was taken from a hospital bed to prison.

In an exchange of e-mails, his son Youseph tells us what happened -- and why he expects his father still believes that Iran will be great one day:

Question: "Tell us about your father's condition."

Answer: "Needless to say, the past month has been very stressful for a 78 year old man, a prostate cancer survivor.

"His acute condition was severe dehydration. He was in the hospital when they arrested him, and now, as his health has deteriorated in detention, they are taking him back to the same hospital. When I last spoke to my mother in Tehran she was there, waiting for him. She had earlier received a call from the undisclosed place where he was held, that informed her that they were taking him to the hospital and to bring some specific medical supplies he needs.

"I think the authorities who arrested him are worried that they will be held responsible for his health should it get worse. But the fact is that when you haul someone out of a hospital bed, hold him under unknown conditions for days, then return him, you are still accountable."

Question: "What can you tell us about his arrest? Did they give any reason for his arrest? Where did they take him?"

Answer: "They came on Monday night Tehran time to arrest several members of the Freedom Movement of Iran. They picked up up Mr. Tavassoli, an official of the FMI at his office. They came to our Tehran home to arrest my father and my mother told them he was not home. They caught up with him on Tuesday in the hospital and took him in. They don't feel obligated to provide any information, or even wear uniforms. It would be hard to tell a kidnapping from an arrest.

"This is not 'Miranda rights' territory -- more like one big Gitmo.

"In past arrests, it's been the Revolutionary Court who has arrested him, under the orders of the Tehran prosecutor Mortazavi. But the situation has changed this week, and I'm not sure where he was held or who held him. I'm trying to reach him at the hospital now."

Question: "Where do you live? When did you see your father last?"

Answer: "I live in New Jersey. I last saw my father on Skype at 4 a.m. Tuesday morning East Coast time. I last saw him in person over the Christmas break in Tehran."

Question: "What have you learned from your father?"

Answer: "Optimism. Through the long dark years of the Shah's repression, he was always hopeful for Iran's future. He sees greatness in that nation, knows one day they will achieve it.

"After the revolution, it's been the same. Years of war and repression. Worse than before in many ways. But he's always kept that vision. I think this week's events are proving him right, that Iranians have raised the bar on what are acceptable standards of governance. Most see the present standard as unworthy of the stage of development Iran has attained. Leaders like Ahmadinejad are an embarrassment. My father knows Iran deserves better, and he is confident that Iranians are smart enough to get it.

"His biggest lesson has been that the opposition must be very careful in dealing with a repressive regime. The latter would love to be handed an excuse for a major military action against the marchers. He believes in the 'midwife theory' of activism. The new Iran will be born, he just wants to make sure it doesn't get dropped on its head at birth.

"He left Houston around the time Ayatollah Kkomeini was being forced out of Iraq by Saddam Hussein. Then he went with him to Paris, then to Tehran. He visits the U.S. as often as he can. The last time was four years ago, when he was invited to give lectures at a few universities and the Middle East Institute, and visited all of his children and grandchildren here."

Question: "Your reactions to the news out of Iran?"

Answer: "To borrow from Dickens, it's the best of times and the worst of times.

"The past six days have been an emotional roller-coaster. This time last week, we were preparing to vote in a reformer who would free Iran from the Ahmadinejad stain and continue the reforms that Khatami tried (and failed to achieve) years ago.

"It was a thrilling and hopeful month. The debates were incredibly open with one regime insider exposing the secrets of another. The rallies were free and youthful. The support for Moussavi was very widespread -- across class and ethnic lines. Today, it's unarmed and peaceful mass marches facing armed gangs on motorcycles. But the resolve of Iranians in the face of this is simply inspirational."

Question: "Where were you in 1979 and does what is happening today remind you at all about what you and your family experienced in 1979?"

Answer: "In 1979, I went to join my father in Iran for one year. We all saw our dreams of a democratic and free Iran come off the rails in a span of six months. I have returned every two to three years.

"There is a thrill a person gets marching with a crowd of millions that just never leaves you. Watching the crowds in Iran on Youtube, I can feel it in them. How this energy is channeled over the next year will depend on leadership in the reform movement. Perhaps that's why the regime is rounding up this leadership."

Update at 9 a.m. ET, June 19: Reuters reports that Yazdi has been released from jail.

(Davar is supervising senior producer of Weekend Edition. This week, she interviewed Iranian Nobel Prize winner Shirin Ebadi, who called for new elections in Iran. Also, Davar posted about an interview she did with a professor in Tehran and messages from a mother in Tehran. She has posted about e-mails she had received from a contact in Tehran and a conversation she had with Iranian human rights lawyer Abdolfattah Soltani.)