Accessibility links
Missing Your Dad? Talk To Someone Who Knew Him Long Ago : The Two-Way I think about my dad quite often this time of year. Not just because of Father's Day, which comes this Sunday, but also because of what I've come to think of as a second Father's Day for the Memmott family on the last Saturday each June.

Listen
Missing Your Dad? Talk To Someone Who Knew Him Long Ago 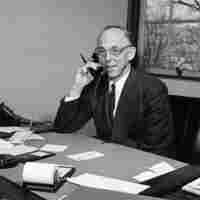 I think about my dad quite often this time of year. Not just because of Father's Day, which comes this Sunday, but also because of what I've come to think of as a second Father's Day for the Memmott family on the last Saturday each June.

And this year there's an additional reason to have Arthur Memmott (photo), who died in 1992, on my mind. Five years after the passing of our mother, the six Memmott siblings have sold the old homestead in western New York.

More on that later. First, I want to get back to that idea of two Father's Days and pass on a tip for anyone who wants to learn a little more about a parent who's no longer around:

My dad was a small town school superintendent -- actually, in his day, the title was principal. He guided Little Valley Central School from just before World War II until he retired in 1969.

How small is Little Valley, N.Y., and how small was the school (which merged with a neighboring town's in 2000)?

The village claims 1,200 residents. The school's total enrollment -- K-12 -- never got much beyond 700, even at the height of the baby boom. There were about 40 kids in my graduating class and most of us had been together since kindergarten. We knew each other pretty well.

As you might imagine, everybody in town knew my dad pretty well too. He was a stern presence in their lives from the age of four or five until they graduated at 17 or 18.

So you can bet that many of those who passed through the school have stories to tell about him. Which brings me to the second Father's Day.

The last Saturday night of every June, members of the Little Valley Central School Alumni Association gather for a dinner. Usually, 100 to 150 or so people come. There's a speech by a representative from the class that's having its 50th reunion. There's a report from Alumni President Kevin Andrew, class of '75. There's a report from my brother Ed about the scholarship named after our dad and a former school custodian, "Mother" Langhans ("Mother" was a man; so was his brother, "Peachy;" that's a story for another post).

But for me, the highlight is always meeting someone who wants to tell me a story about my dad. Maybe it was when he caught them smoking. Or when he stopped them cold with just a look as they ran down a hall. Or maybe it's a fond memory of the Latin he tried to embed in their brain (he taught as well as ran the school).

And sometimes, there are stories I haven't heard before -- such as one that Ed tipped me off to recently. He'd been talking with a fellow member of the class of '58. What Becky Milks Shakarjian told him was a story none of the Memmott kids had heard before. It's so good I had to call to have her tell me it herself.

Essentially, Becky says that when she was in second grade her legs got burned in an accident. My dad went to her home each day for several weeks to carry her to our car and then take her to school. At the end of the day, dad brought her home. As Becky says, "I don't know that you'd ever find someone today who would do that, but he sure did that." Here's some of our conversation:

This brings me to my tip: If you're missing your dad, talk to one of his old friends. Maybe someone he grew up with. Maybe an old co-worker. Or if he was a teacher like my father, look up a former student or two.

Odds are you'll hear something new. Not the wonderful, but oft-told stories that have become family legend. Something different. If you're lucky, it might be something touching like what Becky passed along.

Finally, with a bit of a sigh, to the house. Here it is in all its spring glory with the rhododendrons blooming. We'll miss it. But I hear it's going to another family with many kids, which sounds just right. I hope they enjoy it as much as we did -- and that, perhaps, if I stop by sometime I can hang out on the porch. 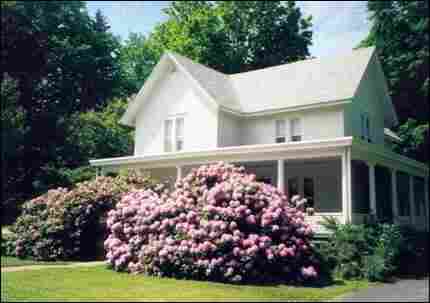