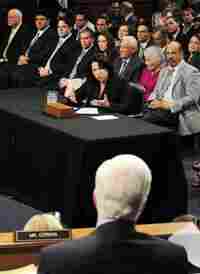 Supreme Court nominee Judge Sonia Sotomayor is back on Capitol Hill for Day Three of her confirmation hearing before the Senate Judiciary Committee.

We'll update this post with some highlights, so be sure to hit your "refresh" button to see our latest additions.

Update at 2:45 p.m. ET: For those who take note of such things, Sotomayor was just questioned by Sen. Arlen Specter of Pennsylvania (a Republican-turned-Democrat making his first appearance at a Supreme Court confirmation hearing since switching parties) and she's now being questioned by Democratic Sen. Al Franken of Minnesota (a comedian/radio host making his first appearance at a confirmation hearing).

Sen. Tom Coburn, R-Okla., just tried hard to get Sotomayor to talk about the landmark Roe v. Wade abortion case and whether advances in medical technology -- which Coburn, a physician, noted make a fetus "viable" at 21 weeks -- should be considered in a review of Roe v. Wade. Sotomayor basically said she can't answer a hypothetical. And at one point she tells Coburn that "we don't make policy choices in the court." Here is some of their exchange:

If she was never asked by the president's aides about her views on abortion and other key issues, how could the administration have assured "pro-choice" advocates that she would rule in their favor, Sen. John Cornyn, R-Texas, asks Sotomayor.

The nominee says she does not know what the basis was for any such assurance, and that as a judge her decisions on such cases are based "on the law."

Update at 9:41 a.m. ET: Pressed by Sen. John Cornyn, R-Texas, about her statements that "wise Latina" women might make better decisions than white men, Sotomayor says, "it is clear from the attention that my words have gotten ... that my words failed; they didn't work." Yesterday, she said that "I do not believe that any ethnic, racial or gender group has an advantage in sound judging."

Update at 9:34 a.m. ET. Sen. John Cornyn, R-Texas, is this morning's first questioner. He says he wants Sotomayor's "assistance" in reconciling her tenure on lower court benches and things she has said and written in speeches and published works.

If you want to follow the hearing in real time, NPR.org, courtesy of The NewsHour with Jim Lehrer, is streaming the proceedings. Click here for that. So are the Judiciary Committee itself, C-SPAN and just about every other major news media outlet with a website.

Both Morning Edition and All Things Considered will be on top of the story as well, and NPR is broadcasting a one-hour recap of the day's events on most member stations each evening as the hearing continues. Click here to find an NPR station near you.