Accessibility links
Obama Beer Photo Op Now White House History : The Two-Way The first and last White House Rose Garden beer-drinking session to stem from a disorderly conduct arrest has happened. It was essentially a photo op meant to answer Rodney King's age-old question "Can't we all get along?" with an emphatic yes. 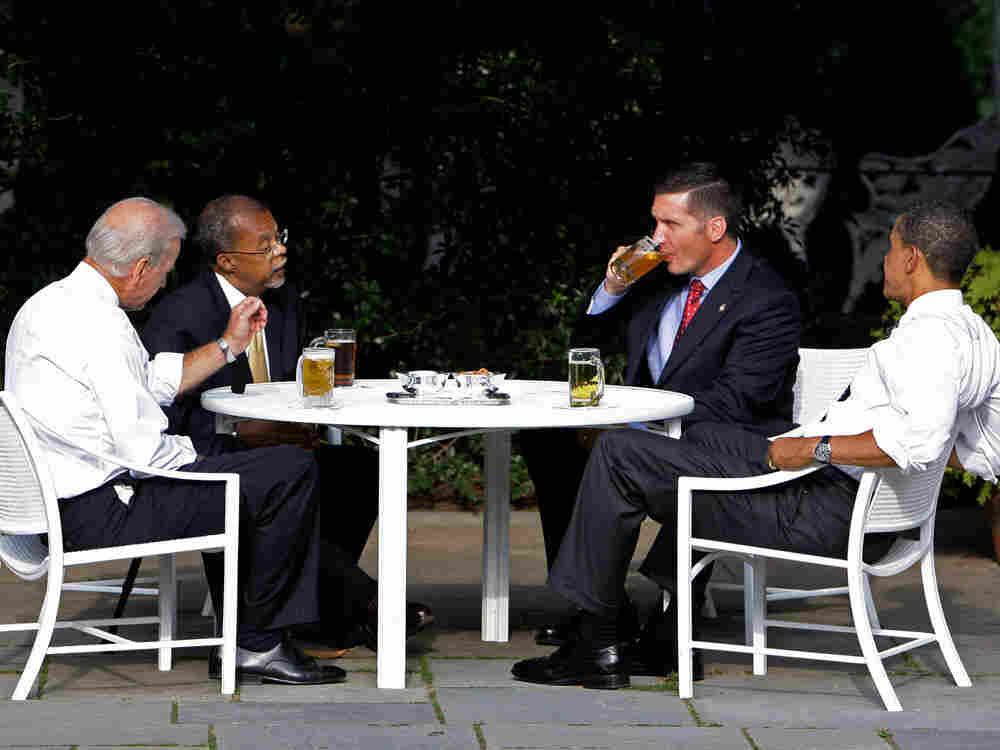 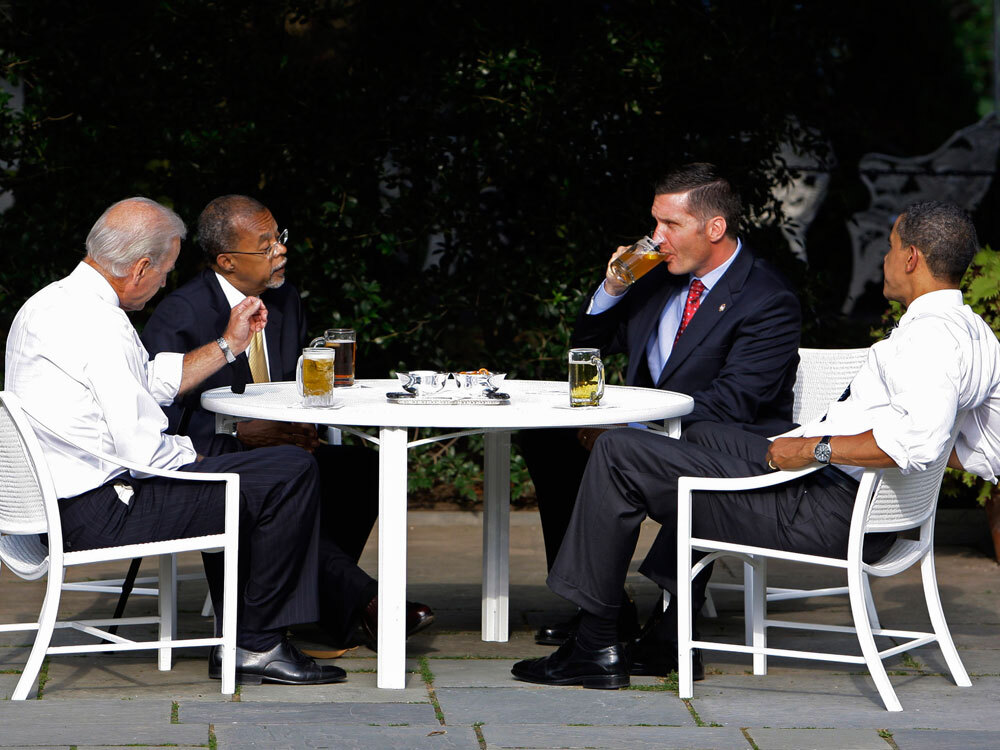 -- Updated at 8:00 pm ET Police Sergeant James Crowley spoke to the media a short while ago. He was asked what was accomplished today:

"I think what was accomplished was this was a positive step in moving forward as opposed to reliving the events of the past couple of weeks. In an effort to move just not the city of Cambridge, or two individuals, past this event but the whole country, to move beyond this and to make this the basis of maybe some meaningful discussions in the future."

What you had today was two gentleman agreed to disagree on a particular issue. I don't think we spent too much time talking about the past. We spent a lot of time discussing the future.

He also shared an interesting anecdote. As their two families were on individual White House tours, Gates approached Crowley.

Gates introduced his family; Crowley reciprocated. Then the Gateses and Crowleys continued on with their tour, not as two separate groups, however, but one larger group.

-- Updated at 7:20 pm ET The White House has issued this press release with a statement from the president:

"I am thankful to Professor Gates and Sergeant Crowley for joining me at the White House this evening for a friendly, thoughtful conversation. Even before we sat down for the beer, I learned that the two gentlemen spent some time together listening to one another, which is a testament to them. I have always believed that what brings us together is stronger than what pulls us apart. I am confident that has happened here tonight, and I am hopeful that all of us are able to draw this positive lesson from this episode."

The first and last White House Rose Garden beer-drinking session to stem from a disorderly conduct arrest has happened.

It was essentially a photo op meant to answer Rodney King's age-old question "Can't we all get along?" with an emphatic yes.

We don't know yet what they talked about. Crowley is supposed to speak to journalists within the hour.

But we do know that White House types would be nothing short of overjoyed if today's beer chat allowed them to put the whole sorry episode in their rear-view mirror and get on with the task of running the country.

One surprise was the vice president's presence. He hadn't mentioned as a participant. There are a few possibilities for why he was there.

Scranton, Pa.-born Biden has been Obama's emissary to working class white Americans, especially men. So having him there arguably made some sense.

Another possibility is that it was done for symmetry. Instead of having two black guys appearing to double-team a white guy, Biden's presence brought parity.

According to Mimi Hall of USA Today who witnessed the scene for the rest of the print press corps and wrote a report for us:

The men were drinking beer from clear glass mugs and munching on peanuts and pretzels served in small silver bowls.

In the 30 seconds your pool was out there, Sgt. Crowley was doing most of the talking. Gates appeared to be leaning in, listening intently. At one point, POTUS laughed heartily.

Gates and Crowley wore dark suits. POTUS and VPOTUS were in white shirts, jackets off. POTUS had his sleeves rolled up.

Both Gates and Crowley brought their families to the White House and they toured the East Wing together before the sit-down. Gates brough his kids, fiance and father. Crowley brought his wife and kids. The men met POTUS in the Oval Office before moving out into the Rose Garden.

During the sit-down, the family members were given a tour of the West Wing.