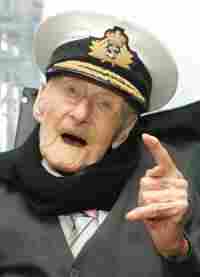 He really skewed the number: Henry Allingham, possibly the world's oldest man at the time, died Satuday at the age of 113. Allingham was a veteran of WWI. Photo taken June 6 by Geoff Caddick/AFP/Getty Images hide caption

"By the year 2017, the world -- for the first time -- will have more people 65 and older than children younger than 5," NPR's Joseph Shapiro reports. And, he adds, "people 80 and older -- they're called the 'oldest old' -- are already the world's fastest growing age group."

That news comes from a National Institute of Aging report on An Aging World: 2008.

Among the report's conclusions:

In one sense, the reality of global aging represents a triumph of medical, social, and economic advances. In another sense, population aging produces myriad challenges to social insurance and pension schemes, health care systems, and existing models of social support. It affects economic growth, disease patterns and prevalence, and fundamental assumptions about growing older. ...

Given current policies, the costs of pensions, health care, and long-term care will lead to major increases in public spending in most member nations over the next half century.

It also finds that the life expectancy at birth now exceeds 80 years in 11 countries (though not in the U.S., which comes it at 78.1 years.