Accessibility links
'Cash For Clunkers' Ends Today Amid Questions About Its Ultimate Impact : The Two-Way The federal government's "Cash for Clunkers" program is scheduled to end at 8 pm ET today after burning through the $3 billion Congress allocated to it. The program, with its taxpayer funded rebates of $3,500 to $4,500 depending on which gas guzz...

'Cash For Clunkers' Ends Today Amid Questions About Its Ultimate Impact

'Cash For Clunkers' Ends Today Amid Questions About Its Ultimate Impact 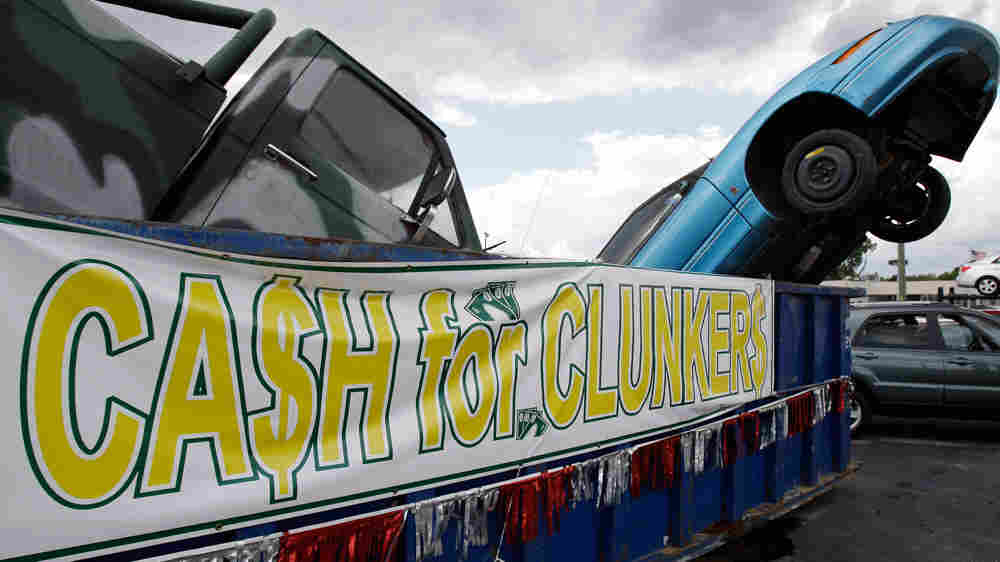 The $3 billion "Cash for Clunkers" program ends Monday night with many dealers worried about getting repaid by the federal government. Darron Cummings/AP Photo hide caption 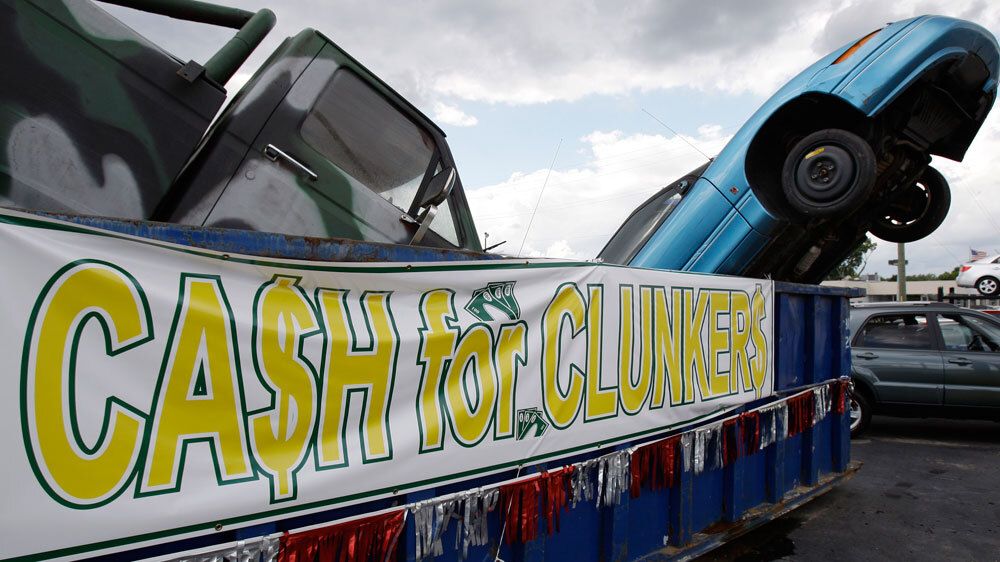 The $3 billion "Cash for Clunkers" program ends Monday night with many dealers worried about getting repaid by the federal government.

The federal government's "Cash for Clunkers" program is scheduled to end at 8 pm ET today after burning through the $3 billion Congress allocated to it.

The program, with its taxpayer funded rebates of $3,500 to $4,500 depending on which gas guzzler a customer turned in, has been hailed by the Obama Administration and many in Congress as a great success. Critics, however, have slammed it on both economic and environmental grounds.

NPR's Allison Steele was out at car dealerships in Northern Virginia over the weekend and found what was definitely a mixed picture.

For instance, there were customers who clearly wanted to take advantage of the rebates in the 11th hour. But pickings were slim. And while dealership employees welcomed the added business and customer traffic the program brought, they still had complaints about its execution.

Here's an excerpt from her report:

ALLISON: Jerry Hodges is a manager at this dealer and says it has all but run out of cars.

ALLISON: Hodges says smaller, fuel-efficient cars like Corollas and Camrys sold well and that many people traded vehicles like Ford Explorers and Expeditions and Chevy trucks from the 1990s.

Mr. HODGES: Most of the trade-ins were domestics.

Mr. CHUCK MILLER: I think probably 70 percent of the business is probably done by the imports, and that bothers me to a certain degree.

ALLISON: Miller was the finance manager at Ourisman Chrysler, Jeep and Dodge. Sales here were brisk for the last several weeks, and there are only a handful of new cars left on this lot, including a burgundy convertible Sebring. But Miller thinks the program should have focused strictly on U.S. models.

Mr. MILLER: I think the whole program should have been revolving around getting what used to be the Big Three, which is now the Detroit Three, back on their feet and going in the right direction.

ALLISON: Miller is also concerned that the clunkers program may leave dealers in a bind in the slower winter months to come. The $3 billion program did help the economy, says Salima Thorpe over at the Toyota dealer, but she worries that any economic stimulation from this clunkers program is only temporary. How, she wonders, will people pay their car loans if jobs continue to vanish?

On this, the final day of the program, Sarah Webster, the Detroit Free Press' automotive editor, notes her paper's reporting that many dealers had already stopped participating in the program before the last weekend:

But as the Free Press reports, most dealerships have already stopped selling vehicles under the program to deal with all the administrative requirements of the program that dealers are calling effective but poorly executed.

This morning, Automotive News is also reporting that the program has been such a "nightmare" that half of dealers it surveyed aren't confident they will be paid what they're owed under the program.

Many dealers I talked with about the program had hundreds of thousands of receivables on their books as a result of the program.

I suspect they'll be paid eventually -- if their paperwork is in order -- as I doubt the Obama administration wants to further irritate a group of constituents as politically active and well-heeled as car dealers. But who knows? Dumber things have most certainly happened, especially in the auto industry.