The NFL has a come up with a low-tech way to deal with a high-tech problem. The problem is the high-definition scoreboard above the field at the new Dallas Cowboys Stadium that's within the proven range of footballs kicked by punters. 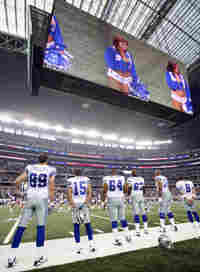 A good view of the high-definition TV screens at the new Dallas Cowboys Stadium kickers across the NFL will be aiming for. Tom Pennington/Getty Images hide caption

The solution will be familiar to every grade schooler and golfing duffer. It's called a do-over.

NPR's Wade Goodwyn reports on the decision arrived at by some of the greatest minds in professional sports:

The giant TV screens are 160 feet long and hang 90 feet above the field. Jones blamed the Titans's punter accusing him of hitting it on purpose and there was much speculation that the 10 and a half million pixel LED high def screen would have to be raised.

But today the NFL sent every team a memo announcing a do-over rule if a punt hits the screen. The clock will be reset, the down replayed and if there's any doubt about whether the ball touched the scoreboard the referees can go to the instant replay booth. If the refs didn't see it but the coach thinks he did, he can throw his instant replay flag and demand a review.

The Cowboy punter, Mat McBriar has wisely said that his punts won't be bothered by the boss' new TV.