Accessibility links
Descendants Of A Slave See The Painting He Saved : The Two-Way Descendants of Paul Jennings, who helped save a portrait of George Washington from a fire during the War of 1812, visited the White House today, to see the famous painting.

Descendants Of A Slave See The Painting He Saved

Descendants Of A Slave See The Painting He Saved 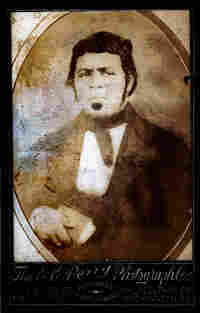 Paul Jennings, who helped save a Gilbert Stuart portrait of George Washington during the War of 1812, 195 years ago today. Courtesy of Sylvia Jennings Alexander/The Montpelier Foundation hide caption

During the War of 1812, on Aug. 24, 1814, British troops set fire to the White House. Before they did, Paul Jennings, who was born into slavery at Montpelier, James Madison's Virginia mansion, helped save a now-famous portrait of George Washington, painted by Gilbert Stuart.

As the story goes, Jennings and Dolley Madison, the president's wife, conspired to save the portrait. In his autobiography, A Colored Man's Reminiscences of James Madison, Jennings dismissed that tale. Jennings wrote that he, a French cook, and another person were asked to disassemble the portrait's frame and spirit it away.

Today, a dozen descendants of Jennings came to Washington, to visit the White House. For a few precious minutes, they were able to look at the painting their relative helped save.

This afternoon, NPR's Melissa Block spoke with Hugh Alexander, a great-great grandson of Jennings. He told her that it was "pretty amazing to see [the portrait] close up."

"I saw a number of people just stand there in silence, and keep looking," Alexander said. They also had a chance to pose for a photograph in front of the painting.

After the War of 1812, Jennings went on to buy his freedom. He reunited with his three sons, who later fought in the Civil War. Later in his life, Jennings helped to organize "The Pearl Incident," one of the largest attempted slave escapes in American history.

You can hear Block's interview with Alexander later today on All Things Considered.