Accessibility links
Thirteen-Year Old Dutch Girl's Solo Sail Around World Delayed By Dutch Court : The Two-Way A Dutch court has taken the wind out of the sails of the 13-year old girl who wants to be the youngest person to sail solo around the globe and her enabling parents. The court gave child welfare authorities temporary guardianship of Laura Dekker... 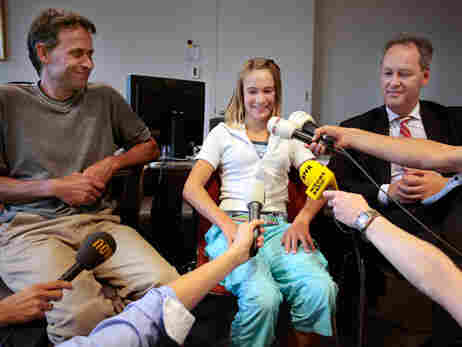 A Dutch court has taken the wind out of the sails of the 13-year old girl who wants to be the youngest person to sail solo around the globe and her enabling parents.

The court gave child welfare authorities temporary guardianship of Laura Dekker and has ordered psychologists to assess her to see if she is mentally up to circumnavigating the globe alone. That effectively delays here trip which was supposed to begin Sept. 1 by two months.

Judges said Laura Dekker would face both mental and physical risks if she were allowed to go ahead with the two-year trip in her 26-foot (8-meter) boat named Guppy.

The court said she could continue living with her father, but would become the responsibility of Dutch child care officials for two months while an independent child psychologist evaluated her case.

The court battle in this traditional seafaring nation has attracted attention around the world, raising questions about parental responsibility when children want to set off on perilous adventures.

Laura was out sailing Friday and did not attend the District Court hearing. Her father, Dick Dekker, was in court to hear the decision from the three judges, but made no immediate comment.

Richard Bakker, spokesman for the Council for Child Protection, welcomed the ruling.

"We are satisfied with this decision," he said, appealing to the father "to cooperate with the investigation and ensure Laura's safety."

The court did not remove Laura from her father's home nor did it rule out the possibility of her eventually going on the round-the-world trip. For those reasons, the family's lawyer, Peter de Lange, felt it was an acceptable ruling.

"(It supports the idea that) you are not a bad parent if you try to help your child fulfill her dream," he noted.

The court will issue a second ruling Oct. 26 on whether to extend the council's responsibility for the teenager. By that time she will have turned 14.

In case you're wondering about where the mother is, Laura's parents are divorced but her mother has reportedly given her approval for the hazardous voyage.

This case has opened a fascinating debate. On one hand, isn't a parent's role supposed to be to protect his or her children from obvious dangers as much as possible so they can reach adulthood?

But, then, isn't a parent also supposed to encourage a child's dreams and allow her to take risks in order to gain the independence to navigate adulthood with the greatest success?

There is an inherently foolishness to these Guinness World Book of Records type of adventures meant to capture a "youngest title." A 17-year old young man from Britain just became the youngest circumnavigator. If Dekker gets to do undertake her trip and isn't lost at sea along the way, she would become the youngest.

We can predict there'd be a 12-year old next and after that maybe a 10-year old. There could even be a seven year old eventually, like Jessica Dubroff, the girl who wanted to be the youngest to fly across the country and wound up dying in a plane crash with her father and flight instructor.

The natural question that arises is: where does this stop?