Accessibility links
Milwaukee Mayor Leaves Hospital After Taking Beating : The Two-Way Milwaukee Mayor Tom Barrett was released from the hospital following surgery for injuries he sustained when he was attacked by a man with a collapsible police baton after Barrett came to the defense of a grandmother during a domestic dispute. 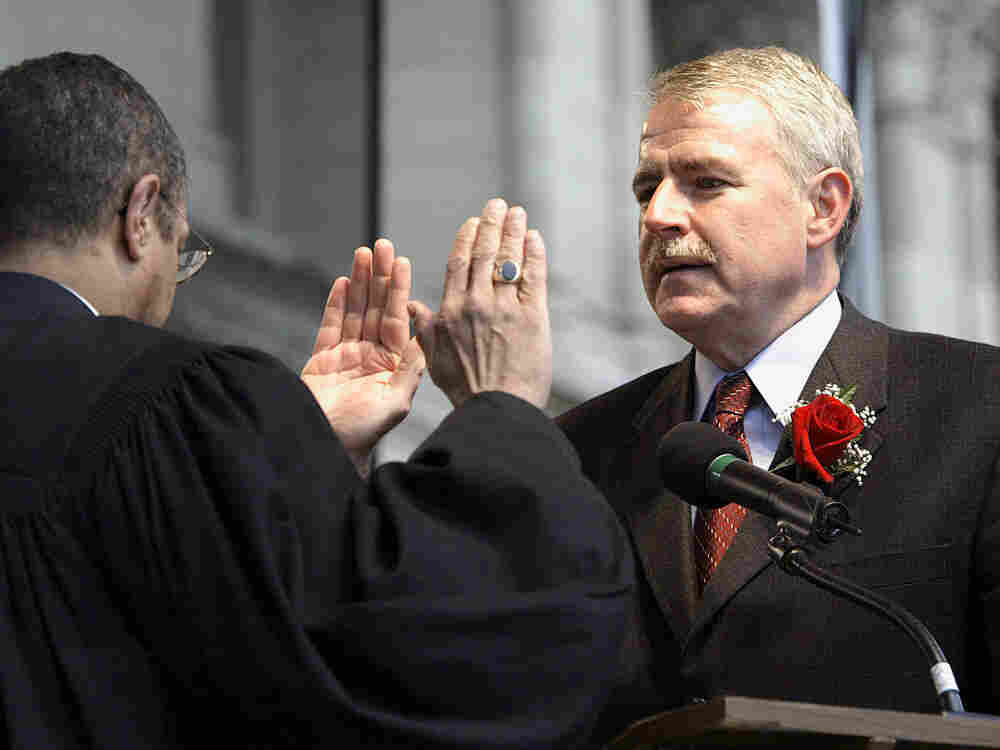 Milwaukee Mayor Tom Barrett was released from the hospital following surgery for injuries he sustained when he was attacked by a man with a collapsible police baton after Barrett came to the defense of a grandmother during a domestic dispute.

The attack on the 55-year old mayor was fairly vicious, judging by the description of his injuries described by his brother John as reported in the Milwaukee Journal Sentinel.

Earlier Monday, Barrett's brother, John, said the mayor was hit so hard in the face that the blow knocked out a bottom tooth and some top teeth.

Barrett's hand was shattered and repaired in a three-hour surgery. A doctor placed stitches in the mayor's head, and he had plastic surgery to repair another cut that extended from his cheek to his nose.

John Barrett said the assailant threatened to use a gun during the altercation Saturday night and then punched the 55-year-old mayor so hard in the stomach that he buckled.

The man then told Barrett to lie face down on the ground.

"This is when Tom thinks 'Yikes, this guy could kill me,'???" John Barrett said.

At that point the mayor came up swinging and the assailant, Anthony J. Peters, opened up an extendable, police-style baton and started beating him, John Barrett said.

Anthony J. Peters, 20, was arrested for the assault. Charges have yet to be filed.

Mayor Tom Barrett and his family were walking to their car Saturday night after an evening at the Wisconsin State Fair.

Barrett heard a woman called out for help. Her attacker turned on the mayor, when he tried to dial 911 on his cell phone...

...Kathy Sieja is a spokesperson for Froedtert Hospital. She spoke to Barrett before he was released.

And he was doing very well. He was making jokes and his children were there visiting and he said that he was forward very much to going home, getting some rest, and spending some time with his family...

Fortunately for Barrett, his injuries weren't more serious. While big-city mayors are sometimes criticized for their security details, it's hard not to wish that Barrett had been accompanied by at least one of Milwaukee's finest Saturday night. It's an amazing thing to have a mayor suffer a beat like some regular citizen good Samaritan.

Unlike a regular citizen, however, there are always political implications for a politician when something major happens to him. According to the Journal Sentinel Barrett, a Democrat, has been mentioned as a possible Wisconsin governor. Gov. Jim Doyle, Wisconsin's governor, said today he wouldn't seek a third term.

Barrett's heroics are the kind of actions that could help him if he decides to run. As will his sense of humor. He's apparently known for his wise cracks and kept it up through his pain.

More from the Journal Sentinel:

The mayor joked with Doyle that he was sorry for knocking the news of Doyle's plans off the front page of the newspapers, his brother said.

"He can still come up with a one liner," John Barrett said.