Forty eight years ago today President Barack Obama was born, despite what the Birthers insist, in Honolulu, Hawaii. 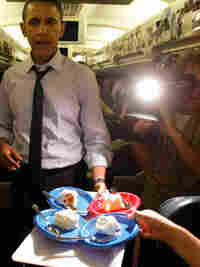 It was 1961. John F. Kennedy, still the youngest person ever elected president at age 43, was in the White House. And with African Americans unable to sit undisturbed at many downtown lunch counters in the South, the thought that a black man would be marking his birthday a few decades later while sitting at his desk in the Oval Office would have seemed like a pipe dream to most people.

But that's where we are. America is still capable of surprising itself.

Forty-eight isn't one of the big birthdays, like those divisible by 5.

So the White House isn't planning anything big. There will be no over-the-top birthday event, like "Beyonce singing Happy Birthday, Mr. President" at a packed sports arena a la Marilyn Monroe.

Instead, Robert Gibbs, the White House Press Secretary, said he would get back to journalists with details about how Obama plans to celebrate his birthday. Gibbs was able to tell us that the president will meet at the White House with the entire Senate Democratic Caucus today. Maybe they'll favor him with a chorus of "Happy Birthday."

Gibbs: ... The second announcement is the Senate Democrats will come down to the White House tomorrow and have lunch here with the President.

Q All of them?

Q But we're all invited to the lunch?

MR. GIBBS: You didn't get your invite?

Q Is beer being served? (Laughter.)

MR. GIBBS: No. No. And it's the President's birthday, and Chuck E. Cheese was booked.

MR. GIBBS: Good. That didn't actually cause you to laugh, though.

Q Spoken like the father of a six year old.

MR. GIBBS: Who celebrated their birthday a few weeks ago at? Chuck E. Cheese.

Q Is that his only celebration tomorrow?

Q You don't celebrate your birthday with the United States Senate?

MR. GIBBS: Take us away, Phil.

By the way, here's a fun little presidential birthday quiz. I missed a few chip shots and got only 72 percent right. My score should be easy to beat.