Accessibility links
Tobacco Firms Sue Over New FDA Powers : The Two-Way When President Barack Obama signed anti-tobacco legislation into law in June, giving the Food and Drug Administration for the first time the authority to regulate tobacco, experts said the law was likely to be challenged in the courts. And today i...

When President Barack Obama signed anti-tobacco legislation into law in June, giving the Food and Drug Administration for the first time the authority to regulate tobacco, experts said the law was likely to be challenged in the courts. And today it was. 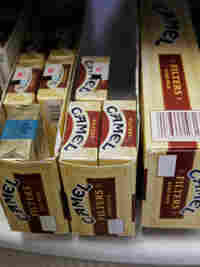 R.J. Reynolds Tobacco Co., the maker of Camels and other brands, is one of the plaintiffs in the lawsuit alleging that the new federal anti-tobacco laws violate the companies' First Amendment rights . Paul Sakuma/AP Photo hide caption

Tobacco makers sued the federal government Monday, saying the law violated their First Amendment rights to communicate with their customers.

R.J. Reynolds Tobacco Co. was one of several manufacturers that joined a retailer in filing the lawsuit.

In a press release, the company said:

"This suit does not challenge Congress' decision to give the FDA regulatory authority over tobacco products, nor does it challenge the vast majority of the provisions of the new law," said Martin L. Holton III, senior vice president and general counsel for R.J. Reynolds. "However, the law contains provisions that severely restrict the few remaining channels we have to communicate with adult tobacco consumers and, in our opinion, cannot be justified on any basis consistent with the demands of the First Amendment."

Holton adds, "The law also contains provisions that chill our ability to participate in the broader public policy dialogue over the future of tobacco products in this country. Reynolds believes that governments, public health officials, tobacco manufacturers and others can and should play a role in providing adult tobacco consumers with accurate information about the various health risks and comparative risks associated with the use of different tobacco and nicotine products. This suit seeks to confirm that Reynolds' ability to participate in that important dialogue has not been shut down."

The tobacco industry is clearly hoping its arguments are embraced by federal courts which in recent decades have trended towards granting more protection under the First Amendment to commercial speech.

In Lorillard Tobacco Co v. Reilly, the Supreme Court in 2002 ruled as unconstitutional a Massachusetts ban on outdoor tobacco advertising within 1,000 feet of a school or playground and on point-of-sale advertising lower than five feet from the ground.

The ban was meant to keep protect children from advertising but the high court found that it was too broad.

"A speech regulation cannot unduly impinge on the speaker's ability to propose a commercial transaction and the adult listener's opportunity to obtain information about products."

With the Supreme Court lineup still appearing to favor a five to four conservative majority in such commercial-speech cases, the tobacco industry is clearly looking for another First Amendment victory similar to what it achieved in the Lorillard case.