Accessibility links
U.S. In Afghanistan Faces Endgame Challenges Similar To Those Soviets Saw : The Two-Way As President Barack Obama and his national security team met Wednesday to strategize about the way forward in Afghanistan, they have no shortage of advice on what the next steps should be. 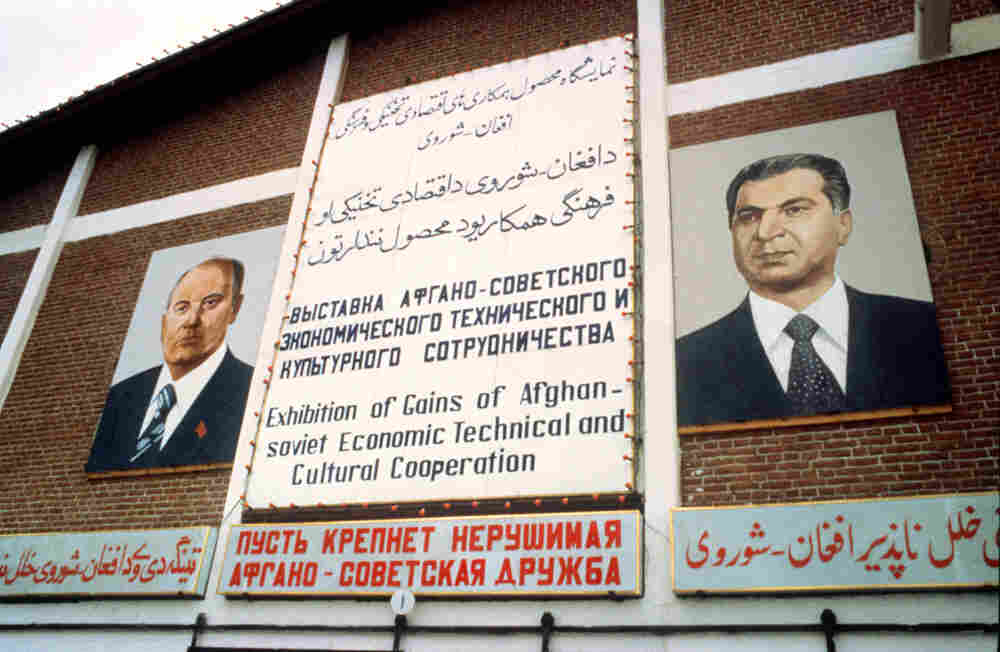 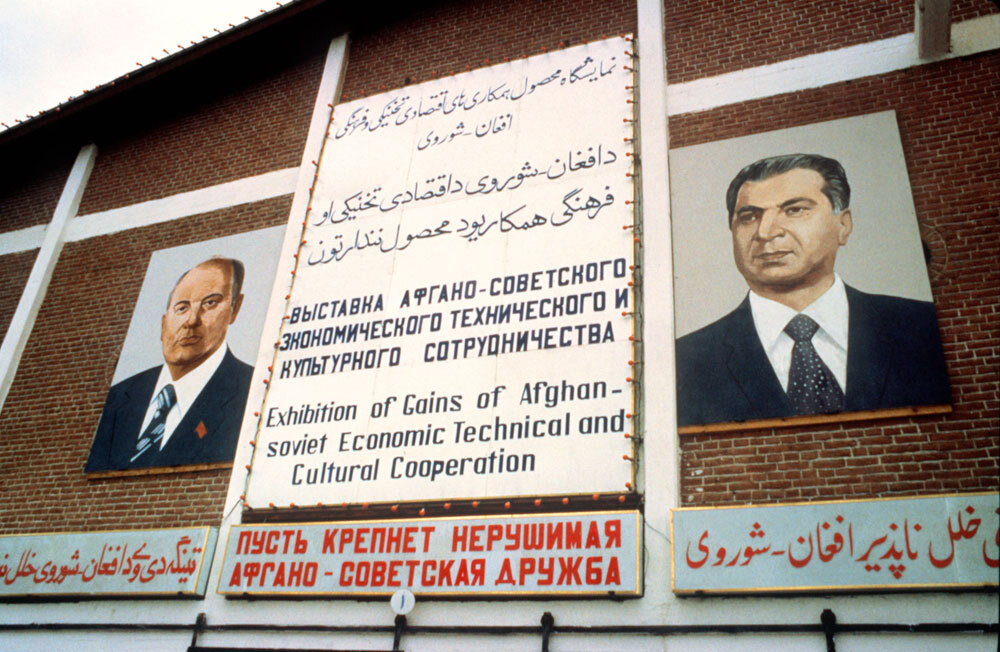 This picture from the early 1980s in Kabul shows Afghan leader Babrak Karmal and his Soviet patron Mikhail Gorbachev. The sign in red reads: 'Strong be the unshakable Afghan-Soviet friendship.'

As President Barack Obama and his national security team met Wednesday to strategize about the way forward in Afghanistan, they have no shortage of advice on what the next steps should be.

Steve Coll who writes on intelligence and national security issues for the New Yorker and once the Washington Post's managing editor, has weighed in with his own suggestion: that the Americans might want to review what then Soviet Union leader Mikhail Gorbachev did in the 1980s to end his nation's involvement in Afghanistan.

Coll observes that Gorbachev "Afghan-ized" the war by turning it over to Afghan security forces in the same way Americans are trying now.

But Gorbachev actually had a bigger idea which, according to Coll, was to get the U.S.'s help to stabilize the region.

Unfortunately, the U.S. decided to stick with its strategy at the time of using the Islamic mujaheddin to bring continued instability to Afghanistan. Some elements among those same fighters went on to become Al-Qaida.

Gorbachev had a broader vision for his exit strategy than merely propping up Najibullah to conduct tribal negotiations, however. He believed that the Soviet Union and the United States, having effectively concluded their debilitating and devastating proxy war in Afghanistan, now had a shared interest in promoting stability in South and Central Asia. Gorbachev advocated U.N.-brokered regional negotiations aimed at stabilizing Afghanistan and isolating Islamist extremists. This in turn would create stability along the southern rim of the Soviet Union, where Muslim populations resided. Surely, Gorbachev argued, the United States did not wish to see anti-American Islamic extremists come to power in Kabul, at least not without the ameliorating effect of coalition arrangements and power-sharing with Najibullah? Didn't the United States want moderates to prevail in Pakistan, next door, where a fragile constitutional democracy had only recently been restored?

The U.N. attempted, with ambivalent U.S. involvement, to pursue this vision of regional diplomacy and stabilization, through negotiations between 1988 and 1992 that included Najibullah and other Afghan leaders. It failed, however, in part because the United States, until the end of 1991, continued to fund and support a "military solution" for the mujaheddin favored by Pakistan's army and intelligence service. The C.I.A. argued in favor of the military solution. It then concluded, as one assault after another on Najibullah-defended cities failed, that the U.S. had no further interests in the country and should pack up its financing and diplomacy and go home. A few years later, the Taliban took Kabul. One of the American policymakers responsible for this sequence of policy decisions--who was deeply skeptical of Gorbachev during the late nineteen-eighties and who was present at the decision to abandon the difficult work of regional diplomacy in 1991-1992 that Gorbachev favored--was Robert Gates, who is now Secretary of Defense. By all accounts, Gates has been a successful, pragmatic, and reliable adviser to both Bush and Obama in his current role. He certainly has been open and contrite in public remarks about the lessons that United States learned on September 11th, an event rooted (but only in part) in the U.S. decision to abandon Afghanistan to extremism and chronic instability a decade before. Gates will be in the room when Obama makes America's next fateful decisions about Afghan policy.

Coll ends the piece with this line:

Gorbachev may have well been right. But another conclusion to draw from Coll's observations is just how easy it would be for forces in the region inimical to U.S. interests to make Afghanistan as painful a project as possible, disrupting U.S. plans for stability in much the way the U.S. thwarted the Soviet Union.

The Iranian government and certain elements within Pakistan's intelligence services are just two potential sources of potential stability that come to mind.

In any event, it is richly ironic that Defense Secretary Gates, who as the CIA head in the early 1990s did what he could to make life difficult for the Soviets in Afghanistan, now finds himself and the troops he oversees, facing a situation analogous to the Soviets in the very same Afghanistan.