Erich Kunzel, the founder and conductor emeritus of the Cincinnati Pops Orchestra, has died. He was 74. 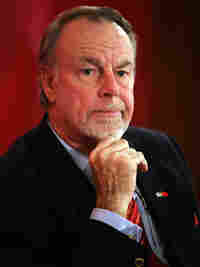 Kunzel was seen by millions of Americans in recent years conducting patriotic songs on the live July 4 broadcasts from the National Mall. And his Cincinnati Pops Orchestra was truly popular, selling 10 million recordings.

An excerpt from a statement from the orchestra's website:

CINCINNATI -- The Cincinnati Pops Orchestra is deeply saddened to announce that conductor Erich Kunzel died this morning after a four-month battle with cancer of the pancreas, liver and colon. The seventy-four year old conductor of the Cincinnati Pops had been in Maine receiving treatment. He led the orchestra is his final performance in Cincinnati on August 1. Maestro Kunzel is survived by his wife Brunhilde.

"The world has lost a musical giant and we have lost a dear friend," said Cincinnati Symphony Orchestra President Trey Devey. "Erich Kunzel built the Cincinnati Pops into one of the best known orchestras in the world and is not only beloved in Cincinnati, but around the globe. Today we honor his tremendous legacy and offer our deepest sympathies to Brunhilde and their entire family."

The Cincinnati Symphony Orchestra Board of Directors met in a special session this morning and unanimously conferred upon Maestro Kunzel the title of Founder and Conductor Emeritus, honoring his 44 years of exemplary artistic leadership that brought worldwide acclaim to the Orchestra and the region.

The Cincinnati Pops has launched a special memorial webpage where the public is encouraged to view photos from Maestro Kunzel's celebrated career, as well as post tributes and remembrances. The link can be found at www.cincinnatipops.org. The Pops is also accepting cards and notes for Mr. Kunzel's family at the organization's Music Hall office located at 1241 Elm Street in Cincinnati, Ohio, 45202.