Accessibility links
Obama To Push Health Care In Sept. 9 Congressional Joint Session : The Two-Way President Barack Obama plans to speak to Congress and the nation during a joint session of Congress next Wednesday, Sept. 9. in an attempt to regain some traction for his major domestic agenda item, health-care overhaul.

President Barack Obama plans to speak to Congress and the nation during a joint session of Congress next Wednesday, Sept. 9 in an attempt to regain some traction for his major domestic agenda item, health-care overhaul. 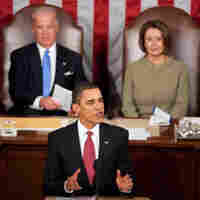 It's an obvious response to the beating he's taken on health care reform during the congressional recess with recent surveys showing more respondents questioning the president's leadership as well as Democratic health-care overhaul proposals. And then there were all those spirited town-hall meetings that dominated the news.

The president has been getting a lot of unsolicited advice recently, including from former Senate majority leader and 1996 Republican presidential nominee Bob Dole to seize the reins of leadership on the issue and let the nation and Congress know exactly what he wants to see in the relevant legislation.

If I were a White House adviser, I would suggest that the day Congress reconvenes, President Obama's version of reform should be introduced by Democratic leaders in the House and Senate. Health-care reform is the vital issue of our time, and Obama should be out front with his specific plan on this make-or-break issue.

Many of us were taught that the president proposes and Congress disposes. Today, Congress is doing both -- with the president relegated to the role of cheerleader in chief as he campaigns for various House committees' efforts. Certainly, Obama supports much in these proposals -- but Barack Obama is our president, not a commentator.

Obama's approval numbers would jump 10 points if Americans knew he was fully in charge. A tactical move of introducing his own plan would also stir more Republicans to become active for reform in critical areas. Right now the president's biggest problem is with congressional Democrats, who are split and searching for a way out of the medical wilderness.

White House reporters are all working right now on getting details on what the president will say which will be difficult since the White House probably doesn't know exactly what it plans to say.

It's an attempt to rev-up negotiations after they appeared to be stalling. A handful of Senators are still reaching for a bipartisan bill but Democratic leaders are getting antsy. Mr. Obama has giving the Senators until September 15th to bring forward a bill.

Ken Rudin, who writes NPR's Political Junkie blog, has noted to his colleagues here that it was September 1993 when Bill Clinton gave a speech about his health-care bill to a joint session of Congress. That was 14 years ago this month.

That speech was memorable for at least two reasons. The wrong text was on the TeleprompTer, forcing Clinton to deliver it from memory and adding to the awe many had for his legendary mental abilities. The other reason was he held up a mock-up of what he called a "health-care security card" every American was supposed to get. We didn't, of course. Which is why Obama will be making his speech next Wednesday.