Accessibility links
Photo Of Marine's Fatal Wounding Sparks Debate : The Two-Way When Marine Lance Cpl Joshua M. Bernard, 21, was mortally wounded on Aug. 14, 2009 in Afghanistan by a Taliban fighter's rocket-propelled grenade, the aftermath was captured by Associated Press Julie Jacobson who was embedded with the unit. The ...

When Marine Lance Cpl Joshua M. Bernard, 21, was mortally wounded on Aug. 14, 2009 in Afghanistan by a Taliban fighter's rocket-propelled grenade, the aftermath was captured by Associated Press Julie Jacobson who was embedded with the unit. 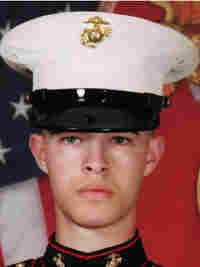 The photo is a rarity, a picture of a fatally injured American fighting man in Afghanistan or Iraq and so it's news worthy for that reason alone.

But the same thing that makes the photo news, also makes it extremely troubling for many people to view. It is difficult to witness the moments when a young service member's life is ebbing away.

For that reason, AP didn't release the photo as early as it could have. In an article published Friday, the news service explains that it waited until after the funeral of the Maine native due to the photo's sensitivity.

The AP waited until after Bernard's burial in Madison, Maine, on Aug. 24 to distribute its story and the pictures. An AP reporter met with his parents, allowing them to see the images.

Bernard's father after seeing the image of his mortally wounded son said he opposed its publication, saying it was disrespectful to his son's memory. John Bernard reiterated his viewpoint in a telephone call to the AP on Wednesday.

"We understand Mr. Bernard's anguish. We believe this image is part of the history of this war. The story and photos are in themselves a respectful treatment and recognition of sacrifice," said AP senior managing editor John Daniszewski.

The requests for the AP to not run the photo or make it widely available didn't stop with the Marine's father. AP received a high-level request from the Obama Administration. Another AP excerpt:

The photo was in a package that the AP sent to its newspaper, broadcast and online subscribers Thursday morning with an "embargo," or scheduled release time, of 12:01 a.m. Friday, Sept. 4. That scheduled release time meant the stories and photos were in the hands of thousands of editors by Thursday morning, giving them the day to make their own decisions about publishing the battlefield photo.

Thursday afternoon, Secretary of Defense Robert Gates called AP President Tom Curley asking that the news organization respect the wishes of Bernard's father and not publish the photo. Curley and AP Executive Editor Kathleen Carroll said they understood this was a painful issue for Bernard's family and that they were sure that factor was being considered by the editors deciding whether or not to publish the photo, just as it had been for the AP editors who decided to distribute it.

At NPR.org, we decided to use the photo but to place it behind a warning screen alerting readers that it is graphic and that some might find it objectionable.

We think it's important for news organizations to show the reality of wars and the true nature of the sacrifices some Americans are making. Our mission is to chronicle our times honestly. It's a role that doesn't always make us happy or comfortable. This photo is proof of that.

Still, there was even debate within NPR about the photo. One journalist, for instance, questioned why the father's wishes weren't respected by AP.

This debate isn't new. There was something like it during World War II. As Richard Lacayo pointed out earlier this year on Time.com's Looking Around blog:

By the beginning of World War II, when inexpensive photo magazines meant that pictures were getting into a lot more homes, the Roosevelt administration was censoring all photos of war dead. Life magazine pushed to have the White House reverse its policies and by 1943 they did. Life published one of the first, a photo of three dead G.I.'s on a beach in New Guinea, though two of the corpses were face down and the third was in a position that hid his face. The magazine ran a text with that picture that I think made exactly the right point. "Why print these pictures? Is it to hurt people? To be morbid?" Then it came to its own conclusion. "The reason is that words are never enough."

In any event, to gain context for this photo, I recommend also reading the account by photographer Julie Jacobson, about the incident that claimed Cpl. Bernard's young life and the bravery of his fellow Marines who placed themselves at great risk to get him to medevac'ed off the battlefield.