Accessibility links
Obama 'Hope' Poster Creator Not Credible: AP : The Two-Way This from the Oh-What-A-Tangled-Web-We-Weave department. The Associated Press claims in legal documents filed Tuesday that it doesn't believe the revised version of events told by Shepard Fairey, the artist who took an AP photo and transformed i...

This from the Oh-What-A-Tangled-Web-We-Weave department.

The Associated Press claims in legal documents filed Tuesday that it doesn't believe the revised version of events told by Shepard Fairey, the artist who took an AP photo and transformed it into the iconic "Hope" poster. 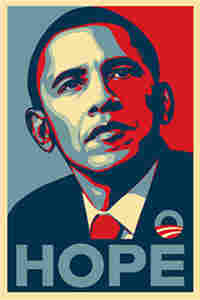 The Associated Press doesn't buy the changing story of Obama "Hope" poster creator Shepard Fairey about his confusion over the source photo for the artwork. hide caption

Fairey admitted last week that he used the photo the AP said he used all along, a solo shot of Obama from a 2007 Darfur news conference where Obama was accompanied by actor George Clooney.

Incidentally, I attended the news event in question at the National Press Club in Washington, D.C. The poster is about the only substantive thing that came out of that press conference.

In any event, Fairey had previously said he used a photo of both Obama and Clooney which he cropped Clooney from.

But in his on-line confession last week he acknowledged that he had learned early in the case that the AP was right. He stuck with his story however, even destroying computer files that would have been evidence against him.

The AP's position is that Fairey knew from the very beginning that he used the photo the news agency said he used.

From an AP story on AP's legal filing:

Days after Fairey acknowledged trying to destroy potentially damaging evidence in his legal battle with the AP, the news organization filed amended papers in Manhattan federal court on Tuesday accusing the poster artist of deliberate deception. Until recently, Fairey had claimed his image was based on a 2006 photo of then-Sen. Barack Obama, seated next to actor George Clooney. Fairey now says he used a solo, close-up shot of Obama, as the AP had long alleged.

"It is simply not credible that Fairey somehow forgot in January 2009 which source image he used to create the Infringing Works, which were completed only a year earlier in January 2008," according to the papers filed Tuesday.

"It also strains credulity that an experienced graphic designer such as Shepard Fairey misremembered cropping George Clooney out of a source image and making other changes ... when no such cropping or other changes were ever made."

The reason it matters which photo Fairey used is because the fair-use copyright laws would allow an artist to use a news photo so long as the image was substantially changed. Cropping a photo would be a more significant change than taking a photo and painting it red, white and blue which is essentially what AP accuses of Fairey of.