Listen
Don Voegeli, Composer Of The 'All Things Considered' Theme, Has Died

Don Voegeli, Composer Of The 'All Things Considered' Theme, Has Died 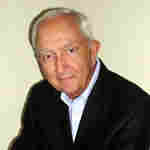 There's sad news to pass along.

Don Voegeli, composer of the themes that All Things Considered listeners have heard since the show debuted in 1971, has died. He was 89, according to an obituary posted online at Madison.com.

As NPR's Bob Boilen reported on ATC's 31st anniversary, Voegeli taught in the music department at the University of Wisconsin and at the birth of NPR was asked to come up with a theme for a national daily news program.

His first version, as you can hear here, isn't what current listeners are used to. Voegeli came up with something that will sound more familiar in 1974. The theme has gone through three more updates since.