Accessibility links
Jimmy Carter Apologizes For Criticizing Israel : The Two-Way Former President Jimmy Carter apologized this week for criticizing Israel for its treatment of Palestinians in his writings and comments, statements like calling the Jewish nation an "apartheid" state which, he suggests, may have stigmatized it. ... 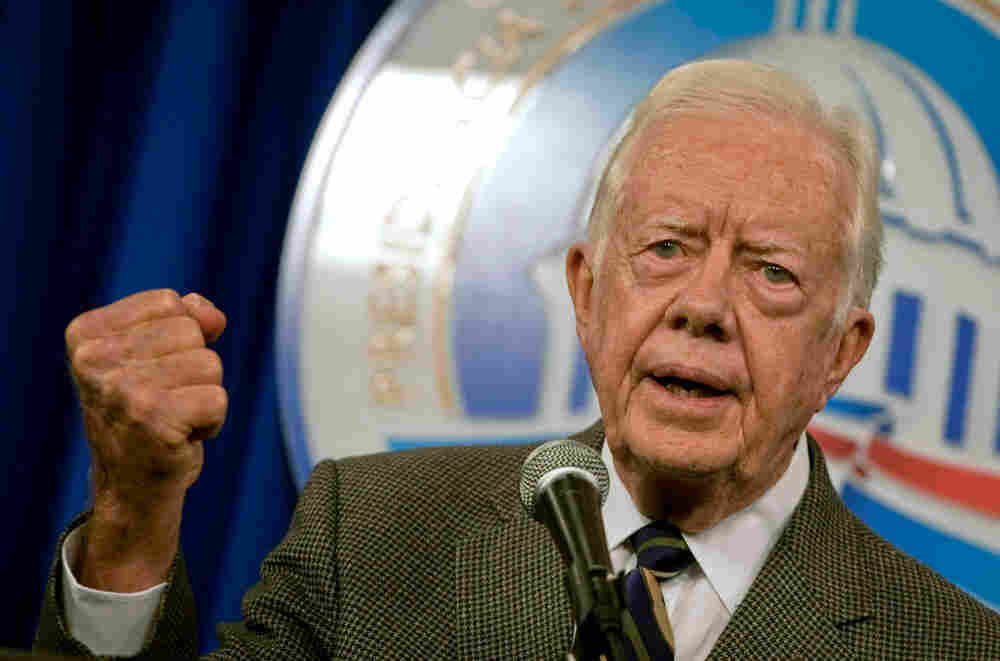 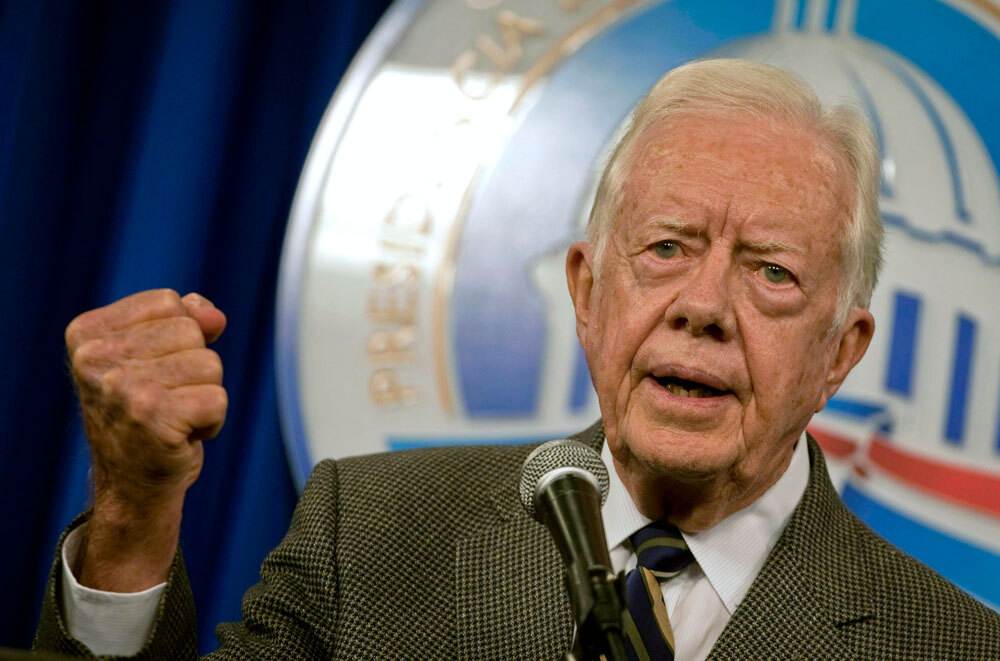 Former President Jimmy Carter apologized this week for criticizing Israel for its treatment of Palestinians in his writings and comments, statements like calling the Jewish nation an "apartheid" state which, he suggests, may have stigmatized it.

Carter's Al Het, which means "for the sin" in Hebrew, actually came earlier in the week when Carter issued it to the Jewish Telegraphic Agency. But it really started to go viral Wednesday.

An open letter to the Jewish community at the season of Chanukah from former President Jimmy Carter:

The time of Chanukah and the Christian holidays presents an occasion for reflection on the past and for looking to the future. In that vein, I wish to share some thoughts with you about the State of Israel and the Middle East.

I have the hope and a prayer that the State of Israel will flourish as a Jewish state within secure and recognized borders in peaceful co-existence with its neighbors and with all the Moslem States, and that this peaceful co-existence will bring security, prosperity and happiness to the people of Israel and to the people of the Middle East of all faiths.

I have the hope and a prayer that the bloodshed and hatred will change to mutual respect and cooperation, fulfilling the prophetic aspiration that the lion shall lie down with the lamb in harmony and peace. I likewise hope that violent attacks against all civilians will end, which will help set a better framework for commencing negotiations. I further hope that peace negotiations can soon commence, with all issues on the negotiating table.

I have the hope and a prayer that just as Chanukah is the Festival of Lights, the State of Israel will fulfill its destiny as a light unto the nations.

We must recognize Israel's achievements under difficult circumstances, even as we strive in a positive way to help Israel continue to improve its relations with its Arab populations, but we must not permit criticisms for improvement to stigmatize Israel. As I would have noted at Rosh Hashanah and Yom Kippur, but which is appropriate at any time of the year, I offer an Al Het for any words or deeds of mine that may have done so.

May we work and pray for that better day.

Carter's apology met with some skepticism. Did it have anything to do with his grandson running for a Georgia state senate seat? Carter said no.

JTA has a piece in which the two Carters seek to put to rest the idea of a link between the apology and the Senate race:

The seat, which is university heavy -- Emory, among others, is situated there -- also has a substantial Jewish community.

The senior Carter outraged Jewish leaders with his book "Palestine: Peace not Apartheid," and they strongly criticized the former U.S. president for what appeared to be his likening of Israel's settlement practices to apartheid and seeming to place the brunt of the blame for a lack of peace on Israel.

On the subsequent book tour, Carter further enraged many Jews by intimating that the pro-Israel lobby inhibited an evenhanded U.S. policy.

Such bad blood could potentially translate into problems for Carter's grandson as he considers launching a political career.

But in an interview with JTA, Carter insisted that ethnic electoral considerations were not reason enough to reach out to the Jewish community, although he did not outright deny that it was a factor.

"Jason has a district, the number of Jewish voters in it is only 2 percent," he said, chuckling.

"While I was very happy to see my grandfather's letter, it was completely unrelated to my campaign. The letter is a product of discussions with some of his friends in the Jewish community that have been going on for a long time. I, like many others, see this as a great step towards reconciliation," Jason Carter said in the statement. "As for my campaign, I intend to reach out to all people in District 42 and work hard to earn their trust and their votes. Ultimately, this campaign will focus on the people of this district and the issues that a good advocate in the Georgia State Senate can affect, including fixing a broken transportation system, getting the economy moving again, and providing a first-class education to our kids."