Accessibility links
Speaker Nancy Pelosi's Public-Option Stance Softens : The Two-Way House Speaker Rep. Nancy Pelosi has sounded pretty adamant in the past about the need for any health-care overhaul legislation to have a public option if it's to get through her chamber. But on Thursday, she appeared to be in a somewhat more flexi... 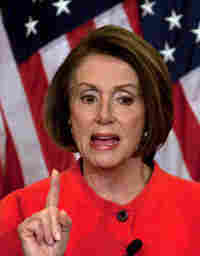 House Speaker Rep. Nancy Pelosi has sounded pretty adamant in the past about the need for any health-care overhaul legislation to have a public option if it's to get through her chamber.

But on Thursday, she seemed in a somewhat more flexible frame of mind. Here's an exchange she had with a reporter:

REPORTER: As you well know, the Democrats in the Senate have come to a tentative deal to drop what everybody knows is as public option from their health care bill. You have said there is, quote, "no way I can pass the bill in the House of Representatives without a public option. Is that still the case?"

SPEAKER PELOSI: Well, what I have said was a two-part statement, which really quotes what the president has said. We believe, we in the House believe that the public option was the best way to keep insurance companies honest, to keep them honest and also to increasecompetition. If you have a better way, put it on the table.

In other words, Pelosi didn't say "yes, a public option is non-negotiable." Instead she left herself more wriggle room than she has in the past. She continued:

PELOSI: As soon as we see something in writing from the Senate, we'll be able to make a judgment about that. But our standards are that we have affordability for the middle class, security for our seniors, closing the doughnut hole and sustaining the solvency of Medicare, responsibility to our children, so we're not one dime added to the deficit. And accountability of insurance companies, measures -- we'll take a measure of that bill in those regards.

REPORTER: So what you know with the Senate is doing, do you think that that will fill those? There have been some pretty positive statements from some of the most liberal members of the caucus.

SPEAKER PELOSI: What I have said is as I always say to my members, give the Senate room. I say that about the president, give the president room, give the Senate room and let us see what it is. But we honestly have not -- have no paper on this and probably we will
know a great deal more when the paper comes back from the Congressional Budget Office. But seeing their bill and our bill, I know one thing for sure; we'll have a great bill.