Accessibility links
The Decade Doesn't Rate Too High; There's Still Time To Add Your Thoughts : The Two-Way Two-Way readers don't think too highly of the decade.

The Decade Doesn't Rate Too High; There's Still Time To Add Your Thoughts

The Decade Doesn't Rate Too High; There's Still Time To Add Your Thoughts

Our "rate the decade" question is still open. But unless there's a sudden groundswell of votes from folks who think the last 10 years were pretty good, the "aughts" aren't going to come away with a very good score from Two-Way readers 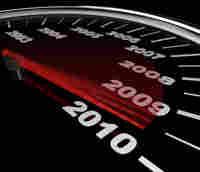 Commenter Evan Demere (edemere) summed up how many folks seem to feel:

This decade was like a bad hangover after a wild party. And not unlike a hangover, there are still consequences waiting to be dealt with even after the head has cleared.

As planned, the question will stay open until 11:59 p.m. ET tonight. So here's the box, again, if you want to weigh in:

You can also join the discussion at our earlier post about whether this really is the end of the decade or not.