Three large explosions in Baghdad this morning have killed more than 30, police tell the Associated Press and Reuters. Scores more were wounded.

The AP adds that the blasts happened around 3:40 p.m. local time in a "popular hotel and restaurant district along the Tigris River."

NPR's Lourdes Garcia-Navarro, who is in Baghdad, is calling the newsroom now with more on the story. We'll update this post with her reporting as soon as possible. Click your "refresh" button to make sure you're seeing our latest updates.

Update at 2:10 p.m. ET. From Baghdad, NPR's Quil Lawrence wraps up the story:

Update at 1 p.m. ET: The Washington Post says that three of its Iraqi employees are among the injured. "All three are conscious, and the injuries do not appear life-threatening," the Post says.

The Post's bureau is located in a house on the Hamra property. The windows of the house were shattered in the blast, and much of the bureau is in tatters. Three Post employees were wounded by flying glass. Two of them sustained head injuries, and a third has broken ribs and a broken arm. All three are conscious, and the injuries do not appear life-threatening.

The blast also damaged NPR's Baghdad bureau, which is near the al-Hamra, but no one was injured.

Update at 10:35 a.m. ET: As we reported here, the notorious "Chemical Ali" -- a cousin of Saddam Hussein who was sentenced to death four times and was found guilty of ordering the deaths of thousands of Kurds in 1988 -- was hanged today.

The AP now says that:

Government spokesman Ali al-Dabbagh said the latest bombings "represent an extension" of the activities of insurgents linked to Saddam's regime. But he stopped short of declaring the blast as possible revenge for the execution.

Update at 9:16 a.m. ET. Latest death toll estimates: Reuters now says it's been told by police that at least 36 people were killed and at least 71 wounded. The AP says its sources estimate there were at least 31 fatalities and more than 80 people wounded. We've updated above as well.

Update at 9:12 a.m. ET. Here's a photo from the scene of one explosion. The AP says it shows police assisting a victim: 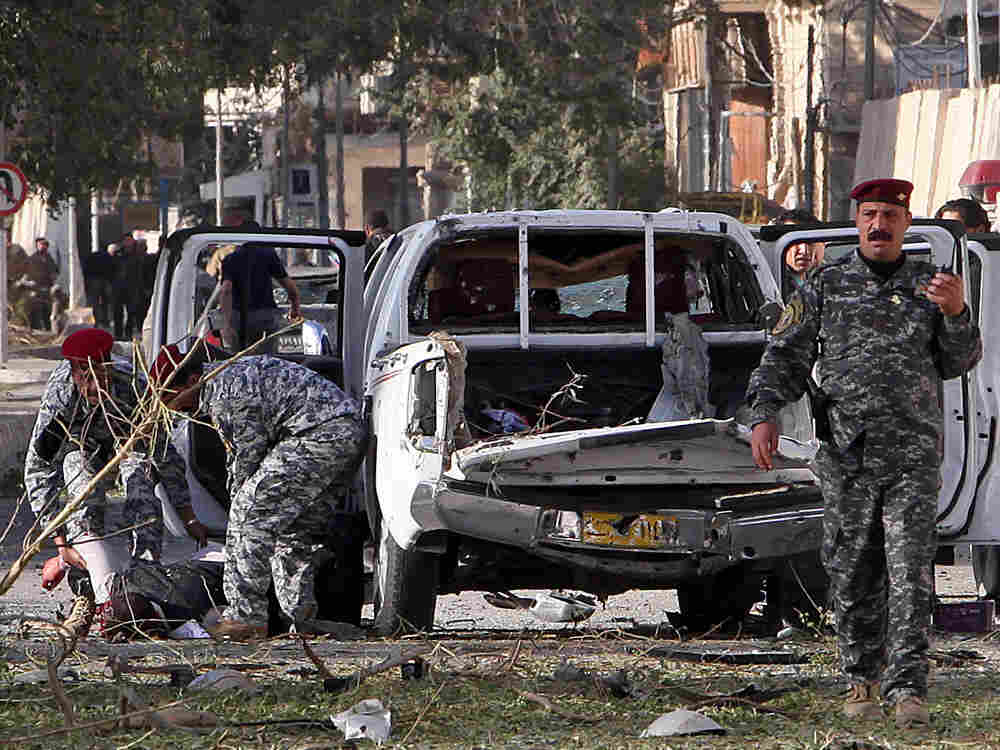 Update at 9:08 a.m. ET. Here's more reporting from the scene by Lourdes. She says police are confident the attacks were coordinated and notes that one of the hotels has been targeted several times:

Update at 8:50 a.m. ET: The death toll keeps rising. Reuters reports police say at least 24 people were killed. The AP is reporting that at least 31 have died. We have updated above as well.

Update at 8:47 a.m. ET: The AP now reports the death toll is "at least 16" and says that "scores" have been wounded. Earlier, police had said there were at least 11 fatalities. We've updated above with the higher number.

Update at 8:40 a.m. ET. AFP/Getty Images has just distributed this photo of smoke rising from the scene of one explosion: 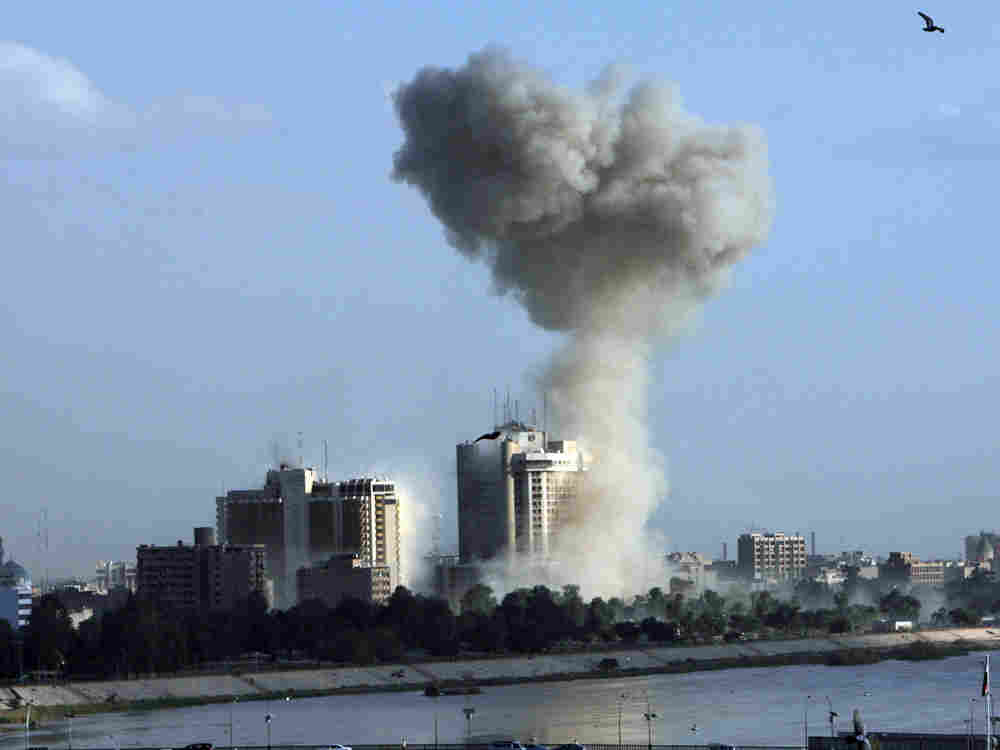 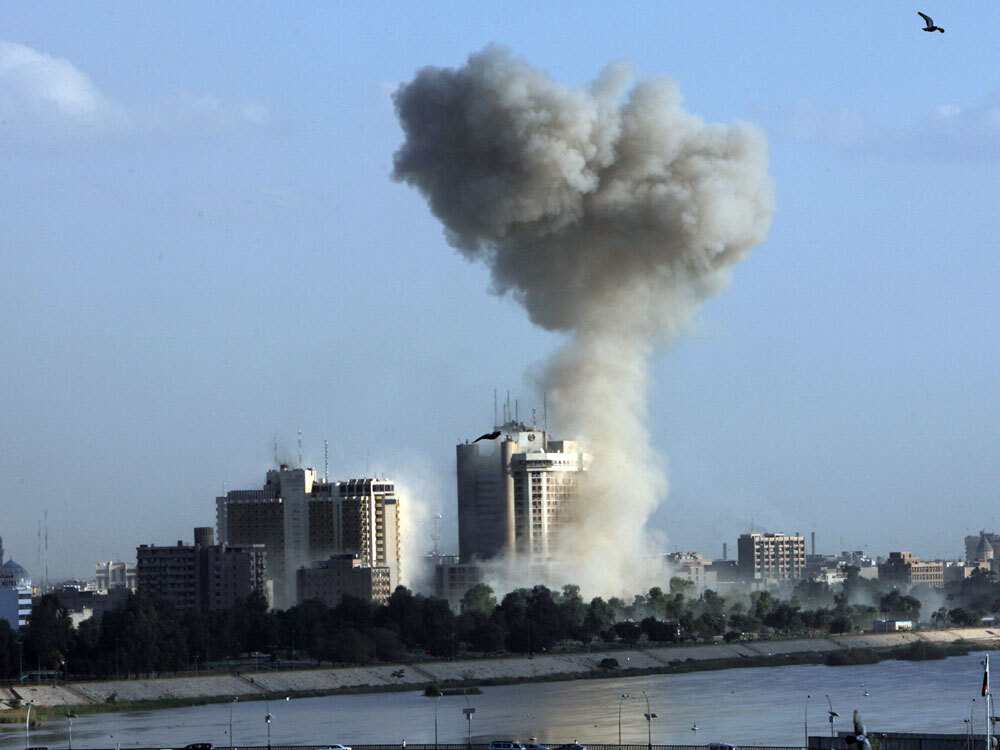 Update at 8:31 a.m. ET. Here's a recording from Lourdes' call to the newsroom. She was speaking with the Newscast desk from the scene of one explosion. She said the attack there appears to have been aimed at least in part at the foreign community:

-- "There were a series of explosions ... three bombs that targeted three different hotels." At one, a minibus exploded. The bomb destroyed a row of houses and a family may be trapped inside at least one.

-- "The fact that there were three explosions ... shows this was a coordinated attack, at least that's what the police are telling us."

-- "From what I heard ... (there were) three different explosions and a lot of firefights."

-- "It's pretty chaotic ... There's mangled cars and frankly, bits of bodies littered around the area."