Accessibility links
Abstinence-Only Education Works According To New Study : The Two-Way A new study indicates that abstinence-only education works even when it doesn't have a moral component.

Abstinence-only education has been a frequent point of contention between conservatives and liberals. 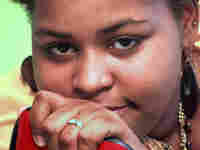 Abstinence-only programs can be effective according to a new study whose findings run counter to past research. A young woman wears an abstinence promise ring after completing a 2008 program called Camp Diva. Penelope M. Carrington/AP Photo/Richmond Times-Dispatch hide caption

Conservatives, particularly religious ones, have argued that young people need to be taught the moral dimension of sexual activity as part of abstinence education and urged to avoid sex until marriage.

For those reasons, liberals and many health and education professionals have argued against abstinence-only education. Many of them have preferred comprehensive sex education.

Now a new study indicates that abstinence-only education works even when it doesn't have a moral component.

The study done by researchers at the University of Pennsylvania and the University of Waterloo in Canada, as well as the Ontario Institute for Cancer Research, also in Canada, found that abstinence education given to 662 African American 6th and 7th graders significantly reduced sexual activity.

As NPR's Brenda Wilson reported for the network's newscast:

The researchers developed a curriculum that was designed to get middle schoolers in the 6th and 7th grades to put off having sex until they were more more mature and could handle the consequences.

There were no lectures. It was an interactive program. The young people had discussions about resisting peer pressure, through role playing and games.

Unlike previous programs it did not define abstinence as delaying sex until marriage.

Two years after completing the program, a survey showed that the abstinence training was effective in getting 67% of the kids to delay having sex. That's compared to 48% of students in another group who only received basic health information.

Other studies have shown that abstinence only programs are not effective.