Accessibility links
'Miss Me Yet?' Billboard With Photo Of Bush Is Real; Not An Internet Trick : The Two-Way A billboard featuring a photo of George W. Bush and the message "miss me yet?" stands tall out side Wyoming, Minn.

'Miss Me Yet?' Billboard With Photo Of Bush Is Real; Not An Internet Trick

'Miss Me Yet?' Billboard With Photo Of Bush Is Real; Not An Internet Trick 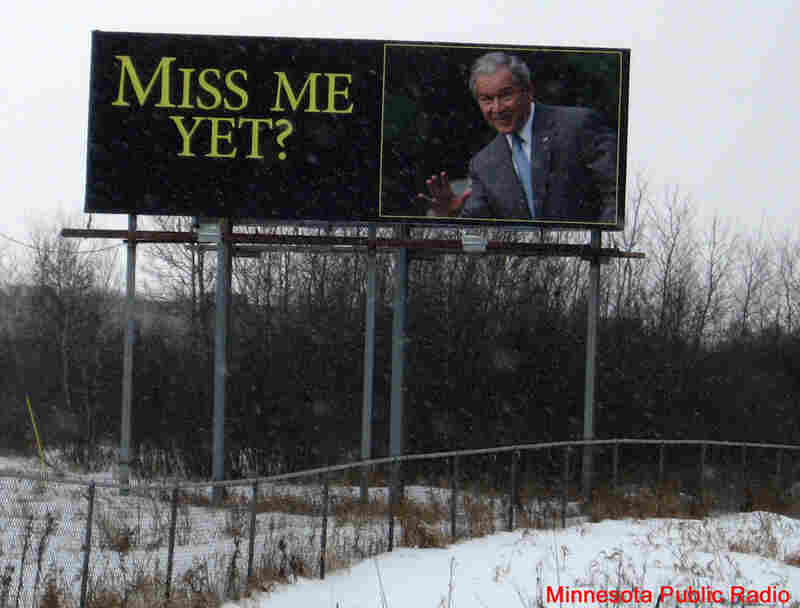 Who paid for it? We have a partial answer. By Bob Collins/Minnesota Public Radio hide caption

Internet chatter had led to speculation that it might be an urban myth -- nothing more than clever digital trickery spreading via the Web.

But our friend Bob Collins at Minnesota Public Radio assures us he's seen it with his own eyes:

There is a billboard along I-35 near Wyoming, Minn., with a huge photo of former president George W. Bush and this question: "Miss Me Yet?"

Now, the push is on to find out who paid to have it put up.

Bob says there's no readily apparent claim of ownership on the billboard, so he's heading back to the scene to see if he can find out who's behind the message. He's also got some local politicos looking into it. He'll keep us posted.

At first glance, it would seem to be from some person or group who isn't thrilled by President Barack Obama's performance so far -- unless it's a more ironic message from those who didn't think too much of Bush and want to remind voters about him.

Anyone out there know anything about where it came from? Tell us and we'll pass the word to Bob. As he says, we could do a little crowdsourcing.

Mary Teske, the general manager of Schubert & Hoey Outdoor Advertising reports, "The Bush Miss Me Yet? billboard was paid for by a group of small business owners who feel like Washington is against them. They wish to remain anonymous. They thought it was a fun way of getting out their message."

Update at 1:10 p.m. Feb. 9: No news yet on the person behind the billboard, so to speak. But Bob went by and took his own photo of it, so we're now using his shot above.

Click here to read the rest of The Two-Way.