Accessibility links
Colgan-Buffalo Plane Crash: Errors Began Pre-Flight : The Two-Way The Colgan Air crash in Buffalo in February 2009 which left 50 people dead was caused by a series of errors that began even before take off from Newark International Airport, with the pilot entering data into an on-board computer that correctly an... 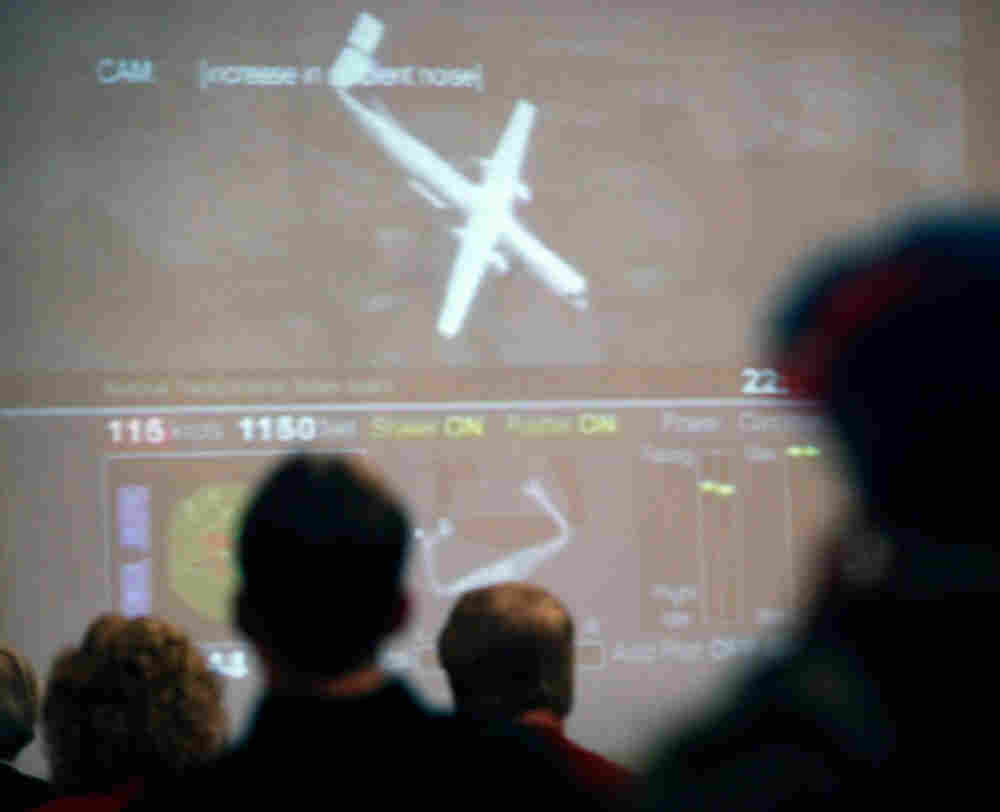 A simulation of the crash of Continental Connection Flight 3407 is shown to family members of the victims during a National Transportation Safety Board Meeting simulcast in Cheektowaga, N.Y., Tuesday, Feb. 2, 2010. David Duprey/AP Photo hide caption 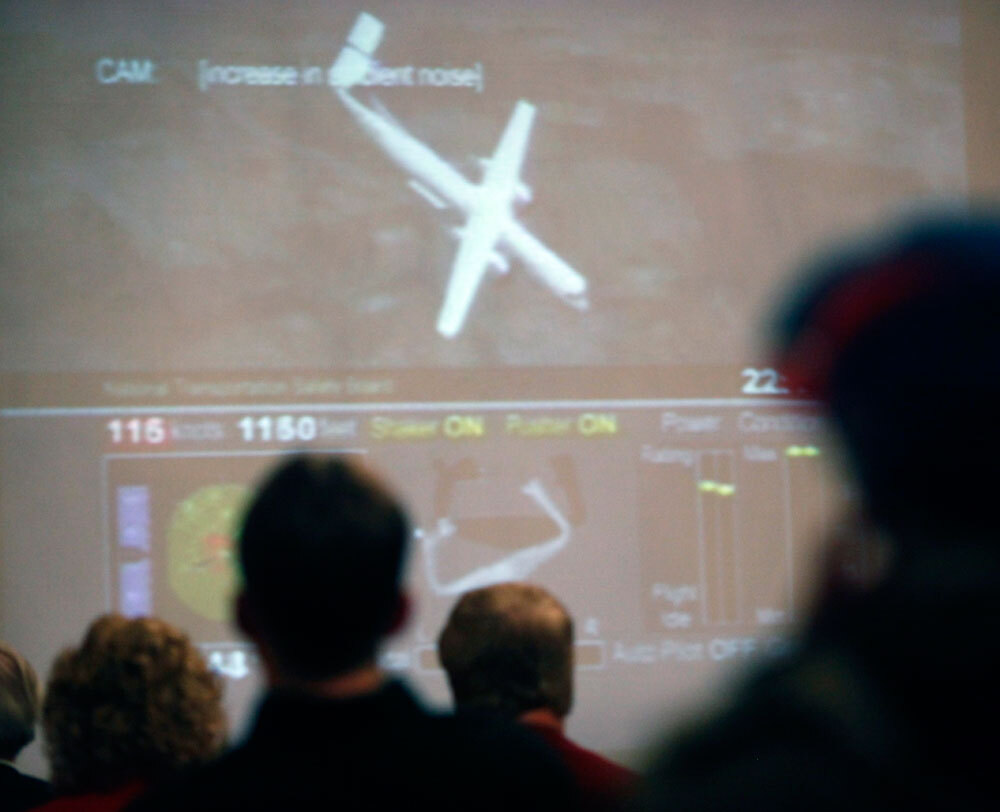 A simulation of the crash of Continental Connection Flight 3407 is shown to family members of the victims during a National Transportation Safety Board Meeting simulcast in Cheektowaga, N.Y., Tuesday, Feb. 2, 2010.

Accident experts often say there's usually not just one factor in a crash and that appears to be true in last year's crash of a regional commuter airplane which led to the crash near Buffalo, N.Y. that killed 49 people on the aircraft and one person on the ground.

According to federal investigators who discussed their findings at a hearing of the National Transportation Safety Board Tuesday, the pilots of the ill-fated flight erred even before take-off from Newark International Airport, with the pilot entering data into an on-board computer that anticipated icing conditions and the co-pilot entering conflicting information.

Then the pilot, Captain Marvin Renslow, 47, repeatedly reacted contrary to how he should have when the plane began to stall, pulling back on the control column rather than pushing it.

Also, as has been reported previously, the pilots violated federal rules about maintaining what's called a "sterile" cockpit at critical moments of the flight. For instance, they engaged in chit chat at moments when federal regulations required them to refrain from such activity.

More fundamental problems existed, according to investigators. Among them, Renslow had performance issues as a pilot and was a candidate for remedial training, the accident investigators said.

WASHINGTON (AP) - The head of a federal safety panel said Tuesday the pilots of a regional airliner that crashed near Buffalo, N.Y., nearly a year ago made critical errors showing
"complacency and confusion that resulted in catastrophe."

National Transportation Safety Board chairwoman Deborah Hersman said safety issues raised by the accident go beyond the mistakes that caused the crash. The board is meeting to determine the probable cause and make safety recommendations following the crash of Continental Connection Flight 3407, operated by regional air carrier Colgan Air Inc. of Manassas, Va.

The crash is considered one of the most significant accidents in recent years because it revealed what some safety experts and pilots unions say is a safety gap between major airlines and the regional carriers. Among the concerns raised by the accident is whether pilots with low-fare airlines are vulnerable to fatigue, long-distance commutes and inadequate training.

On Feb. 12, 2009, Flight 3407 was approaching Buffalo-Niagara International Airport when the twin-engine turboprop experienced an aerodynamic stall and dove into a house. All 49 people aboard and one man in the house were killed.

Investigators pinned the cause of the crash primarily on errors by the pilots. They said Captain Marvin Renslow should have been able to recover from the stall if he had taken the correct actions, but that he did the opposite of what he should have done.

In the final seconds of the flight, two pieces of safety equipment activated - a stick shaker to alert the crew their plane was nearing a stall and a stick pusher that points a plane's nose down so it can recover speed, investigators said. The correct response to both situations would have been to push forward on the control column to increase speed, they said.

But Renslow pulled back on the stick shaker, investigators said. When the plane stalled and the pusher activated, and then reactivated two more times, Renslow again pulled back all three times.

"It wasn't a split-second thing," NTSB safety investigator Roger Cox said. "I think there was time to evaluate the situation and intitiate a recovery, but I can't give you a number of seconds"

Seventy percent of pilots who had experienced the stick-pusher activation in training responded by pulling back instead of pushing forward - the opposite of the correct response - even though they knew ahead of time to expect a stall, investigators said.

The first officer, Rebecca Shaw, 24, should have stepped in to push the plane's nose down herself when Renslow responded improperly, but she may not have because she was a relatively inexperienced pilot, investigators said.

Shaw, 24, had earned less than $16,000 the previous year, which may have been why she lived with her parents near Seattle and commuted across the country overnight to Newark, N.J., to make Flight 3407. She felt sick but didn't want to pull out of the trip because she had already traveled so far, according to a cockpit voice recorder transcript.

It's not clear how much sleep either pilot received the night before the flight...

Colgan Air has been criticized by federal investigators for weaknesses in its treatment regime. It issued the following statement which in part was a defense of its training program:

Statement from Colgan Air Regarding NTSB Hearing on Flight 3407 February 2, 2010

MEMPHIS, Tenn. Feb. 2 /PRNewswire/ -- The National Transportation Safety Board (NTSB) hearing today is an important milestone in understanding what happened a year ago when Flight 3407 crashed outside Buffalo, New York, but it does not diminish the tragedy in which 50 people lost their lives.

We want to reiterate our heartfelt condolences to the families and friends of those who lost their lives in the accident, including five of our employees.

We want to make clear again that our pilots are highly trained to handle all situations they may encounter. Like all Colgan pilots, Captain Renslow and First Officer Shaw had thorough initial and recurrent training on how to recognize an impending stall situation and recover from it.

Since the accident, we examined every aspect of our operations to make sure that everything that could be done was being done. As a result, and as we have already publicly said, we have taken a number of important and specific steps to further enhance all of our training and hiring programs.

We want to make clear that we have repeatedly proven our commitment to safety. With the acquisition of Colgan Air in 2007, we immediately began to invest millions of dollars in upgrades to crew training, operations, leadership and equipment, and we continually work to enhance all of our programs because we are totally committed to safety. There can be no greater
priority.

Prior to the accident, we had also proactively begun to adopt a full range of voluntary safety initiatives recommended by the NTSB and the Federal Aviation Administration (FAA) and did so before any calls were made for such programs to be mandatory. With these investments, we have established the same or better capabilities as every other major carrier in the United States.

We are proud of the skill and professionalism of our flight crews and of all our 5,000 employees and of the systemic culture of safety throughout our organization.

We will review closely the findings and recommendations of the NTSB, and we will work closely with our industry colleagues and regulators to reinforce this primary industry objective.