Accessibility links
FDIC: 'Problem' Banks Rose 27% In 4th Qtr : The Two-Way Although several indicators suggest the health of the nations banks are improving, many banks entered the year still under a great deal of stress, Federal Deposit Insurance Corp. data suggest. The FDIC said Tuesday that problems with FDIC-insured ... 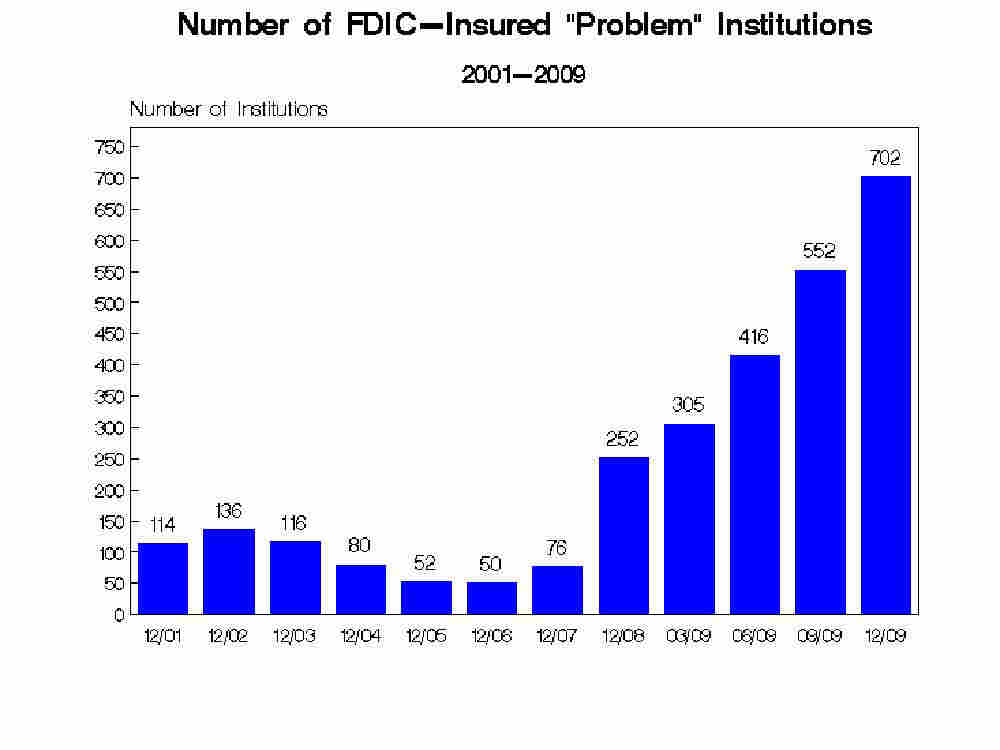 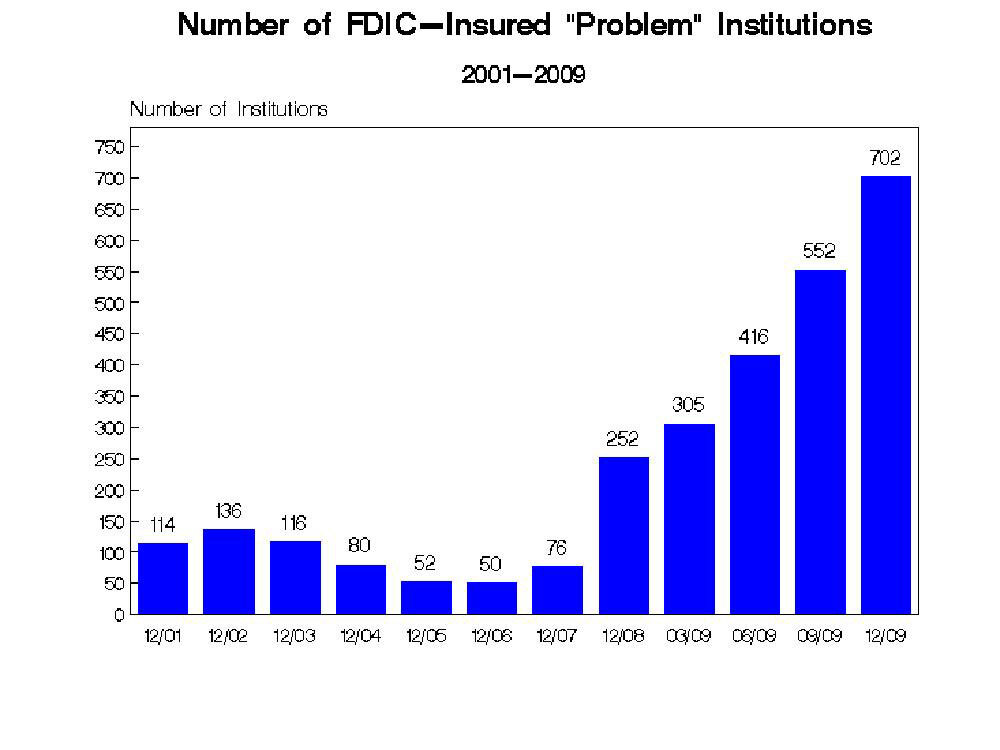 Although several indicators suggest the health of the nation's banks is improving, many banks entered the year still under a great deal of stress, Federal Deposit Insurance Corp. data suggest.

The FDIC said Tuesday that problems with FDIC-insured institutions rose 27 percent during 2009's fourth quarter to 702.

That's the highest number since 1993. The rise was expected, the FDIC said as part of its quarterly banking profile.

Despite a rise in such institutions, there were signs of improvement. FDIC-insured banks reported an overall fourth-quarter profit of $914 million.

Basically, the banking and savings industry was able to completely reverse $37.8 billion of fourth quarter losses in 2008 by adding $38.7 billion in profits in the fourth quarter of 2009. So they essentially recaptured all the lost ground and then some.

An excerpt from the FDIC's press release:

"Consistent with a recovering economy, we saw signs of improvement in industry performance," said FDIC Chairman Sheila C. Bair. "But as we have said before, recovery in the banking industry tends to lag behind the economy, as the industry works through its problem assets."

Several factors contributed to the year-over-year improvement in quarterly earnings. Noninterest income was $21.7 billion (53.2 percent) higher in the fourth quarter than a year earlier and noninterest expense declined by $16.2 billion (14.2 percent). Realized losses on securities and other assets were $8.7 billion lower and net interest income was $1.7 billion (1.8 percent) higher. Provisions for loan losses totaled $61.1 billion in the quarter, a decline of $10.0 billion (14.1 percent) from the fourth quarter of 2008. This is the first time since the third quarter of 2006 that quarterly loss provisions have been below year-earlier levels.

Total loans and leases declined by $128.8 billion (1.7 percent) during the quarter. This is the sixth consecutive quarter in which the industry's loan balances declined. Loans to commercial and industrial (C&I) borrowers declined by $54.5 billion (4.3 percent) and real estate construction and development loans declined by $41.5 billion (8.4 percent).

Referring to more stringent lending standards and lower real estate values, Chairman Bair said, "Resolving these credit market dislocations will take time. We encourage institutions to lend using a balanced approach as outlined in the recent interagency policy statements. Institutions should neither over-rely on models to identify and manage concentration risk nor automatically refuse credit to sound borrowers because of those borrowers' particular industry or geographic location."

Bair is clearly concerned by the declining loan balances, that they indicate banks aren't making the volume of loans needed to spur the economy higher.

So she's encouraging them to not just reflexively deny loans to applicants based on unbending criteria.