Accessibility links
Laura Silsby, Haiti 'Orphans' ' Would-Be Rescuer, Serial Rule Breaker : The Two-Way The picture that's starting to emerge of Laura Silsby, the leader of the group of U.S. Baptist missionaries now in Port-au-Prince jail cells for attempting to transport Haitian children without that government's approval, out of the earthquake-dev... 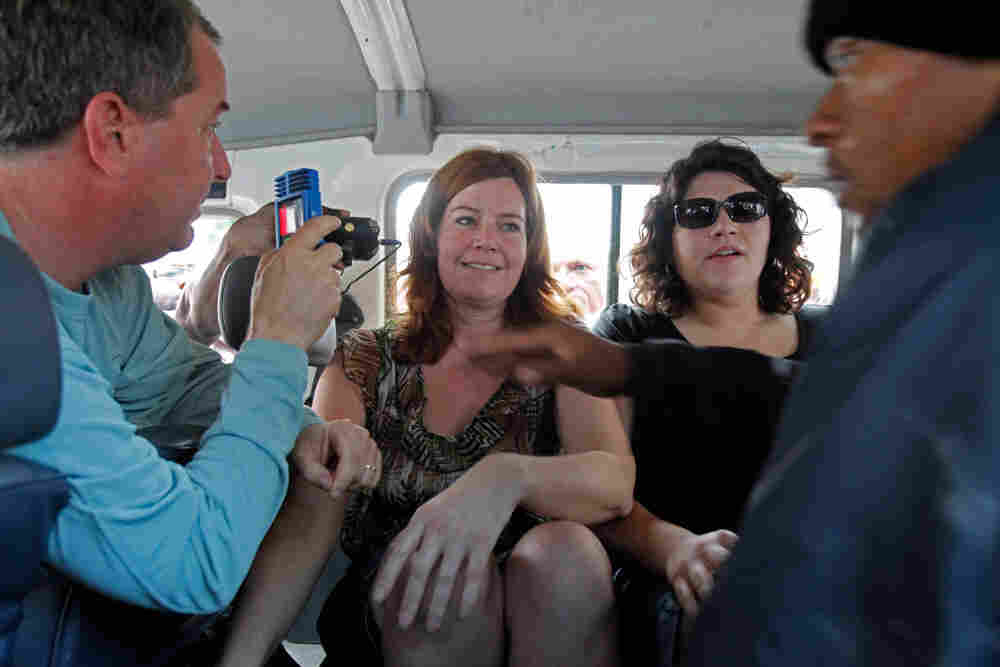 Laura Silsby, 40, center left, and Charisa Coulter, 24, both of Meridian, Idaho, watch as a Haitian police officer, right, asks a journalist to leave the police truck taking them back to jail in Port-au-Prince, Thursday, Feb. 4, 2010. Ariana Cubillos/AP Photo hide caption 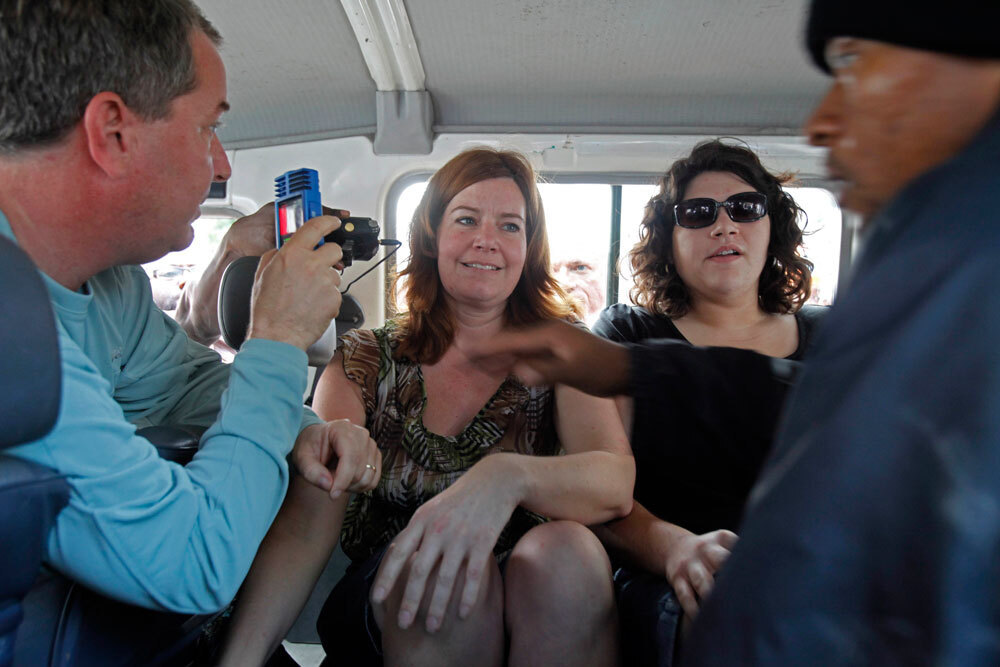 Laura Silsby, 40, center left, and Charisa Coulter, 24, both of Meridian, Idaho, watch as a Haitian police officer, right, asks a journalist to leave the police truck taking them back to jail in Port-au-Prince, Thursday, Feb. 4, 2010.

The picture that's starting to emerge of Laura Silsby, the leader of the group of U.S. Baptist missionaries now in Port-au-Prince jail cells for attempting to transport Haitian children without that government's approval, out of the earthquake-devastated nation, is of a woman who arguably found a lot of society's rules optional.

But while she was able, to a degree, to get away with playing outside the lines on American soil, Haiti may be a different matter. Silsby is described by people who know her as well-meaning if unable to keep her end of financial agreements.

If I were Silsby's lawyer, one of the pieces of information I'd be most worried about is in a Wall Street Journal story.

Silsby has said publicly that she had permission and paperwork from the Dominican Republic to bring the Haitian children into that country from Haiti.

But the DR's consul general in Port-au-Prince flatly contradicts that:

Carlos Castillo, the Dominican Republic's consul general in Port-au-Prince, gave a different account: In an interview he said he met with Ms. Silsby on Friday and told her she lacked any documents to transport children, and warned her not to try or she could be arrested.

Again, the problem for Silsby is that it will be hard for her lawyer to argue that the story told by the DR's diplomat is out of character with his client's past given the profile of her that's emerging.

For instance, the Idaho Statesman, which serves her home state, reports she had been pursued legally by a number of creditors for repeatedly not paying bills, including wages to employees of her online personal shopping business.

... Even before Laura L. Silsby and seven other Idahoans ended up in a Haitian jail accused of trafficking in children, Silsby had a history of failing to pay debts, failing to pay her employees and failing even to follow Idaho laws.

Silsby has been the subject of eight civil lawsuits and 14 unpaid wage claims. The $358,000 Meridian house at which she founded her nonprofit New Life Children's Refuge in November was foreclosed upon in December. A check of Silsby's driving record revealed at least nine traffic citations since 1997, including four for failing to provide insurance or register annually.

Silsby is a longtime Treasure Valley businesswoman. In 1999, she founded an Internet business. As CEO of PersonalShopper.comnear Overland and Maple Grove roads, the mother of three was named eWomenNetwork's international businesswoman of the year in 2006.

The Wall Street Journal adds additional details to the Silsby story. The impression you could get is that she has dreams that are outsized with her ability to pull them off.

According to a document from Ms. Silsby and Ms. Coulter describing New Life, it is "dedicated to rescuing, loving and caring for orphaned, abandoned and impoverished Haitian and Dominican children, demonstrating God's love and helping each child find healing, hope, joy and new life in Christ."

They shared their interest in Haitian children at the Central Valley Baptist Church, a congregation they attended in Meridian, Idaho, a Boise suburb. The church, which has an international mission program, embraced the pair's efforts and joined the planning, said Drew Ham, one of its pastors.

New Life Children's Refuge began the process of buying land in Magante, on the north coast of the Dominican Republic, to build an orphanage for as many as 200 children--with a school, a chapel and seaside villas for adopting parents, according to the document.

Ms. Silsby and Ms. Coulter traveled to the Dominican Republic and Haiti last July and late last year. They were "laying the groundwork" then for opening an orphanage, said Mel Coulter, Ms. Coulter's father. They coordinated with people there who they thought were handling necessary details and "running interference for them," he said, so they thought "they had everything they needed" in documentation, Mr. Coulter said.

Ms. Silsby had equally grand ambitions closer to home, according to a local builder. The Idaho plan called for a "multi-million-dollar complex" for runaway children on a 40-acre lot in Kuna County, Idaho, according to Eric Evans, owner of Eric Evans Construction in Meridian. Ms. Silsby told him it would have an indoor swimming pool, tennis courts and dormitories for the children, said Mr. Evans, adding that she had discussed having him build the project. Ms. Silsby's mother said she had never heard of any such plan.

Ms. Silsby had purchased a two-story house in Meridian, where a neighbor said she was known for her blue Lexus convertible and her dog, Bentley. Her financial difficulties mounted last year. Idaho court records show several judgments against Ms. Silsby in 2009. Activity in the offices of Ms. Silsby's business, Personal Shopper Inc., visibly slowed, said Scotty Bates, a manager at SpeedyQuick Networks Inc., an Internet service provider whose office is in the same building as Personal Shopper. On Thursday, Personal Shopper's offices were locked and dark.