Accessibility links
SeaWorld Whale Kills Trainer During Show : The Two-Way A SeaWorld trainer was killed during a show to the popular park in Orlando, Fla. on Wednesday. 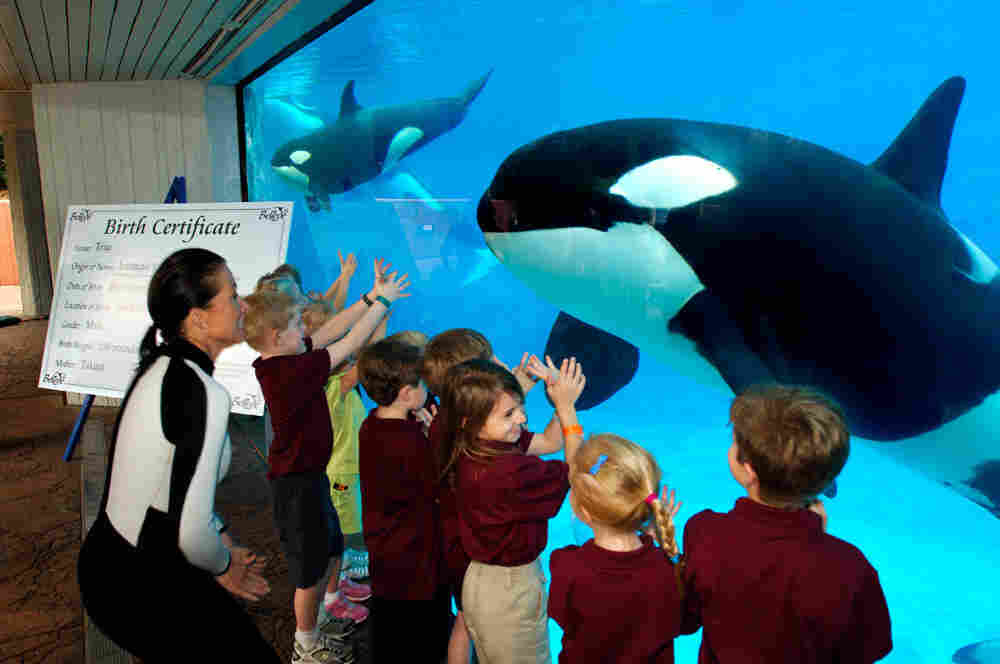 Update at 6:25 pm ET -- The same killer whale responsible for the death of a SeaWorld Orlando trainer Wednesday was implicated in the death of a trainer in 1991 at SeaLand in British Columbia, Canada.

It is the third death associated with Tilikum. In 1999 the body of a man who stayed at SeaWorld after closing time was found in the killer whale's tank. His death was blamed on hypothermia but he had bruises and scratches on his body.

Update at 6:17 pm ET -- The trainer fatally wounded by a Sea World Orlando killer whale was identified as 40-year-old Dawn Brancheau. She was profiled by the Orlando Sentinel in 2006.

The profile says trip to SeaWorld when she was 9 is what decided her on her career to work with marine mammals. She spent 18 years at the marine park and the past 14 years working with killer whales.

Update at 5:23 pm ET -- PETA, the animal-rights group, has a statement after a SeaWorld Orlando orca killed a trainer.

The death of the SeaWorld trainer following the attack by Telly the whale is a tragedy that didn't have to happen. For years, PETA has been calling on SeaWorld to stop confining oceangoing mammals to an area that to them is like the size of a bathtub, and we have also been asking the park to stop forcing the animals to perform silly tricks over and over again. It's not surprising when these huge, smart animals lash out. This is not the first incident in which a trainer has been harmed by an animal who has been deprived of any semblance of life. It's time for SeaWorld to heed PETA's advice and let marine mammals live in peace with their families in the world's oceans. Switching to giant robotics would be a win-win situation that could have saved a woman's life today.

Update at 4:57 pm ET -- The whale involved in Wednesday's incident in which a trainer was killed at SeaWorld Orlando has been identified as Tilikum.

The dead trainer hasn't been named but was said by SeaWorld and law enforcement officials to be a 40-year old woman and a senior trainer.

In a press conference, officials said the trainer slipped into the water.

But a marine park guest who witnessed the incident said in an interview played on CNN that it occurred before a show. The original post said the incident took place during the show. That apparently was wrong information.

She described the whale swimming quickly up from lower down in the tank, grabbing the trainer by the waist and violently shaking her. The trainer's shoe came off in the tank, the witness said.

She also described a sirens sounding and SeaWorld employees seemingly running from every direction to the killer whale tank. She said guests were told they had to leave the area immediately.

Tilikum was involved in a 1999 incident in which a dead 27-year old man was found on top of the whale. The dead man was scratched and bruised according to an Associated Press story though it was ruled he died from hypothermia after sneaking past park security and staying in the park past closing.

A SeaWorld trainer was killed during a show at the popular park in Orlando, Fla. on Wednesday.

It's being reported that the trainer had finished explaining to the audience what they were about to see when the whale swam up out of the water, grabbed her and whipped her around in the way the whales normally use to kill prey, like seals.

Captive killer whales have been known to attack and kill their trainers.

The Orlando Sentinel reports the following:

Park guest Victoria Biniak told Local 6 that the trainer was a veteran of SeaWorld and had just finished explaining to the audience the show they were about to see.

At that point, Biniak said, the whale came up from the water and grabbed the woman.

"He was thrashing her around pretty good. It was violent,'" Biniak told Local 6.

The whale "took off really fast in the tank, and then he came back, shot up in the air, grabbed the trainer by the waist and started thrashing around, and one of her shoes flew off."

She said sirens went off and everyone was forced to leave the stadium.

Guests were evacuated from the area. The park is not shut down.

The U.S. Humane Society has opposed the use of killer whales at sea parks, arguing that such venues don't fill the animals' needs the way nature would.

An excerpt from a USHS document produced after a previous SeaWorld attack:

Ky, like every captive wild animal in the world, whether a circus elephant or a white tiger in Las Vegas, has complex physical and behavioral needs, which can never be fully satisfied in captivity. Breeding is just one of many such needs among killer whales, commonly known as orcas. They also require lots of open water and the life-long companionship of their own family members.

That's one reason why The HSUS is constantly encouraging summer vacationers to avoid marine parks: Visitors only help perpetuate this grim illusion--that orcas and dolphins are perfectly content performing in tanks that can never recreate their natural environment.

"To say that Ky's actions were motivated by his teenage hormones is a bit like saying a lion's hunting instincts are motivated by his appetite," says Naomi Rose, The HSUS's marine mammal scientist. "Well, yeah, maybe that's right. But that's not the point. The point is humans cannot predict, let alone control, these natural behaviors. The danger in thinking we can control these animals is injury, maybe even death."