Accessibility links
Google Hit By Early Fallout From China Decision : The Two-Way A day after it announced its that it would stop censoring search results and that it would move its Chinese language search servers to Hong Kong from mainland China, Google started to see some fallout from its decision. It appears that some Chines... 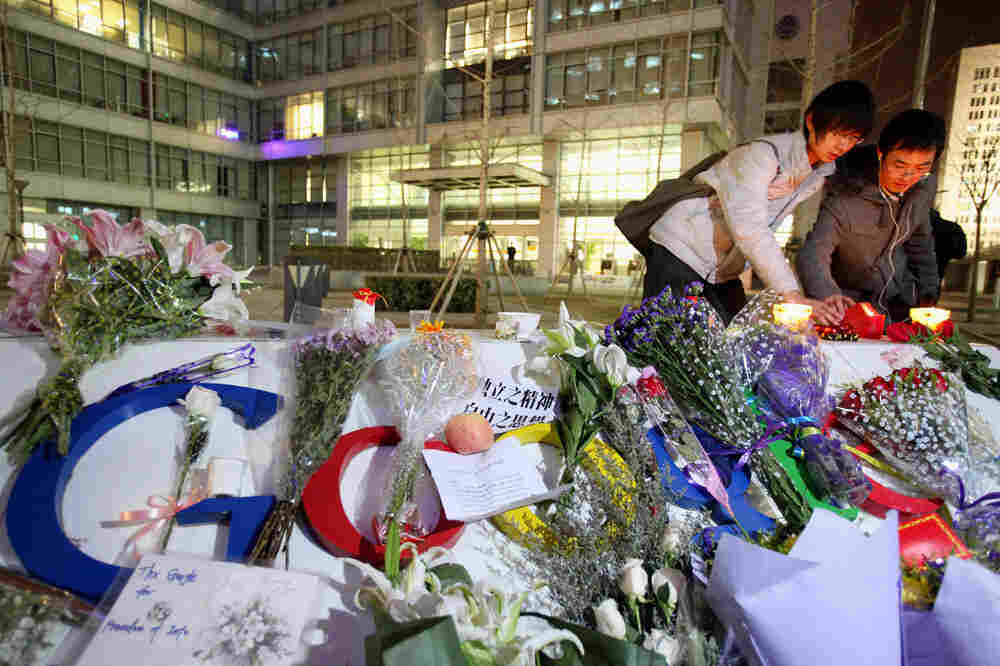 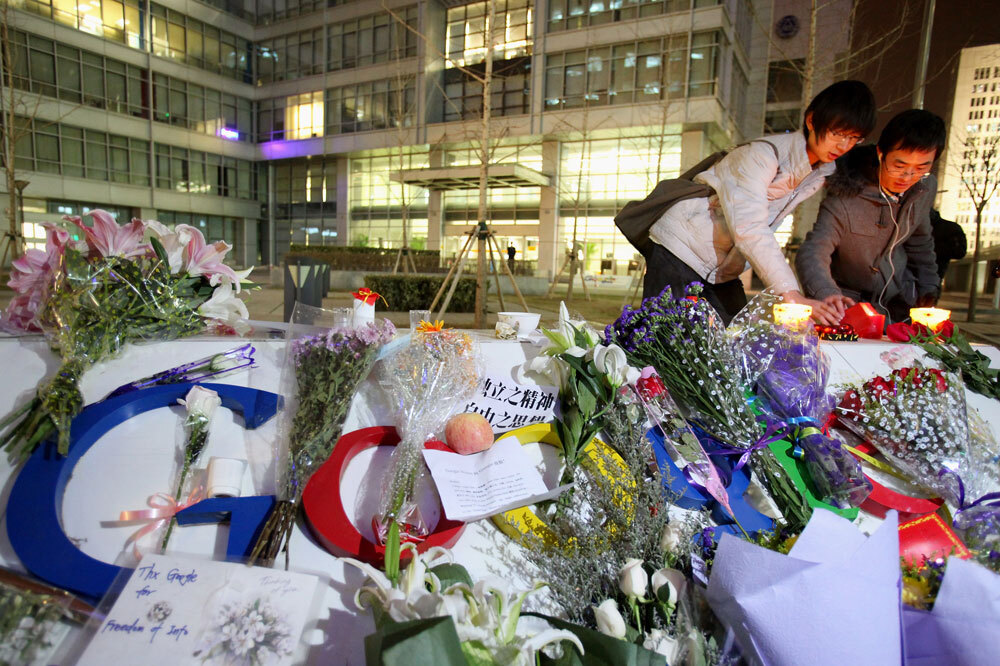 Google's fans light the candles on the Google logo at its China headquarters building on March 23, 2010 in Beijing, China.

A day after it announced its that it would stop censoring search results and that it would move its Chinese language search servers to Hong Kong from mainland China, Google started to see some fallout from its decision.

It appears that some Chinese companies may be finding Google to be somewhat radioactive.

TOM Online, a provider of online and mobile services in China that is owned by a Hong Kong tycoon, said it would not renew an alliance with Google to avoid violating any Chinese laws. Owners of Chinese businesses also may be more reluctant to advertise on Google for fear of reprisals.

Meanwhile, there was evidence that someone, presumably China, was blocking access to certain of Google's websites.

More from the AP:

But that end-run doesn't prevent China's government from using its Internet filters - known as the Great Firewall - to block some search results and Web sites from being seen in the mainland.

On Tuesday, a search request from within mainland China about the 1989 Tiananmen democracy protests returned a notice that the "page cannot be displayed." It also caused the Web browser to disconnect for several seconds. Under the old google.cn, a similar query usually returned a list of sanitized sites about TiananmenSquare.

If the Chinese leaders really want to foil Google, they could block all mainland access to the Hong Kong service. Or they could exert their control of Chinese telecommunications companies to slow the speed of queries and responses, to help drive traffic to homegrown rivals.

"It really comes down to the extent of their vindictiveness," said Duncan Clark, managing director of BDA China Ltd., a technology market research firm.

Meanwhile, State Department spokesman P.J. Crowley suggested that China might want to be somewhat introspective about the signal Google's decision to other global companies who might be eager to do business in China but worried about the government's heavy handedness.

His comments came in the following exchange with a reporter at the State Department:

REPORTER: Back to Google for a minute if it's okay, does the State Department support Google's decision to stop censoring?

MR. CROWLEY: It's Google's decision. We -- as the secretary said, we support Internet freedom. We believe that the unimpeded flow of information through search engines across the Internet, other technologies is a -- is a fundamental right and a universal principle. But as to a particular decision that Google has made, it was theirs to make.

REPORTER: Did the State Department encourage this decision or --

MR. CROWLEY: The State Department was not a party to this decision.

MR. CROWLEY: This was Google's decision, and we respect it.

REPORTER: Staying on the same subject, is the -- is the U.S. now concerned that the cost of doing business in China, being a major player in China is that the company can expect information -- industrial information, intellectual property information to be -- you know, to be sieved out to either the business community in China or even government sources? Because that's one of the major concerns that underlies this whole incident.

MR. CROWLEY: Sure, well, intellectual property concerns have been an ongoing, you know, topic of discussion and concern in our relationship with China. We have expressed those views on a number of occasions.

Ultimately, you know, individual businesses will make judgments as to the investment opportunity in China. We value the economic relationship between the United States and China. Our trade has grown exponentially over the past 20, 25 years, you know.

That said, I think, you know, were I China, I would -- I would seriously consider the implications when one of the world's most recognizable institutions has decided that it's too difficult to do business in China. And that has implications, but that ultimately is a -- is a -- is something for China to evaluate.