Accessibility links
One Million 'Infantino' Baby Slings Recalled : The Two-Way One million "SlingRider" and "Wendy Bellissimo" baby slings made by Infantino are being recalled

After being linked to the deaths of three babies in the past year, about 1 million "SlingRider" and "Wendy Bellissimo" baby slings made by Infantino are being recalled, the Consumer Product Safety Commission just announced.

Earlier this month, CPSC issued a warning about the popular infant carriers.

Today, as the Associated Press writes, CPSC said "babies can suffocate in the soft fabric slings" and that it is "urging parents to immediately stop using the slings for babies under 4 months."

Back in April 2008, Consumer Reports' Safety Blog wrote that:

"Baby slings may be fashionable among Hollywood stars and other new parents but at a recent meeting I learned about some safety concerns that made me shudder. Over the past 10 years, there have been at least 22 reports of serious injury associated with the use of sling-type carriers. The injuries include skull fractures, head injuries, contusions and abrasions. Most occurred when the child fell out of the sling."

It reads, in part:

The Infantino "SlingRider," is a soft fabric baby carrier with a padded shoulder strap that is worn by parents and caregivers to carry an infant weighing up to 20 lbs. "Infantino" is printed on the plastic slider located on the strap. "Infantino," "SlingRider" and the item number are printed on the instruction/warning label inside the baby sling carrier. "Wendy Bellissimo" branded sling carriers were sold exclusively at Babies "R" Us and have a sewn-in label on the inside of the sling strap that says in part "Wendy Bellissimo Media, Inc." and lists Item numbers 3937500H7 and 3937501H7.

Infantino LLC sold the slings in the United States and Canada from January 2003 through March 2010 at Walmart, Burlington Coat Factory, Target, Babies "R" Us, BJ's Wholesale, various baby and children's stores and other retailers nationwide, and on the Web at Amazon.com, for between $25 and $30.

Infantino now has recall information posted here. And it has produced a poster about the recall: 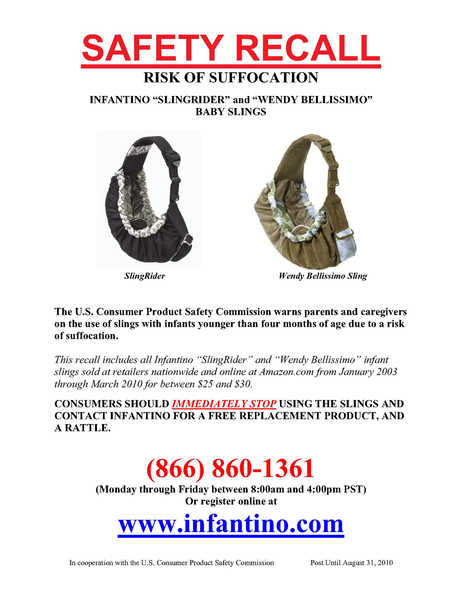