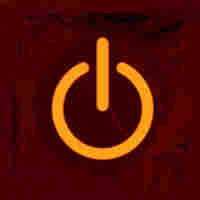 New Yorkers have decided their official condom should come with a power button.

"After tallying more than 15,000 online ballots," New York City's Health Department reports, "the winning design for the special limited-edition NYC Condom wrapper ... is the electronic power button submitted by Luis Acosta of Kew Gardens, Queens. With more than 23% of the votes, Acosta's entry squeaked past four other finalists to claim first place."

The thought is that the button is a symbol for having the power "to take control and practice safer sex," the Health Department says. We'll leave it to others to debate whether the symbol can be viewed in somewhat more suggestive ways.

As our friend Scott Hensley wrote last month at NPR's Shots blog, "the city promotes the use of condoms to reduce the risk of sexually transmitted diseases and cut down on unplanned pregnancies. Part of making condoms more popular is making them cool." Hence, the contest for a design to go on the free condoms' wrappers.

NPR's Robert Smith will unwrap more details about this story on All Things Considered later today. Click here to find an NPR station that broadcasts or streams the show. After the show airs, his report will be posted here.