Accessibility links
Burning Oil Rig Sinks In Gulf Of Mexico; 11 Still Missing : The Two-Way The burning off-shore oil rig Deepwater Horizon has sunk in the Gulf of Mexico, according to reports. The rig experienced an explosion Tuesday night. Of the 126 person crew, 11 were still missing of this writing with the Coast Guard continuing its... 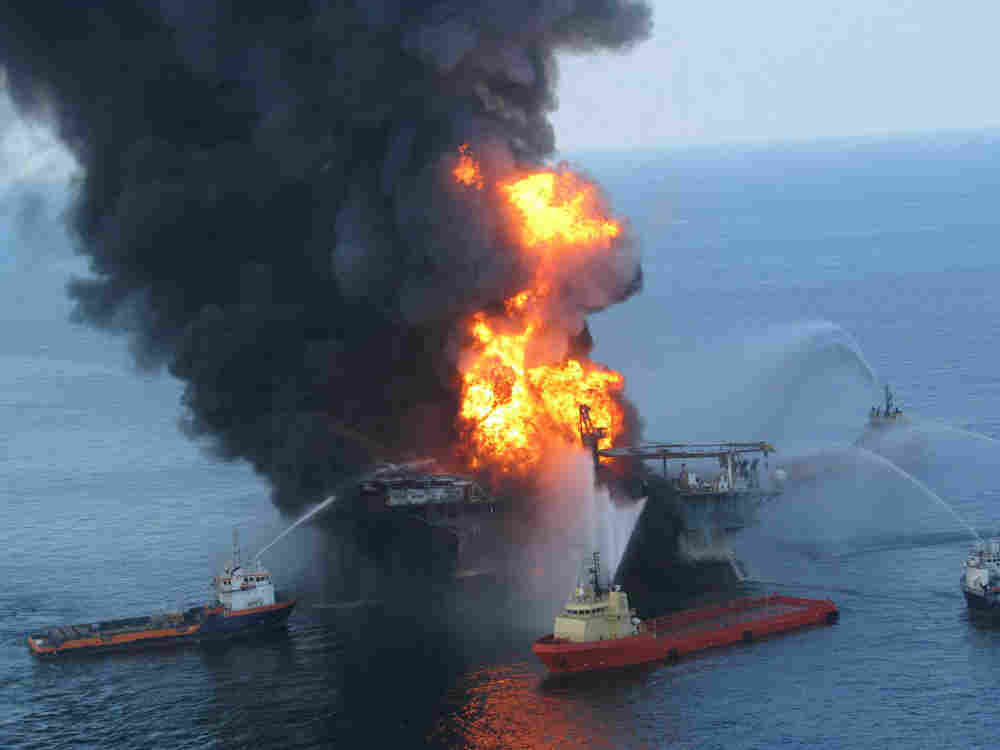 This US Coast Guard image released on April 22, 2010 shows fire boat response crews as they battle the blazing remnants of the off shore oil rig Deepwater Horizon April 21, 2010.

Updated at 4:10 pm ET -- It appears an ecological disaster may join the human one resulting from the explosion, fire and sinking of the oil platform in the Gulf of Mexico that has left 11 people missing and 17 injured. The Associated Press reports:

NEW ORLEANS (AP) - Officials are saying that an explosion on an oil rig off the coast of Louisiana has the potential to be a major spill.

No more details than that currently.

Updated at 4:00 pm ET -- The Wall St. Journal is reporting that BP was just days away from announcing it had discovered a significant amount of oil at the Gulf of Mexico site of Tuesday's oil-platform explosion which has resulted in 11missing crew members and, on Thursday, the sinking of the platform.

BP PLC was days away from announcing a "commercially attractive" oil discovery in the Gulf of Mexico where a drilling rig caught fire and sank, according to a person familiar with the matter...

... The Macondo Prospect, where Transocean drilled the well, contained "tens of millions of barrels" of reserves, the person familiar with the matter said.

The rig had been drilling in 5,000 feet of water at Macondo, to a total depth of 8,350 feet, or about 1.5 miles, and had recently completed the well, part of the process of preparing it for production. BP, which was leasing the rig, was already working on a development plan for the field.

Deepwater Horizon, built in 2001, was the rig that made last year's giant discovery in BP's Tiber field, also in the Gulf of Mexico, after drilling the deepest commercial well in the history of the oil industry.

Experts say the fire was likely caused by a blow-out, an uncontrolled release of fluids from the reservoir into the riser--the pipe that connects the well to the oil rig--and onto the platform itself, where it ignited.

Any investigation into the disaster will focus on why the Horizon's blowout preventer, a large valve at the top of a well that can be closed remotely using hydraulics, failed to activate. Analysts estimate the rig would cost more than $600 million to replace.

Updated at 3:45 pm ET -- BP, the energy company associated with the Deepwater Horizon oil platform that sunk in the Gulf of Mexico Thursday, is mounting an "extensive oil spill response," the company said in a statement, to try and contain the environmental impact from the accident.

"We are determined to do everything in our power to contain this oil spill and resolve the situation as rapidly, safely and effectively as possible," said Group Chief Executive Tony Hayward. "We have assembled and are now deploying world-class facilities, resources and expertise, and can call on more if needed. There should be no doubt of our resolve to limit the escape of oil and protect the marine and coastal environments from its effects."

The government and the companies are monitoring the area for any oil spills.
"We have no reports of any of that spewing out into the water, but we were preparing in advance to mitigate any kind of environmental impacts," said Katherine McNamara, Coast Guard fireman, in a telephone interview.

BusinessWeek also reports that if the 11 missing men aren't found alive and declared dead, the accident will be the most deadly involving an offshore platform since 1968.

The burning off-shore oil platform Deepwater Horizon has sunk in the Gulf of Mexico, according to reports.

The rig experienced an explosion Tuesday night and had a raging fire on it since then that sent up a thick plume of dark smoke visible for many miles. Of the 126-person crew, 11 were still missing of this writing with the Coast Guard continuing its search mission for them.

Crews searched by air and water for 11 workers still missing from the Deepwater Horizon, though one relative said family members have been told it's unlikely anyone survived Tuesday night's blast.

Supply vessels had been shooting water into the rig try to control the flames enough to keep it afloat, but it sank Thursday morning, Coast Guard Petty Officer Katherine McNamara said.

The Coast Guard has a web site with updates on its search and response mission.