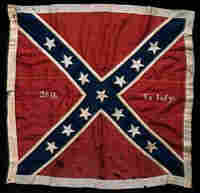 Virginia Gov. Bob McDonnell on Tuesday signed a proclamation that re-instituted April as Confederate History Month for the first time in the Cradle of the Confederacy since 2001.

In his proclamation, McDonnell tried to find some common ground since commemorating Confederacy is not exactly popular with many of his constituents, particularly African Americans, for obvious reasons.

WHEREAS, all Virginians can appreciate the fact that when ultimately overwhelmed by the insurmountable numbers and resources of the Union Army, the surviving, imprisoned and injured Confederate soldiers gave their word and allegiance to the United States of America, and returned to their homes and families to rebuild their communities in peace, following the instruction of General Robert E. Lee of Virginia, who wrote that, "...all should unite in honest efforts to obliterate the effects of war and to restore the blessings of peace."...

It is true that Lee could have changed history if he had ordered his army to blend into the countryside to fight a guerrilla war. Historians believe Lee singlehandedly save the nation from an even greater convulsion and blood letting.

WHEREAS, it is important for all Virginians to reflect upon our Commonwealth's shared history, to understand the sacrifices of the Confederate leaders, soldiers and citizens during the period of the Civil War, and to recognize how our history has led to our present...

Wasn't slavery part of that history that's so important to an understanding of how the past has led to the present?

But the document does represent progress of a sort. A conservative Southern governor uses the words "Civil War" in an official proclamation.