Accessibility links
Flip Flops In Arctic And Other Marine Debris : The Two-Way The oceans have long been, intentionally or unwittingly, the world's largest garbage dumps. For that reason, every year since 1986, the Ocean Conservancy has spearheaded a global trash cleanup day and, since 1999, recorded what's been removed from...

Flip Flops In Arctic And Other Marine Debris

Flip Flops In Arctic And Other Marine Debris

The oceans have long been, intentionally or unwittingly, the world's largest garbage dumps. 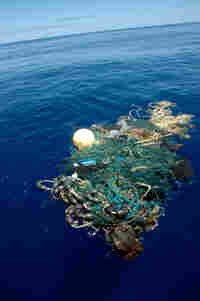 For that reason, every year since 1986, the Ocean Conservancy has spearheaded a global trash cleanup day and, since 1999, recorded what's been removed from the oceans, beaches, lakes, rivers, or their banks, that feed into the world's largest bodies of water.

On Tuesday, the Ocean Conservancy released the report for its 2009 cleanup which involved nearly half a million volunteers in 108 counties who picked up plastic bottles, fishing line, syringes and a host of other discarded material last September.

In 2009, the volunteers gathered 7.4 million pounds of marine debris and 10.2 million individual pieces. As in past years, cigarettes and cigarette filters constituted the single largest category of items collected by volunteers. That's just one more reason for people to quit smoking, especially those who enjoy the outdoors or consider themselves environmentalists.

As in past years, what amounted to something of an ocean-garbage census gave an insight into just how far some of the discarded items can travel because of ocean currents or wind.

Philippe Cousteau, the conservationist and Ocean Conservancy board member, was quoted in an Associated Press story about this problem though I'm not sure his example is the best:

But for Philippe Cousteau, the beach sandals that washed up in the Norwegian arctic symbolized the global nature of the problem of marine debris.

"We saw flip-flops washing ashore on these islands in far northern Norway near the Arctic Circle," Cousteau, a conservationist and grandson of famed oceanographer Jacques
Cousteau, said in a telephone interview.

Cousteau was commenting on marine debris statistics released on Tuesday by the Ocean Conservancy group.

"People don't wear flip-flops in the Arctic, at least not if they're sane," Cousteau said. "I think people are starting ... to realize that this is a global problem."

The problem with the flip flop example is it's hard to know exactly where they came from. Maybe someone in Longyearbyen, a settlement on the archipelago of Svalbard in the Arctic Ocean, used them as shower slippers. It's hard to know.

But Cousteau's larger point is well taken, solid garbage can travel vast distances in the oceans the way emissions travel in the air. NPR's Elizabeth Shogren reported on how this problem was affecting birds on Midway Atoll in a 2007 report on All Things Considered.