Accessibility links
U.S. Frigate Makes Short Work Of Five Pirates In Indian Ocean : The Two-Way USS Nicholas. (Courtesy of U.S. Navy.)" class="img462" /> The Nicholas. (U.S. Navy) By Mark Memmott Pirates in the Indian Ocean west of the Seychelles appear to have chosen the wrong ship to fire on very early this morning. It was the ... 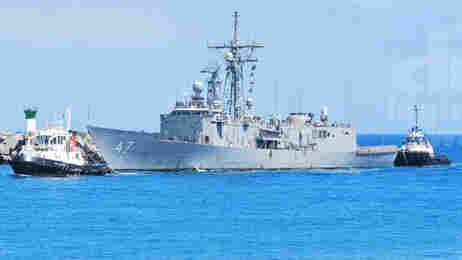 Pirates in the Indian Ocean west of the Seychelles appear to have chosen the wrong ship to fire on very early this morning.

It was the USS Nicholas, a U.S. Navy frigate and in less than three hours it had captured five pirates, sunk their skiff and confiscated their "mother ship."

For the Navy's account of the action, there's this story from Chief Petty Officer Michael Lewis posted on the Pentagon's "DVIDS" website.

"While operating west of the Seychelles in international waters, Nicholas reported taking fire at 12:27 a.m. local time from a suspected pirate skiff and returned fire before commencing pursuit of the vessel until the disabled skiff stopped.

"At 1:59 a.m. personnel from Nicholas boarded the disabled skiff and detained three personnel. The boarding team found ammunition and multiple cans of fuel on board.

Last month, the Pentagon posted this "B-roll" video of sailors from the Nicholas training with members of the Mauritius National Coast Guard in such skills as "taking down suspects" and taking over hostile ships:

It would seem the training was put to use today.