Accessibility links
BP Apologizes, Agrees To Put Billions In Escrow, Plans To Withhold Dividends : The Two-Way BP's chairman apologized to Americans. He and President Obama announced the creation of a fund to pay claims brought by Gulf Coast residents and small businesses. 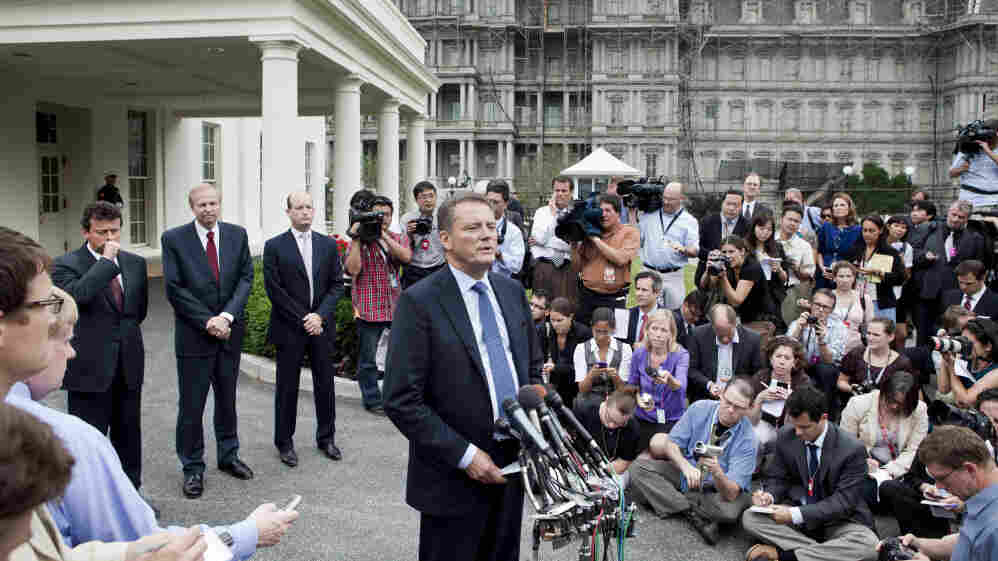 Speaking to reporters at the White House a few minutes ago, President Obama announced BP's decision to put $20 billion in escrow, to be administered by an individual, independent third party, to pay claims brought by individuals and small businesses along the Gulf Coast.

The president said the amount, which he acknowledged could grow larger, "will provide substantial assurance that the claims people and business have will be honored."

Obama and senior members of his administration met with BP executives, including the company's chairman, Carl-Henric Svanberg, for several hours today.  The president said the meeting was "constructive," and the discussion about claims was "essential."

Following Obama's remarks, Svanberg apologized to the American people on behalf of BP, and announced his company's decision not to pay further dividends on its stock this year.

"We have always met our obligations and responsibilities, and we have made clear from the first moment of this tragedy that we will live up to all our legitimate responsibilities," he said.

We have agreed to day with the president on a framework that should assure the American people that we mean what we say.  We will look after the people affected, and we will repair the environmental damage to this region and to the economy.

Obama said the meeting centered on two central issues: "the containment of oil that is still spewing into the Gulf," and claims by Gulf Coast residents and small businesses.

"My administration has directed BP to mobilize additional equipment and technology," the president said. "In the coming days and weeks, these efforts should capture up to 90 percent of the oil leaking out of the well."

That is still not good enough.  We will continue to press BP and draw on our best minds and resources to capture the rest of the oil until the company finishes drilling a relief well later in the summer that is expected to stop the leak completely.

Obama said that, on a recent trip to the Gulf Coast, he "heard growing frustration over the pace at which claims have been paid."

BP’s liabilities for this spill are significant. They acknowledge that fact. And we will continue to hold BP and all other responsible parties accountable. I’m absolutely confident BP will be able to meet its obligations to the Gulf Coast and to the American people. BP is a strong and viable company and it is in all our interests that it remains so. This is about accountability.  At the end of the day, that’s what every American wants and expects.