John Lennon's 'A Day In The Life' Manuscript Sold

John Lennon's 'A Day In The Life' Manuscript Sold 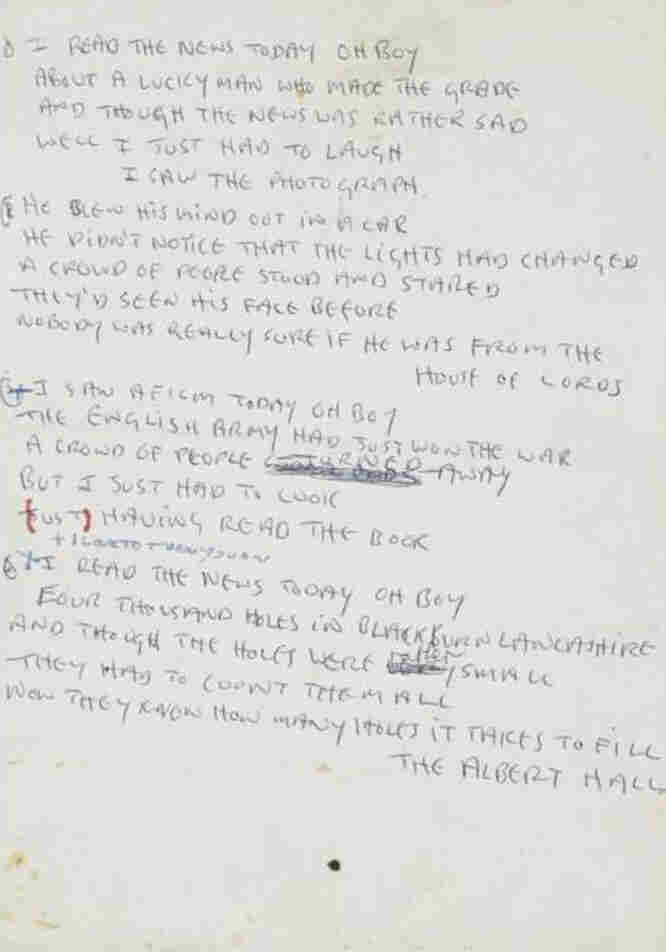 John Lennon's manuscript for the lyrics of the song "A Day in the Life" from the "Sgt Pepper's Lonely Heart Club Band" album was sold by Sotheby's for $1.2 million. Sothebys hide caption

A collector has purchased for $1.2 million John Lennon's handwritten manuscript of the lyrics of one of The Beatle's best-known songs, "A Day in the Life," written by Lennon and Paul McCartney.

The song anchored the group's seminal album "Sgt. Pepper's Lonely Hearts Club Band." "A Day in the Life" had the dubious distinction of initially being banned by the BBC because the line "I'd love to turn you on" was seen as an illegal drug reference.

Sotheby's didn't identify the collector who purchased the item which had been estimated to bring in between $500,000 to $800,000.

Here's how Sotheby's described the document on the auction house's web site:

Autograph manuscript of John Lennon's lyrics for the "A Day in the Life," the final track on the Beatles' 1967 album Sgt. Pepper's Lonely Hearts Club Band, 2 pages (10 1/2 x 7 5/8 in.; 267 x 194 mm) on a single sheet of unruled writing paper, [London, 17 January 1967], comprising 2 complete sets of the lyrics written in black felt marker and blue ballpoint pen, several autograph emendations and corrections (a few of these in red ballpoint pen): (1) the recto bears Lennon's original first draft, written in a hurried but fully legible cursive script; (2) the verso bears an autograph fair copy written almost entirely in capital letters and evidently prepared for use in the recording studio, incorporating the emendations from the first draft and adding three further ones, numbering the verses 1-4, and indicating the insertion of the phrase "I love to turn you on" after the third verse. A short mended tear at center top margin and tiny hole in center lower margin, neither affecting text, some light marginal stains. Matted, framed, and double-glazed.

Sotheby's also provides a detailed, scholarly analysis of the song's place in the music of the Sixties and among Beatles' works, a must if you want to get the highest price for such an item.

Acclaim for the song has been near universal. "A Day in the Life" has been compared to Eliot's "Waste Land" and Picasso's "Guernica." Paul Gruskin's Rockin' Down the Highway calls it "one of the most ambitious, influential, and groundbreaking works in pop music history." "A Day in the Life" is all of that and more, and at the song's center—and paradoxically at its foundation as well—are these two pages of John Lennon's handwritten lyrics. They provide the song's gravity and dignity and significance.

Sotheby's indicates the manuscript came from a descendant of Mal Evans who's variously described as a Beatles' roadie or assistant.