Accessibility links
LeBron James : The Two-Way Two-time NBA MVP LeBron James tells a live TV audience that he will leave his hometown Cleveland Cavaliers to play for the Miami Heat. The decision by James, 25, ends one of the wildest spectacles of sports speculation in memory. 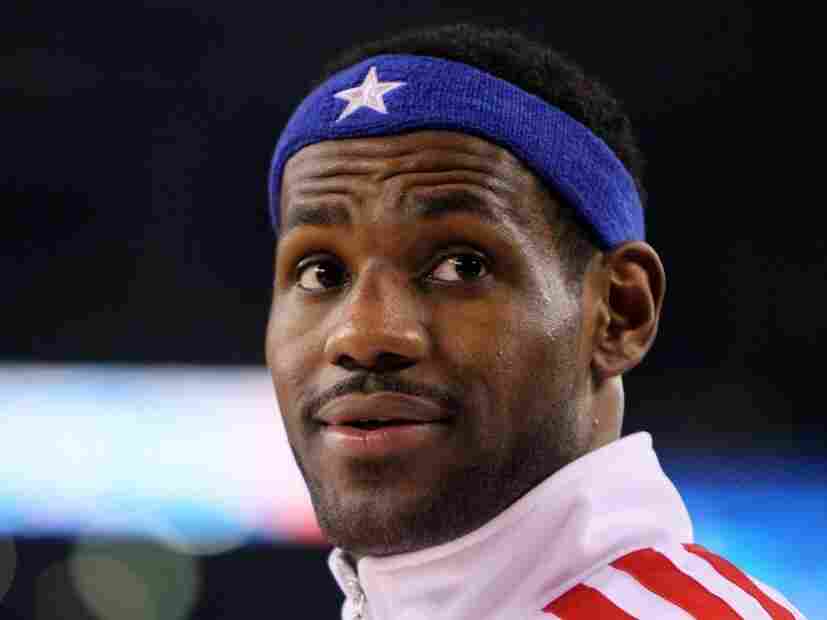 LeBron James is taking his world-class basketball skills to Miami where he'll play for the NBA's Heat, the superstar known as King James just announced on ESPN.

LeBron said he reached his decision this morning. "I woke up and had a great conversation with my mom," he said, and then made his choice. A major factor in his thinking: It was the chance to get a championship ring and "win now."

We'll have more about this shortly, so be sure to hit your "refresh" button.

Update at 10:10 p.m. ET: The ESPN "special" is wrapping up. Near the end, LeBron was asked about another announcement he wanted to make. That news? He said "the proceeds" from tonight's broadcast — presumably, revenue from the many ads that ran — will be going to the Boys and Girls Clubs of America.

NPR's Tom Goldman, by the way, will have more about LeBron's decision and what it means on tomorrow's Morning Edition.

LeBron just said on ESPN that the three stars will "raise each others' intensity. ... We're going to lift each other up."

Those three were among the driving forces on the USA's gold-medal-winning team at the 2008 Olympics in Beijing.

And, after being shown video from Cleveland of folks already burning replicas of his Cavaliers jersey, the 25-year old north Ohio native said "I can't get involved in that. ... I wanted to do what was best for LeBron James. ... I had seven great years in Cleveland and I hope the fans understand that."

Update at 9:45 p.m. ET: How long a contract will LeBron have with the Heat? "The numbers are not finalized," he just told ESPN's Michael Wilbon. But, he added, all three of the Heat's stars — himself, Dwyane Wade and Chris Bosh — have taken less money to play together than they could have got if they'd gone elsewhere (or, in LeBron's case, stayed in Cleveland).

"I expect to win," LeBron said. "We want to win it all. ... The only reason we play this game is to win championships."

Update at 9:36 p.m. ET. The headline in Cleveland, from the Plain Dealer:

And the headline in Miami, from the Herald:

"Three For The Show! LeBron Joins Wade, Bosh On The Miami Heat."

Update at 9:32 p.m. ET: "You feel like you've let a lot of people down," LeBron said of leaving Cleveland and northern Ohio, where he grew up.

For those who really, really care about where basketball superstar LeBron James chooses to play next year, the wait is almost over.

And for those who are really, really tired of all the attention and hype "the decision" has been getting, the wait is almost over.

If you've somehow managed to avoid hearing about all this, NBA free agent James, 25, is going on ESPN at 9 p.m. ET to tell the world whether he's a) staying with the Cleveland Cavaliers; b) going to the Miami Heat, where he would join two other world-class players, Dwyane Wade and Chris Bosh, in what would become one of the presumed teams-to-beat; or c) taking his game to some other club, such as the Chicago Bulls or New York Knicks.

You can, of course, watch the "special" that ESPN's airing. Or, you can stay with us. We'll update this post with the news as soon as King James announces his decision.

Meanwhile, there's still time to express your opinion in our very unscientific survey, which closes at 9 p.m ET:

And, if you want to see how some of the cities involved react, you might also check out the websites of:

We'll be back with the news. Be sure to hit your "refresh" button.

TELL ME MORE: Would Cleveland Really Miss LeBron James? July 8, 2010
MONKEY SEE: How To Fill The Other 59 Minutes And 45 Seconds Of The LeBron James Special July 8, 2010