Accessibility links
Indian Rupee Gets Its Own Symbol : The Two-Way It joins the dollar, yen, euro, and pound.

Indian Rupee Gets Its Own Symbol

Indian Rupee Gets Its Own Symbol

'til today, the Indian rupee didn't have one of its own.

In 2009, designers were invited to participate in a national competition, "to come up with a symbol that captures the ethos and culture of India." Some 3,000 people participated. 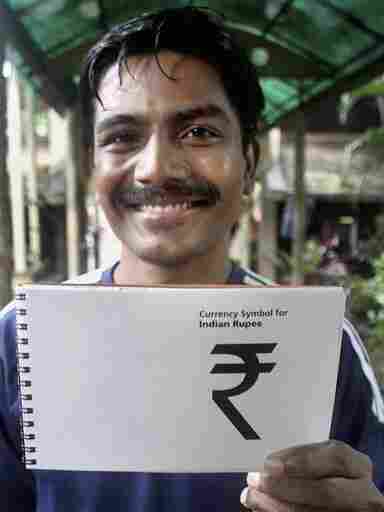 According to the BBC, "a panel of artists, officials and bankers picked the new design," which "is made up of half the letter R with a horizontal line on top and in between to make it also look like its equivalent in the Devanagari script, which is used in a number of Indian languages including Hindi and Sanskrit."

Heather Timmons, reporting for The New York Times, says "it looks like a capital letter R, minus its vertical leg, and with two added horizontal lines through the upper, curved portion."

D. Udaya Kumar, a research scholar at the Indian Institute of Technology, designed it. He has earned a monetary reward and a faculty appointment.