Accessibility links
Intelligence System Is Intractable, Wildly Expensive, 'The Washington Post' Reports : The Two-Way "No one knows how much money it costs, how many people it employs, how many programs exist within it or exactly how many agencies do the same work," Dana Priest reports. 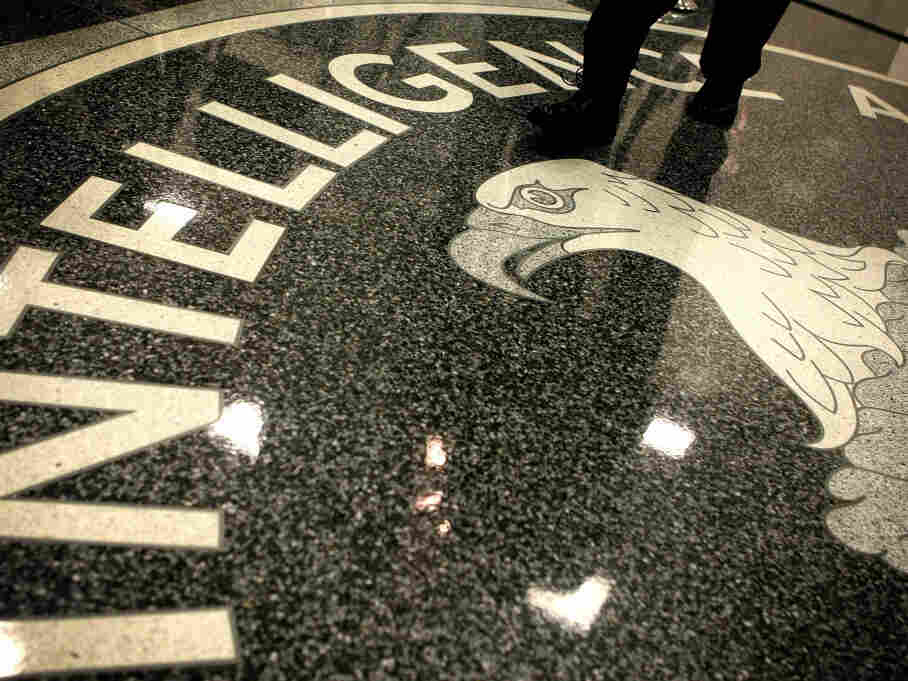 The seal of the Central Intelligence Agency at the lobby of the Original Headquarters Building at the CIA headquarters. Alex Wong/Getty Images North America hide caption

Good morning! The biggest story of the day is the first installment of "Top Secret America," a three-part series in The Washington Post, co-reported by Pulitzer Prize-winner Dana Priest, about how sprawling and intractable the national security and intelligence system has become since Sept. 11.

According to Priest and William W. Arkin, "The top-secret world the government created in response to the terrorist attacks of Sept. 11, 2001, has become so large, so unwieldy and so secretive that no one knows how much money it costs, how many people it employs, how many programs exist within it or exactly how many agencies do the same work."

These are some of the findings of a two-year investigation by The Washington Post that discovered what amounts to an alternative geography of the United States, a Top Secret America hidden from public view and lacking in thorough oversight. After nine years of unprecedented spending and growth, the result is that the system put in place to keep the United States safe is so massive that its effectiveness is impossible to determine.

In Washington, there was plenty of buzz about the series before it hit newsstands -- and the Web -- this morning. Last week, The Atlantic's Marc Ambinder wrote, "Whenever Dana Priest writes about national security, the earth moves."

When Priest disclosed the existence of the CIA's black sites, the program was shut down and policies were changed. When she wrote about the mistreatment of veterans at Walter Reed Army Medical Center, generals were fired and veterans got better care.

You can listen to an interview with Priest on WNYC's The Takeaway here:

"After three days of encouraging pressure tests, a senior BP official said Sunday that the company’s recently capped well in the Gulf of Mexico was holding up and that BP now hoped to keep the well closed until it could be permanently plugged," Henry Fountain reports. "But government officials were more skeptical and cited a new potential problem."

Over the weekend, the government detected a seep -- "usually a flow of hydrocarbons," The Times explains -- "a distance from the well." (Here's a letter to BP, from retired Coast Guard Admiral Thad W. Allen.)

"Federal authorities investigating BP PLC's oil spill in the Gulf of Mexico are zeroing in on bad decisions, missed warnings and worker disagreements in the hours before the April 20 inferno aboard the Deepwater Horizon that spawned one of the worst environmental disasters in U.S. history," Russell Gold writes. The Journal obtained an internal document that details more than 20 behavioral anomalies related to the well.

-- "Haiti quake anchors many to US, while others drift," The Boston Globe

"The earthquake that devastated Haiti has created a two-tiered system among the most vulnerable Haitian immigrants in the United States," Maria Sacchetti writes. "Thousands of immigrants in the country before the quake, including those here illegally, are becoming formal members of society, eligible for driver’s licenses, work permits, and in-state tuition at state colleges."

Those who fled its aftermath -- some on US military flights -- are entitled to none of those things, and face an uncertain future.

Sixteen public intellectuals -- from Alan Blinder to Jim Hoge to Joseph Stiglitz -- call upon the government "to replace the lost purchasing power of the unemployed and their families and to employ other tax-cut and spending programs to boost demand."

Making deficit reduction the first target, without addressing the chronic underlying deficiency of demand, is exactly the error of the 1930s. It will prolong the great recession, harm the social cohesion of the country, and continue inflicting unnecessary hardship on millions of Americans.